We take the actress, committed singleton and sexual trailblazer for a night out on the town. 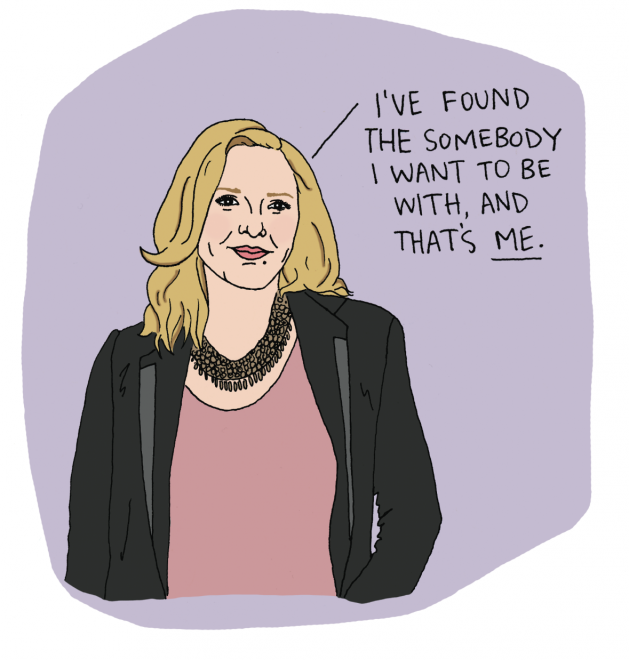 I’d like to begin our date by wishing you an early happy birthday. You celebrate the big six-oh in August. Any plans?

Not yet, but I’m always up for celebrating, especially the landmarks in my life. I like to celebrate with the people who have been there over the years, supporting me and loving me and giving me what for when I needed it.

As you enter every new decade, there is a feeling of a new beginning and, Oh, what will this be about? In the younger decades, I was so focused on work and travel and experience. I see more of that in my future, but also taking time just for me. I appreciate being in good health, physically and mentally. At this stage, it’s less about what should I be doing, and more about what tickles my fancy, what makes me get up in the morning.

You have been credited with revolutionizing sex for women over 40. What do you want to revolutionize for women in your current age bracket?

I want to show that we are still viable, still sexy and still confused. That’s just part of being human. You think you’re going to reach a certain age and become this wise person on the mount. That is true to a point, but you’re still trying to figure it out.

I recently saw you referenced as “the poster girl for fulfilled singledom.” Do you see yourself that way?

“Poster girl” is way too much responsibility. I do enjoy being single — there’s less guilt in being single. Earlier in life, society is interested in having you pair up, have kids, buy new things, be a consumer. At this age, it’s sort of carte blanche. You don’t have the dream of forever. You’d like to find someone to spend time with, who you can see two or three times a week instead of having to cohabit and do each other’s laundry.

As far as a man to spend time with, has the checklist of what you’re looking for changed over the years?

Well, first of all, I’m not looking. I think the idea of “looking” implies some kind of agenda. I don’t have one. I’ve found the somebody I want to be with, and that’s me. I would say that as you get older, making an emotional or intellectual connection so outweighs a sexual one.

On your TV show Sensitive Skin, your character, Davina, suddenly finds herself single. What does it mean for her to start over after 30 years of marriage?

I think she’s realizing that life throws you a lot of curves, but also that at a certain age, there is a survivalist instinct that starts to exist within you. You become more of a stable force within yourself. That means that when you’re in a situation like dealing with the death of a spouse, as disastrous as that is, you know it will be okay.

There is a line in the second episode where another character tells Davina, “The only person you ever really get to know in life is yourself.” Do you think that’s true?

I think it’s impossible to crawl inside of somebody’s head. And maybe that’s a good thing.

Samantha Jones famously advocated for having sex “like a man,” meaning sex that’s about physical pleasure, not romance. Have our notions around gender and sex changed since then?

I hope they have. I’ve never been attracted to having sex with a stranger, but now they have sites where you can do that. I hope that we are at a place where we can acknowledge that women have appetites and don’t need to be restrained or tamed in any way. Orgasms are good for you, and you get the amazing experience of being physically that close to someone.

I’m sure you are aware of the convention where people are asked to categorize themselves according to the characters of Sex and the City, so I have to ask . . .

I’m all four. I think most women are. Together those four characters make up a complete woman.

FILED UNDER: Sensitive Skin Sex and the City