The income linked to the happiest marriages

Would you marry a man who makes less money than you? A new book shows the financial dynamic that statistically leads to successful relationships. 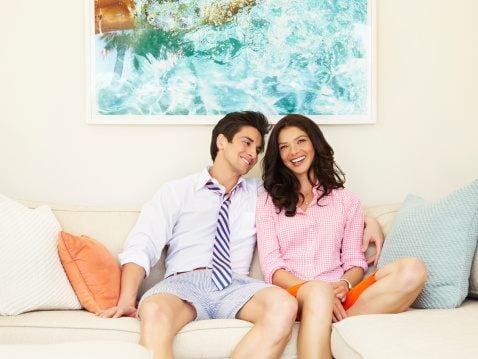 In her new book, Dollars and Sex: How Economics Influences Sex and Love, economics professor Marina Adshade applies the principles of supply and demand to the world of sex and love. We asked Marina to weigh in on the issue of disparate incomes and educations, marriage as a way to get more stuff, whether female breadwinners are the way of the future and if any of those things matter for happiness.

Q: Do most heterosexual women still prefer to marry a partner who makes more money?
A: A matchmaking friend of mine tells me that the women she sees not only prefer a partner who makes more money, but one who makes significantly more. This preference is unfortunate in an era in which women are so much better educated than men are, since it leaves smart, higher income women searching and searching for that ever-illusive high-income man. This belief that we, as women, should marry good earners originated in an era in which men provided for women who stayed home and cared for their families. Today, many women who are able to earn a good income might actually be better off if they married a partner who is less focused on his career; there is something to be said for having a partner whose job is flexible enough that they can do their share of work at home.

Q: When the man has a higher income does it typically mean a more successful relationship?
A: There is no evidence that relationships in which the husband earns more than his wife are happier marriages. In fact, the happiest marriages appear to be between people who are very similar to each other in a variety of different ways, including age, education and income.

When couples have more similar incomes, the power to make decisions on issues that really matter to families is more evenly shared between husband and wife. Where couples live, how many children they have, how household chores are divided and how often they have sex are a few of the decisions women have more say in when they have an income that is close to their husband’s.

While marrying a man who earns more money than you will make you wealthier, if you really are looking for “until death do you part” you are probably better off with someone who earns a similar income to yourself.

Q: Can you explain the theory that people get married as an opportunity to consume more?
A: This is an important story because it goes a long way in explaining why we continue to marry despite the fact that the historic advantage of marriage — to allow one person to specialize in earning income while the other person specialized in caring for the family — is no longer the norm. Now people marry because marriage makes it possible to both consume more goods and services, and to derive more happiness from that joint consumption.

I like to think of marriage like taking a trip to Italy — not only is it cheaper for two people to go together than it is for two people to go alone, but generally that experience is also more enjoyable when it is shared. Any divorced parent can attest that raising children, as an example, is less expensive if there is one household rather than two and most will agree that sharing the experience of having children with a partner is better than doing it alone.

In Canada today, for every 100 male students in university there are about 135 female students; the gender imbalance has favoured women for the last three decades. Increasing female education levels, along with the narrowing of the gender wage gap, means that in the future more and more marriages will be one in which the female partner brings home most of the bacon.

Q: Can you explain how the educational divide between men and women might influence future pairings?
A: You can probably tell that when it comes to the future of marriage I am an optimist. Economic forces are changing the way that we organize our relationships and eventually social norms will adapt in the sense that couples will be free of the constraints of traditional gender roles and other preconceptions about suitable pairings. That may seem like a dream, but given how much social norms around sex outside of marriage have changed as a result of similar economic forces, it is possible.

Speaking of evolving social norms, marriages in which both partners are the same sex are a pretty good indicator of where heterosexual marriage is heading. In those marriages it is the individuals, not society, that dictates the nature of their relationships.

Tell us, do finances matter to you when starting a new relationship?