What you can do to prevent contracting E. coli

Europe is currently in the grips of an outbreak of E. coli larger than the continent has ever seen. The outbreak is centered in Hamburg, Germany and began in May, but has since spread to eight European countries, making over 1,500 people sick. So far there are 16 confirmed deaths tied to the outbreak. 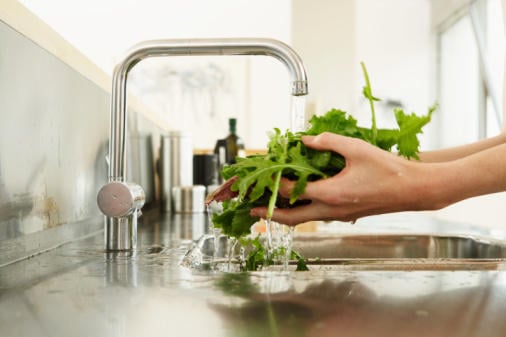 Europe is currently in the grips of an outbreak of E. coli larger than the continent has ever seen. The outbreak is centered in Hamburg, Germany and began in May, but has since spread to eight European countries, making over 1,500 people sick. So far there are 16 confirmed deaths tied to the outbreak. Chinese scientists say that the European outbreak is the result of a dangerous and highly infectious new strain of the bacteria.

According to the European Center for Disease Prevention and Control, the large number of cases points to a large-scale contamination in the food chain, likely of vegetables — one that could have happened “anywhere from farm to fork.” Naturally, that kind of news is frightening to consumers: the idea that at any point in the system, even in our own kitchens, our food could become contaminated in a way that makes us sick — perhaps even lethally ill.

E. coli are bacteria that live in the lower intestines of animals like cows and chickens. Some strains of the bacteria are beneficial, but others cause illness in humans that can lead to cramping, diarrhea and in severe cases, death.

Three types of food, if contaminated, can cause an E. coli outbreak: meat, milk and vegetables. Humans become sick with E. coli when they eat food that has been contaminated, either because it is from an animal that was infected with the bacteria or because it was from produce that came into contact with manure from an infected animal.

The symptoms of E. coli infection can show up anywhere from a few hours to ten days after eating contaminated food. If you experience severe abdominal cramping or have bloody stools, nausea, fever or vomiting, you may have contracted E. coli. Other people show no symptoms but can still spread the highly contagious bacteria to others.

Most people who contract E. coli recover within two weeks, but some develop a severe kidney condition that can be fatal. The very young, the elderly, pregnant women and those with compromised immune systems are most at risk of suffering the bacteria’s more severe consequences, including death.

The good news is that there is a lot that we, as consumers, can do to prevent ourselves from getting ill due to E. coli contamination in our food. Here are some steps you can take to prevent infection: