What kind of fighter are you?

Whether we’re arguing over inane things (C’mon, why haven’t you taken out the trash yet?) or more heavyweight subjects (Okay, okay, take my credit card and I’ll stop with the shopping for awhile) the hubby and come at it with very different fighting styles. 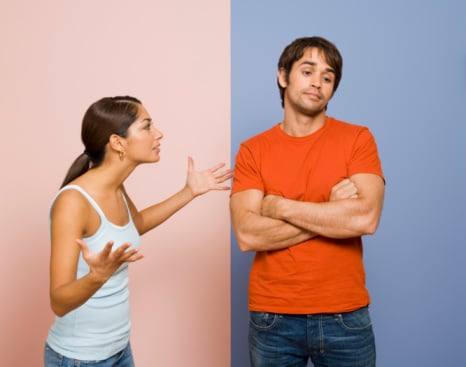 Anyways. With our two kinds of arguing styles, it often makes our debates that much more heated and over the years it’s left me wondering—which style is better? My theory was if we hash it all out at once and deal with issues right away, then we can move on to our happy place, so to speak. Purging the anger should be good right? Releasing anger is a step towards healing right? Because everything’s laid bare on the table and you can deal with it and then move on to snuggle up and watch the The Big Bang Theory.

Not exactly, as it turns out. I asked Dr. Kimberly Sogge, the Ottawa-based chief of psychology professional practice at the Royal Ottawa Health Care Group to confirm (or deny) my suspicion that letting anger out allows for healing and happiness to come faster.

“Definitely having a “full experience” of anger is a step towards happiness but releasing it can lead to reactivity and damage to the relationship, which in turn causes pain as well,” says Dr. Sogge. “So the pain of anger is inevitable and there’s good research on women who withhold in relationships having a shorter life expectancy vs. women who process in relationships, but I think it’s important not to engage in damaging patterns.”

That means patterns such as resorting to “You always…” type statements or “kitchen sinking it” (where you bring up just about everything but the kitchen sink). So how do we release our anger positively and move on from what’s happened? Here’s what Dr. Sogge suggests:

1. Experience the anger. Let yourself be angry and maybe even use a statement such as “I’m really angry right now because…”

2. Sidestep old habits. Be conscious of how you usually fight and that awareness can help bypass old fighting habits i.e. the kitchen sinking.

3. Watch yourself. Try to cool the physiological affects of being angry i.e. holding your breath, tensing your body, speeding your heart rate up. Instead, Dr. Sogge suggests slowing your breathing pattern or even removing yourself from the situation until cooler heads emerge.

Sounds easy right? Dr. Sogge admits habits don’t break immediately and that this can take time. But the sooner you master moving past the anger healthfully, the faster you’ll be to your happy place, whether that includes Sheldon and the gang or not.