Play this game to add 10 years to your life

In this TED video, game designer Jane McGonigal explains how she created a resilience-boosting game that helped save her life. 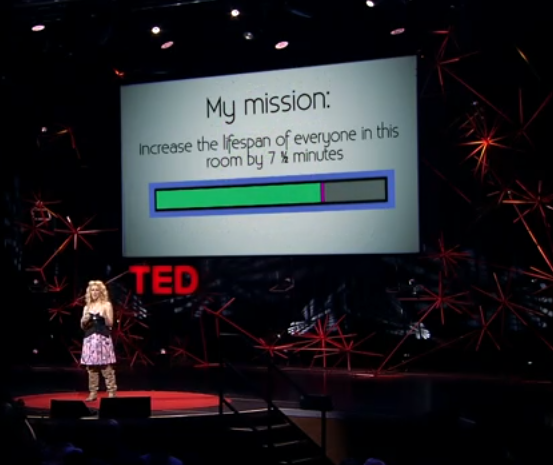 Angry Birds may keep you occupied during your commute but can it boost your resilience to suffering, make you stronger, happier, feel more connected and add years to your life?

Probably not. But the healing game SuperBetter may just do that, or at least that’s what the game’s designer Jane McGonigal is saying in her 2012 TED talk.

McGonigal wants to make gaming a “force for good in the world”, not a waste of time but an affirmation of it. To that end, she promises her audience and those watching her talk that she could add 7.5 minutes to their life. To get the extra time she leads them through her game, SuperBetter.

The idea for SuperBetter came to McGonigal at her lowest point. She suffered a debilitating concussion that left her bedridden for three months and contemplating suicide. To heal, she created a game called Jane the Concussion Slayer. When she played the game, which saw her taking on her symptoms and conquering them as a heroine rather than a victim, she noticed she felt better. Her symptoms remained but she felt happier and her depression lifted.

She decided to post the game online and renamed it SuperBetter. Soon she began to hear from people all over the world. People dealing with cancer and terminal illnesses began to write and tell her that playing the game made them feel better.

McGonigal began to research the phenomenon and discovered that there were scientifically valid reasons for why people were experiencing spiritual and emotional relief from SuperBetter.

That reason: it encouraged what experts called “post-traumatic growth”. Post-traumatic growth is a positive side effect of suffering. People who report that disease or suffering has made them stronger and wiser, who feel more connected and more focused on their dreams and goals, have experienced this phenomenon.

And it turns out there is a path to achieving this growth and it involves the daily affirmation of four resiliences, which are physical, mental, emotional, and social resilience. Science indicates that people that regularly boost these four aspects live a full decade longer than those that don’t.

To experience that boost, McGonigal walks the audience through her resilience boosting game (it starts around minute 12 of the video). Just by playing along you’ll earn 7.5 minutes of your decade (through some intense math McGonigal works out how much time resilience boosters earn in an hour). Earning the rest is up to you, however you choose to experience your four resiliences. Watch the video: