Ready for your annual checkup at the doctor’s office of tomorrow? Imagine incredible shrinking X-rays and superbug-zapping robots. Here’s a preview of what's to come. 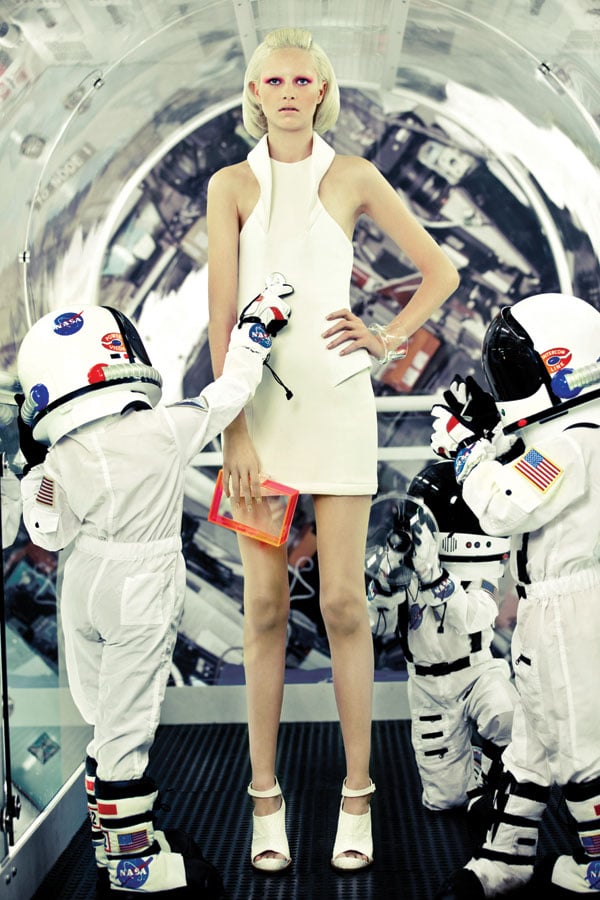 See how the medical industry is advancing before our eyes. (Photo, Trunk Archive.)

1. Diagnose disease before it strikes (Available now)
With a simple mouth swab, genomicists can now sequence more than three billion base codes of your DNA. Known as genomic and epigenetic testing, the process reads you (and your 21,000 genes) like a book, scanning for early signs of disease (think of them like tiny typos) to help doctors take a proactive approach and tailor treatments specifically for you. “It enables us to make the best possible choices,” says Dr. Mansoor Mohammed, geneticist and founder of YouNique Genomics.

2. Ouch-free shots (In 5 to 10 years)
Needles may soon be needless! Jab-free vaccines and flu shots promise to take the pain out of checkups. British researchers have devised a simple way to deliver a live vaccine (dried in sugar!) with a patch applied to the skin just like a sticker.

4. Error-free surgery (In clinical trials)
Introducing iKnife, a smart scalpel developed by researchers at Imperial College London. It provides near-instant feedback to help surgeons distinguish between cancerous and healthy tissue surrounding tumours as they excise them from the body. The scalpel works by analyzing molecules of the smoke caused by heat generated in surgery, then signalling to surgeons if it’s cancer-free. In this way, iKnife is eliminating the margin of error and making surgery less invasive. Its success rate stands at 100 percent in 91 recent operations.

5. Fast-fix casts (In development)
If Spider-Man designed casts to heal broken bones, they’d probably look like the new Cortex casts. The prototype from New Zealand features a plastic exoskeleton with a web-like open-weave structure made using a 3-D printer. As a result, each Cortex cast can be custom-designed to bolster each fracture or break wherever it needs the most support. Here’s how it works: Once a broken bone is viewed under an X-ray and 3-D scanner, special software sketches the optimal cast and sends the blueprint to a 3-D printer. Plus, it’s waterproof — so no more showers with a plastic bag over your cast!

7. Tuning in to blood with sound waves (In 10 years)
Blood tests may soon involve a newfangled tool that listens to your cells! When Ryerson University researchers beamed a laser on red blood cells, the cells emitted high-frequency sounds. Based on the sound waves, the researchers were able to identify wonky-shaped red blood cells that are classic markers of disease. “We think we’ll soon be able to analyze hundreds of thousands of cells in a matter of seconds,” says researcher Michael Kolios. In the future, they hope to test the technique to detect tumours, which could speed up leukemia diagnoses.

8. Pocket-sized doctors (In 2014, pending approval)
No more waiting in waiting rooms! DIY diagnosis is putting good health in your hands, thanks to the latest gadgets inspired by Star Trek. The Silicon Valley giant Scanadu has developed three new devices (each around $200) that are set to revolutionize health care. The first to reach FDA testing is Scout, a quick-touch reader that fits neatly in your palm and tests blood pressure, body temperature and heart rate when you press it to your forehead. You can send a snapshot directly to your smartphone and on to your doc. Other devices in development are Scanaflo, a unit that tests urine for pregnancy complications, kidney failure and UTIs; and Scanaflu, which analyzes saliva for strep and flu viruses. Both units have family-friendly disposable testing attachments. “These three devices allow you to be your own first-line care provider,” says Dr. Alan Greene, Scanadu’s chief medical officer.

9. Make the immobile mobile (In development)
An exciting brain stimulator could help get paralyzed patients moving again. MyndTec, in Mississauga, Ont., created MyndMove, a non-invasive device that uses electrical therapy to retrain the brain to restore voluntary movements, like reaching and grasping. After just eight weeks, patients noticed amazing improvements in their quality of life. And the tool has caught the attention of the Canadian government, which just invested almost $1 million to aid in its commercial development!

10. Incredible shrinking X-rays (In 2017)
A new X-ray generator is giving doctors a special inside look, and it’s the size of a stick of gum. Designed by Dr. Scott Kovaleski and a team of grad students at the University of Missouri, the mini-ray machine could revolutionize medical imaging by eliminating bulky equipment. Kovaleski hopes it will one day be used everywhere from the sports field to the battlefield.

11. Fix broken hearts
An Ontario start-up is empowering heart failure patients, so they never miss a beat — literally! Nicoya Lifesciences developed an app that tests vitals with a pinprick and a smartphone. After a drop of blood is squeezed into a special cartridge and inserted into a pocket-sized reader that attaches to a phone, it’s analyzed and wirelessly shared with the patient’s health care team. Over six million North Americans have congestive heart failure, but founder Ryan Denomme is confident of the tester’s success. “Our device could cut re-hospitalization rates by up to 5o percent and death by 30 percent.”

12. Edible electronic pills
Gulp! Battery-powered medicinal capsules, outfitted with simple sensors, may soon replace some prescriptions. And they’ll have the ability to send updates to our smartphones — handy when it comes to showing docs we’re taking our meds! The edible electronics are made with stomach-friendly materials. And that’s just the beginning: “We are expanding edible electronics to deliver drugs in a way that bypasses the harsh environment of the stomach,” says Christopher Bettinger, a researcher at Carnegie Mellon University.

13. HIV virus combats cancer (In research)
Seven-year-old Emily Whitehead’s cancer treatment at the Children’s Hospital of Philadelphia went viral last year when a modified form of the HIV virus was used to insert new genetic material into her T cells. The result? The modified T cells helped her immune system attack her acute lymphoblastic leukemia. Developed by a team at the University of Pennsylvania, the treatment is in clinical trials. And Emily’s not the only success story: Nine out of 12 patients in a 2012 study are now cancer-free after their immune cells were dosed with the virus. The technique is not without risks, but being infected with HIV isn’t one of them. In a unique twist, while the modified HIV virus may attack cancer, Harvard researchers say a cancer treatment may fight HIV. New research presented at the International AIDS Conference shows that two HIV-positive men with cancer who were given bone marrow transplants had the HIV levels in their blood drop to undetectable amounts. A year on, both men have stopped taking medication to control their HIV. Doctors can’t say for sure that they’re cured, but extensive tests still can’t find any trace of HIV.

14. Cure for blindness (Coming this year, with higher-quality implants by 2017)
The first “bionic eye” is now approved for worldwide use after 20 years of research! It’s for those with retinitis pigmentosa, a degenerative disease that can lead to blindness. Argus II is a system of electrodes implanted in the retina, paired with glasses linked to a built-in video camera. The camera turns images into pulses, which the electrodes read as light patterns, allowing the brain to “see” movement and objects. It’s bulky, but not for long: Researchers are working on camera-free alternatives with retinal implants that look like computer chips.

15. Microchip organs (In 10 years)
Harvard researchers have created a “spleen on a chip” that cleanses blood and fights infections — just like a real spleen! Using magnetic nanobeads coated with an engineered version of a human-blood protein, the microchip binds to and removes a variety of bacteria, fungi, viruses and toxins. “This research could save lives . . . even in patients with antibiotic-resistant organisms,” says Professor Donald Ingber, director of Harvard’s Wyss Institute. Way to go, super spleen!

16. High-definition ultrasounds (Coming soon)
No more speckly little peanuts: HD ultrasounds will transform the way we see our babies for the first time. HDLive software, developed by General Electric and tested by Dr. Bernard Benoit at Princess Grace Hospital Centre in Monaco, uses dynamic rendering to create detailed, anatomically accurate images. It displays realistic colour and skin texture in crystal-clear 3-D images and uses a virtual light source (think high-tech flashlight) to enhance the details. Plus, the crisp snapshot allows doctors to detect and diagnose potential health issues sooner. GE already uses HD in two of its ultrasound systems, and there are plans to expand the technology to other units.

17. Wearable hugs squeeze away stress (Coming soon)
An inflatable hugging garment called BioHug doles out cuddle cures. It’s a unique alternative to managing stress in people with autism, say Israeli researchers. The vest is lined with air pockets that expand to create a hug-like sensation, and wearers can program the vest to deliver random or on-demand squeezes. In clinical studies, BioHug reduced major markers of stress within minutes. Because of its relaxing effect, doctors are sizing up BioHug for those with chronic pain.

18. Memory manipulation heals trauma (In research)
Remember the movie Inception, when the idea of implanting memories changed how we thought about dreams? It’s now happening in real life. Scientists recently implanted false memories into the brains of mice. They tricked them into wrongly perceiving a safe environment as dangerous. Here’s what it means for us: Memories are stored in collections of cells, and now we’ve discovered we can “rewire” those cells using pulsating optic fibres. Think of them as throbbing strobe lights in a dance club, minus the rave music. This means one day we might be able to reduce the fear or upset associated with devastating mental conditions like schizophrenia or PTSD using “memory transplants.”

19. Battery-operated brains (In testing)
Behold the man with a battery-operated brain: Andrew Johnson, 39, diagnosed with early-onset Parkinson’s. New Zealand doctors nicknamed him Cyber AJ, after they implanted electrodes in his head to control his tremors. The electrodes target wayward neurons and silence his shakes and tics, all with the simple flick of a button designed to trigger deep stimulation within Cyber AJ’s brain. How does it work? Special electrodes are connected to a stopwatch-sized unit hooked up to a pacemaker near the heart.

20. Robotic maids mop up superbugs (In 5 years)
Two new robo-cleaners are sweeping in the next generation of cleanliness in hospitals. The Xenex robotic duo, better known as Ralph and Little Joe, stand three feet tall and can annihilate stubborn germs by releasing ultraviolet rays from their telescopic heads, like real-life Terminators. Ralph and Joe have been tested in hundreds of U.S. hospitals, and in separate studies they reduced bacterial contamination by 50 percent and microbial dirt by 62 percent. For now you can find them at Gottlieb Memorial Hospital and Loyola University Medical Center in Illinois, but the plan is to outfit more hospitals in the future.

For more on the future of medicine click here.