Skip the cardio, try this 20-minute workout miracle instead 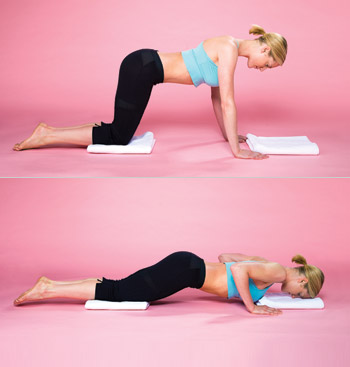 Barely have time to eat and sleep, let alone exercise? Don’t sweat it. Thirty minutes a week is all you need to battle the bulge and get Kylie Minogue’s aerobicized physique. That’s the gist of an offbeat weight-training technique called slow burn. Hard bods such as Brad Pitt have been doing it for years, and now the strength workout is making its way to Canada.

Forget the decades of brainwashing that have taught us to equate fitness with hours on the treadmill, butt-busting spin classes or a complex aerobics routine. Unlike all that high-impact drudgery, a slow-burn workout involves slowly raising and lowering four or five different sets of very heavy weights that target your major muscle groups.

You can do them at home or with a personal trainer. But be forewarned: Only a few trainers in Canada are certified in a version of slow burn called Super Slow, a fitness technique developed by former fitness researcher Ken Hutchens.

Slow burn is a little unconventional. Clients who opt to train with a pro work out one-on-one in a cold, climate-controlled room on specially designed exercise machines. Sweating is a no-no since it can lead to accelerated muscle fatigue. That means fans are aimed at you at all times. It’s a bit like being in an Arctic fashion shoot in December, sans coat.

Like the name suggests, you do a slow burn workout at a glacial pace. It takes about ten seconds to raise each weight and another ten to lower it. Sound too easy? Then try moving those weights for minutes at a time, with no rest between reps. When you’re done the 20-minute circuit, total muscle failure means you can barely budge. And the weights are increased each week so you don’t get too used to them. “It’s really hard but it’s over in a short period of time,” says Halifax-based trainer Nick Matheson.

How does this get you into better shape than, say, training for a half marathon? You hobble away from your 20-minute workout with muscles so spent they take the rest of the week to recover, building up more fat-burning tissue while you work, play or sleep. “The time between the workouts makes the difference,” says Super Slow trainer Gus Diamantopoulos.”Your new muscles are building themselves during that week-long break, and you’re burning calories at rest.”

Slow burn’s quick results are more medical science than workout fad. Debbie Maduri, a Toronto-based osteopath, says the most effective exercise “should be a high load with low repetition,” much like the slow burn technique. She says heavy weights stress each area, causing new bone growth and new muscle tissue.

A Super Slow workout with a trainer can set you back $50 to $100 per session. Or you can buy The Slow Burn Fitness Revolution and try the exercises at home. All you need is a fan, some weights, a stool and a couple of towels.

Point a fan at yourself during the workout so you don’t overheat. If you have a timer, set it for a longer interval each time you exercise. And go extra slow during the first three seconds of each move; they’re the most important.

Place a towel folded into a square where your forehead will touch the ground, and another one under your knees. Kneel down and place your hands shoulder-width apart. Your body should resemble a table. Move into a push-up position, keeping your elbows locked, taking 10 counts to reach the ground. When your forehead touches the towel, reverse immediately and take 10 counts to move back up to the original position. Continue until you can’t raise yourself.

Place a stool two feet away from the edge of a door. Open the door halfway and grab both doorknobs in an underhand grip at arm’s length. Slowly begin to lower your body, moving down for seven counts until you touch the stool with your butt, but do not sit. Without stopping, slowly rise in seven counts. Repeat until you can no longer rise from the stool.

Firmly attach an ankle weight to one ankle (start with five pounds). Place both hands on a stool in front of you. Keep your supporting leg straight and the knee you’re exercising slightly bent. Slowly bend your knee in at least seven counts, until your heel is close to your butt. Slowly lower again in seven counts. Stop only when you can no longer bend your knee.

Stand facing the stool, one foot forward. Place one hand on the stool. Lean forward at a 45-degree angle, arching your back. Using a five-pound weight or a four-litre water jug as a weight, slowly pull the weight back and then lower it, moving one inch per count without pausing or letting the weight hang down. Stop when you can no longer move the weight.

Roll two towels together to make a six-inch thick support for your lower back. Place another folded towel under your head. With arms straight out in front and chin tucked into chest, slowly curl your torso up and forward. Pause when your fingertips touch your knees, squeeze your muscles for three counts then slowly lower your torso, doing your best to do it in seven full counts. Don’t rest at the bottom and keep moving until you can’t any more.

Roll two towels and put them side by side under the balls of your feet. Flatten your hands in front of you on the wall. Straighten your arms and lock your elbows, head facing forward. Raise your heels slowly until you balance on your big toes (seven counts), then lower in seven counts. Don’t pause, and keep moving until you can’t any longer.