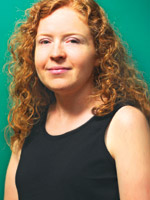 IN THE SUMMER OF 2001, MY LIFE WENT DARK.
Six months earlier, my feet started swelling and I began getting nosebleeds. But because of a recent promotion, I was working long hours and didn’t have time to go to a doctor. Besides, I was 25. What could possibly be wrong?

Plenty, as it turned out. Although I didn’t know it at the time, my blood pressure and sugar levels were spiking. I’ve had juvenile diabetes since the age of three and while I knew I needed to be more diligent about monitoring myself, life was busy.

Then the vision in my right eye became warped. The retina had detached, and my left eye was also showing signs of serious damage. I had eight operations – four in each eye – to repair my vision. But after a couple of months, I was legally blind.

I had to leave my job and go on disability. I considered suicide – even designed the perfect way to kill myself. But I realized that if thinking about it made me more sad than relieved, this was not what I really wanted to do.

My next challenge was deciding what to do with my life. I was sociable and liked to talk. I still had my voice, I figured. So I decided to use it to relate to people. When I started cracking jokes to help others feel more comfortable with my blindness, I realized making people laugh could be my way to inner healing.

I took a comedy course and have now done four stand-up shows. The routine is about my eyes: “I’m legally blind or – as I like to call it – really touchy-feely. I lost weight recently – finally went off that “see food” diet.” Laughing about blindness helps me, and my audience, put my disability in perspective.

AT 12, I WAS DIAGNOSED with Crohn’s disease, a chronic inflammatory disease of the digestive tract. My symptoms included diarrhea and bloody stool, weight loss, and swelling and redness in my eyes, mouth and legs. At 16, the doctors recommended a colostomy, which would leave me attached to an external bag to collect my waste. But a second opinion from a gastroenterologist, who recommended a diet free of wheat, red meat and milk, helped to settle my system. I went on to get my business degree and became a successful consultant at a major Toronto firm.

Almost three years later, while in Chicago on an assignment, I was rushed to hospital. I had developed a fistula (an abnormal connection between two organs) and my intestinal area was totally messed up. When I awoke from surgery, I had the dreaded colostomy.

I was single, 25, and had a bag hanging out – it was horrible. I was told it would be temporary and I tried to have it reversed three times, but a year passed before I was able to have the surgery.

During this traumatic time, I learned a lot about Crohn’s and wanted to share my knowledge with others. So I quit my job and wrote a book called Crohn’s Disease: Complementary and Western Therapies (East Meets West). I also decided to put my business experience into practice: I founded a company that develops foods for people with digestive difficulties. I called it Wellness Foods, and focused on manufacturing and distributing The Simply Bar, an easily absorbed snack for people with digestive problems.

It was hard. My $100,000 salary disappeared. The first bar I made tasted like chalk. There were days when I was up to my eyeballs in soy crisps, thinking, What have I done?

But once the bar was launched and people started emailing me, saying they were travelling comfortably – for the first time – because of it, I knew I was making a difference.

Helping others heal themselves has encouraged me in my journey. And it is a journey – there is always something more to learn about Crohn’s, and about how to manage it instead of letting it manage me.

WHEN I WAS BORN, my upper body was covered with bluish stains. Within days, those stains bloomed into blood-filled tumours hanging from my skin. The diagnosis was a rare syndrome known as Kasabach-Merritt. Although there are medical risks associated with this condition – low platelet counts and abnormal clotting, for example – the biggest issue for me as I was growing up was how it affected my self-esteem.

My largest tumour was on my neck and I’m told it looked like a balloon. During surgery to remove it, the nerve on the left side of my face was severed and that area was paralyzed. I got teased a lot – it was devastating. When the doctor said I should exercise my facial muscles, my mother put me in flute lessons. They didn’t work physically, but they had a powerful psychological effect. I discovered that, despite my situation, I was capable of learning, of contributing, of succeeding. I went on to play in the Calgary Stampede Showband.

The confidence I gained paved the way for me to pursue a career in social work. I now help kids with fetal alcohol spectrum disorder. Many have physical abnormalities, and all are challenged by being different. I know what that’s like.

Today, I am still learning how to use my appearance – without having it detract from my work – to help my young clients understand that anything is possible. A woman came up to me at a conference recently with tears in her eyes and said she wanted her daughter – who has Bell’s palsy – to have what I had achieved. I knew then I was on the right track.

I work at being confident every single day. I think that’s true for every woman.