The growing trend of 'silver divorces' and why they happen

Divorce rates for people over 50 are on the rise. Find out why so many later-in-life splits are happening and how to start over. 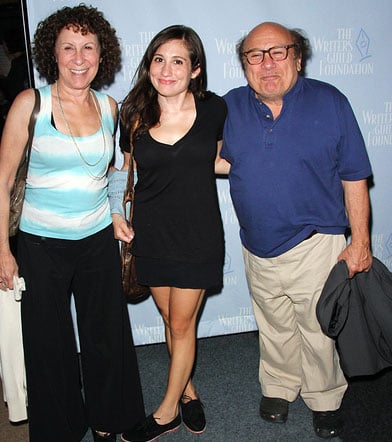 Rhea Perlman and Danny DeVito with their daughter (centre) at one of their last public events together in the summer of 2012 (Photo by Keystone Press).

When Erica Manfred was 55, her husband announced that he was leaving for a younger woman. The breakup that followed, and the transition to a new, single life, was agonizing. “It was very lonely,” she says. “Your dreams die harder if you have that fantasy of heading towards the sunset with your partner. When you lose it, you’ve lost a lot if you’ve spent decades working on it. Your whole life has been being married.”

Later-in-life divorce (also known as “silver” or “grey” divorce) has become a widely-documented recent phenomenon. According to Statistics Canada, the number of couples divorcing in their fifties and beyond has been on the rise for the last several decades. And there’s been plenty of highly-visible anecdotal evidence, too: Tipper and Al Gore, Susan Sarandon and Tim Robbins, Michael Douglas and Catherine Zeta Jones. But why, after decades of marriage, at a time when you might expect that a couple has finally accepted each other’s habits and foibles, when the socks on the floor and the empty milk carton in the fridge no longer seems so important, are these couples deciding to split up?

Deirdre Bair, author of Calling It Quits: Late-Life Divorce and Starting Over, attributes the recent divorce trend to two things. First, women now have more financial control over their lives and the independence that comes with a nurtured career path. “If they’re unhappy in the relationship, they feel they can leave it,” says Bair. And second, before you even get to the point of signing papers, couples are finding that they’re leading separate lives under one roof — and it’s not enough. “Their interests had developed separately, the things they wanted to do and the way they wanted to live,” says Bair. “It boils down to having nothing in common anymore.”

That’s not the only explanation proffered. For Manfred, whose husband hung around an additional year after his announcement, waiting for permission to skip off into the sunset with his mistress, “it’s a baby boom thing.” Manfred, who wrote a book about her experiences called He’s History, You’re Not: Surviving Divorce After 40, says that her generation is more restless and more inclined to believe they can have it all. “People are less likely to stick around and work on something that gets hard,” she says. “But I don’t think they realize what they’re giving up.”

Mandy Walker was approaching 50 when she realized she couldn’t go on like this; she had been married for 16 years and she was unhappy. No one in her family had ever divorced, and so she hadn’t seriously considered it an option. “But two moments told me that the dynamics of the relationship were not going to change,” she says. “And when it comes to divorce, it’s often one catalytic moment, after being unhappy for years or decades, that brings things into great clarity.”

There’s no consensus on whether divorcing later is harder or easier than divorcing earlier in life — though the people I spoke to pretty much agree that it’s awful at any stage. Manfred however, believes that divorcing later in life can be much tougher: “Starting over later in life is very difficult because you’re not as resilient. It’s much harder to start a career and find a new mate.” But Bair, on the other hand, says it can be easier once children have moved out and on with their lives, once both parties have cultivated their own friends and interests. “Women, in particular, have often identified the things they want the freedom to pursue,” she says.

Walker agrees: “I think the whole marriage contract has changed and shifted from an economic agreement,” she says. Now that women can support themselves, they’re questioning how much value they’re actually getting from a partnership and if it’s worth whatever they’re giving up. A lot of women are looking into a future of silent dinners and deciding that it’s not enough. “Divorce is an opportunistic thing,” says Walker. “There’s always at least one person who believes divorce will make their life much better. A lot of people are feeling, like me, that they don’t want to live the rest of their lives like this.”

According to a recent study from London’s Kingston University, women actually do tend to experience a boost in happiness once a divorce is finalized — a much more marked increase than the minor increase in happiness felt by men. Bair has found that women who divorce late in life are often very content to be on their own, while men more determinedly seek out new partners. “A lot of men need someone to wash their socks and put dinner on the table, and they just really want to be with someone,” says Bair. “With women, the classic story they tell me is that they love pouring a glass of wine and having an apple and some cheese and having dinner in front of the television.”

Trend forecaster Marian Salzman named over-50 divorces as one of the key trends to watch for love and relationships in 2013. “In the U.S., the divorce rate of those over 50 is double what it was 20 years ago,” she says. And online dating sites are seeing a huge rise in users in the 50-plus age category (for both men and women).

Walker’s divorce became final in 2007, and she says that her life has changed completely since deciding that her marriage wasn’t a good fit. She went back to school for journalism after taking severance from the corporate job that was driving her crazy. She now blogs at sincemydivorce.com and is setting up an online divorce coaching program. “I love my life,” she says. “I’m happier than I ever thought, but it’s not the happiness you get from a vacation and a big fancy home. It’s more that I’m content and like who I am.”

Tips are hard to parcel out with something as difficult and diverse as divorce proceedings, but here’s some advice from the women who have been there:

Don’t rush into making any decisions, say both Walker and Manfred. Walker advises waiting for that catalytic moment that will make your path clear to you, and Manfred counsels other women to simply wait until they’re pretty sure they won’t regret whatever path they choose to take.

Bair also says that women tend to fall into two camps, but that both often end up satisfied: One joins groups to meet people, especially men, for interesting conversation. The other becomes so content just dealing with friends and family, without seeking a relationship, that she’ll probably never want another one.

Have you gone through a divorce later in life? Tell us your story in the comment section below.