Men experience the pain of childbirth — sort of

A recent experiment set out to let men know what it really feels like to go through childbirth -- the results are quite comical. 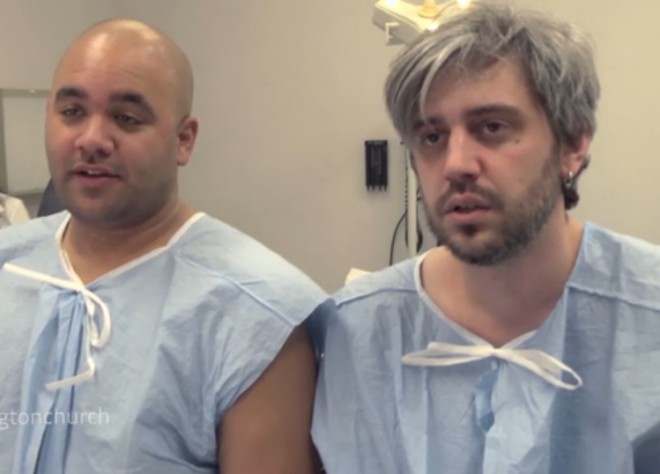 In honour of Mother’s Day these two men simulated labour pains for a full hour (Photo courtesy of Vimeo).

Puberty, menstruation, losing one’s virginity, pregnancy, giving birth — these are some of the flaming-hot tent poles that support the banner of womanhood.

There’s no escaping bearing the burden of at least one of them. The gal who doesn’t experience the horrors of pregnancy, which can include the sorrow of miscarriage as well as the agony of childbirth, will no doubt still know the delights of monthly menstruation and will never forget the particular sensation that came with her first sexual experience. (YOW! should just about cover it.)

Physical pain and femininity are tethered to one another, clearly. Maybe that union accounts for why we’re so interested in beauty products and artfully arranged entrees and appetizers — as a means of escaping from the harsh realities of our more pressing, primitive not-so-pretty concerns (e.g. is my tampon leaking?)

And maybe it’s their seemingly carefree adolescence and — from all external appearances, anyway– relatively painless transition into manhood that accounts for most men’s ungodly fascination with pain and suffering whether in the form of violent sports and movies or video games.

Who knows, maybe if men suffered menstrual cramps they, too, might suddenly appreciate the joys of Goop.com or online shopping. One can only hope.

Imagine the cultural shift if men understood how it feels to deliver a child. Of course, it’s impossible. But two American men recently attempted to simulate the contractions that come with delivering a new life into the world, and yes, they chose to record it on video. The occasion: Mother’s Day.

In the video, which you can thanks to The Telegraph, the men are strapped to what appears to be contraction monitors and are then subjected to a series of shocks that simulate what a contraction feels like.

The men aren’t taking the experiment too seriously and who can blame them. It’s a goofy simulation and to take it seriously would be downright odd. At one point, their wives join them —  not to support their partners so much as gloat. The women giggle and trade high-fives when they observe their husbands’ mutual distress after a particularly potent zap.

It’s a cute video — but not as cute as say this one (I mean, c’mon!). And yet, oddly, it only reveals how impossible it is for the sexes to fully experience each other’s physical reality.

I’m not complaining, only confessing that the tent poles do get a bit heavy to carry every once in a while. And in such times, a supportive shoulder is definitely appreciated. But that’s just my gender-bound blinkered perspective. For all I know my head weighs a lot, too, and my partner may be secretly concealing a nagging shoulder injury.

Tell us in the comment section below: Do you think men have it easier than women?