How 'slow sex' can improve your relationship 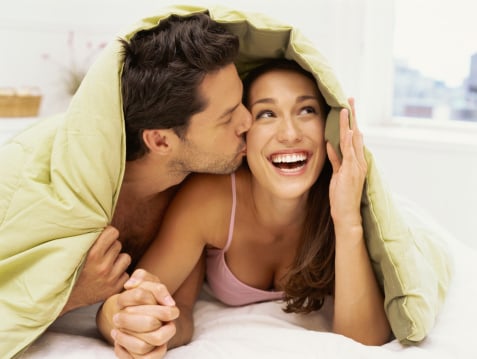 For many women, an orgasm isn’t just elusive; it’s a myth. Like the Loch Ness monster and Bigfoot, its existence has been verified only by anecdotal evidence and grainy video footage.

But whether they’ve experienced the big O or only heard whispered tales of its existence, a lot of women still bow to pressure to perform their arousal, a situation that can make lovemaking feel like an extended audition for an amateur production of When Harry Met Sally.

Nicole Daedone, author of Slow Sex: the Art and Craft of the Female Orgasm, wants that to change. To do so, she’s founded a centre of study devoted to the female orgasm — the One Taste Urban Retreat Center in San Francisco, where students practice yoga, meditation and a technique called “orgasmic meditation,” or OM.

1. Stop conjuring your inner Meg Ryan
Oh, Oh, Oh — oh, c’mon give it a rest. There is no Academy Award handed out for most convincing orgasm, so why are so many women acting as if there is one? The short answer: because they’re trying to satisfy their partners who have been conditioned to believe that pleasure can be gauged in decibels.

The problem with performing sexual arousal, however, is that it doesn’t translate into actual arousal.

“You can’t fake it and feel it at the same time,” says Daedone.

Rather than feed your partner’s ego, educate him on how you — not some fictional character in a half-baked rom-com — react to sensation. Sex should be a way people know one another better. But if we’re pretending to be someone else — someone who can reach the high notes a cappella style — we’ve lost that unique opportunity to be ourselves.

2. Reclaim the orgasm
Now that you’ve dropped the act, determine what an orgasm is to you personally and how you behave in the sweet state of yowzerville. (For the record there are some ‘official’ physiological definitions, including vaginal contractions and swelling.)

Aware of how the culture has invested the experience with all kinds of ideas and sounds (see ‘Meg Ryan’ above), Daedone struggled to define the term herself. Finally she settled on a “simple,” “feminine” definition: “the ability to give and receive enjoyment.”

3. Don’t disparage your partner’s skill
Don’t blame your partner for your lack of sexual satisfaction, and for one good reason: they’re probably working a lot harder than you know. Unfortunately female genitalia are the Rubik’s cube of private parts — so hard to solve that it’s tempting to give up or cheat. “Men are up against a lot when it comes to the female anatomy,” jokes Daedone.

4. But don’t blame yourself either
The most frequent thing Daedone hears from women: I’m not orgasmic. Not so, says Daedone. “And then we put her in the practice and lo and behold, all of the signifiers that we know orgasm to be: the contractions, ejaculate and swelling begin to appear. It just isn’t her being what she’s been told it’s supposed to be from a masculine perspective.”

5. Assume the ‘OM’ position
Orgasmic meditation is a “practice” says Daedone, and one that induces a state of blissful relaxation, just as yoga is a practice that offers similar results. And like yoga, slow sex doesn’t have a goal in mind. In fact, it’s goalless. “You aren’t doing it to show that you love each other. You aren’t doing it to have a baby. You’re not doing it for any of these reasons,” says Daedone. The point is simply “to connect with your partner.”

Here’s how OM’ing works: lie back, resting your knees on two pillows on either side of you. Your partner sits to the left of you and strokes your privatest parts (hey, no giggling!) for fifteen minutes. (Use a timer. And for more detailed instructions visit here.)

If you’re feeling shy about trying it, here’s some nudge-nudge incentive: It feels good.

“I had a woman describe it as “her burden was light and her yoke was loose. That is the feeling,” explains Daedone. “It’s almost like the first day of spring where you’re walking and everything has a level of effortlessness where there once was effort. For me, the experience has buoyancy almost as if I’ve washed through my body and in washing through all of these thoughts I can see the world new. Everything is vivid again.”