Six proven ways to get through to your man 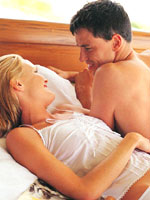 “We need to talk,” you say. He makes a dash for the refrigerator or reaches for the remote control. Yep. Pinning down your guy for a heart-to-heart can be hard work. And having him truly understand and respond to what you say? Some days, it would be easier to split the atom in your basement. Blame outdated social conventions: boys grow up learning that it’s not OK to cry or yak about feelings. “There’s a very strong unspoken code about what guys are and are not to say,” says Karyn Gordon, a Toronto-based relationship coach.

But the good news is, you can help him open up. Good communication isn’t about changing your man or learning fancy discussion techniques – if he isn’t speaking your language, just try talking his. Here are six proven ways to do it, courtesy of Gordon and four happily partnered women who’ve managed to crack the guy code.

While women’s minds tend to float into the abstract, men prefer the concrete. “I want to be loved!” and “I want to be appreciated!” are two phrases Gordon hears women say to their partners all the time, she says – and “Huh?” is the usual reply. “Most guys are very literal,” she explains. “Only when women are very clear and break the concept down into a specific behaviour, will they be able to follow it.”

Real women testify: Denise, who’s been married for 12 years, was tired of not getting any help from her husband around the house. She was constantly asking him to “support” her, but it wasn’t until she got specific about the tasks she needed help with – and why – that he shaped up. For example, instead of vague requests to pull his weight, Denise specifically said she needed the garage cleaned out so she could park her car there when she got home from work. The result? He worked on the task for eight hours straight.

Guys have a limited amount of patience for details, so avoid drawn-out tales if you want to keep their attention. And when you want him to feel sorry for you after your boss chews you out at work, tell him clearly you just want a sympathetic ear and reassurance, not 10 suggestions for solving the problem.

Real women testify: Lesley Provost, who’s been married for five years, recalls being upset at her partner for having an extended chat with an ex-girlfriend at a party. He had no idea why she was upset, so instead of recounting the events of the evening, Lesley laid it out plainly: “When you talked to your old girlfriend, it made me feel as if she was allowed to push your buttons,” she said. She told him it hurt her and she didn’t want him to do it again. “Just skip the details and slowly and clearly enunciate the emotional impact of whatever the issue is,” Lesley says.

It would be so, so nice if men just knew how we were feeling. But they often don’t, for one simple reason: we don’t tell them. “Women have this idea that if we tell them exactly what we mean, it loses the romance,” says Gordon. Also, men often don’t heed body language, so sulking, stomping up the stairs or pouting at the dinner table might go unnoticed. If there’s a problem, just say it.

Real women testify: Newlywed Nisreen Furniturewala recalls crying her eyes out and answering “No” to the question “Is anything wrong?”. Her husband shrugged and walked away. But she learned something that night. “A man will never understand you; you have to spell it out for him.”

Most women are quite capable of doing two things at once while thinking about 10 others. Guys tend to focus on one thing at a time, so that’s why they so often say “I don’t know” when multiple topics get tossed their way out of the blue, says Gordon. Stick to one issue at a time – and give him time to shift gears and think about it before pressing him for answers.

Real women testify: Lesley recalls imagining a new life in a new town when she had just sent in an application for a faraway school. She was chatting a mile a minute about the town, where they might live and what their life would be like, and her husband just couldn’t follow along. “I don’t think boys think about cause and effect the same way we do,” says Lesley. She finds she thinks about preventing problems or predicting what will happen in the future. “He only thinks about how to fix things in the present.” While she was already thinking about where they’d move to and what their life would be like, he just wanted to know if her letter of reference had been mailed in.

5. Choose the right time and place

Launching into a huge discussion about your future together at a dinner party or late at night probably won’t yield the results you’re looking for. Gordon recommends talking about any important subjects over dinner. Many men find direct eye contact unsettling, so she also suggests trying to broach tough subjects while you’re in the car together.

Real women testify: Paula Myers Bitter, who’s been married for four years, has learned never to try serious conversation on public transit, during dull moments in soccer games or when her husband first comes in the door. She now reserves serious discussion for quiet days or evenings home. With no distractions, their conversations go more smoothly and are much less likely to result in a fight.

“‘How do you feel about that?’ is a way too open-ended question,” says Gordon. “He’ll just say: ‘I don’t know.'” Instead, ask him if the situation made him feel angry, sad or neglected, and it’ll help you both get closer to understanding what went on.

Real women testify: Lesley used to assume if she kept asking her husband how something made him feel, he’d eventually break down and tell her. Then she finally realized he often just didn’t know. Now she says: “Did that make you mad?” and runs through a list of emotions until he says “Yes.”

You’ll be surprised how quickly a guy responds when you speak his language. And if you’re really desperate, remember the basics. “It’s easier to persuade husbands to agree with you when you’re naked or when you might become naked,” quips Lesley. “But you already knew that.”