More COVID Vaccines Are Coming To Canada. Who Will Get Them First?

Seniors who don't live in long-term care have largely gone unvaccinated in Canada, thanks to disruptions in vaccine shipments. Where are they in the queue now? 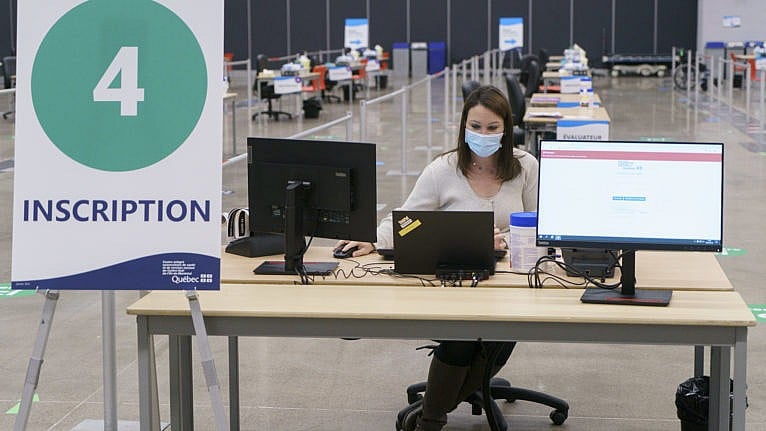 A health care worker works at setting up a registration booth at a vaccination clinic in Montreal, on Monday, February 1, 2021. (Photo: The Canadian Press / Paul Chiasson)

The one constant in this pandemic is that nothing stays the same. And that applies to the COVID-19 vaccination programs in Canada, including how groups are being prioritized for upcoming vaccine deliveries. To put it bluntly: Too many people want to be next in line.

On Feb. 15, the National Advisory Committee on Immunization (NACI) made major updates to its guidance for vaccine priorities, noting that the “evidence on COVID-19 and COVID-19 vaccines is rapidly evolving.” In particular, the expert panel, which offers advice on all immunization topics, has significantly changed the list of those it recommends be vaccinated in the near future.

Back in December, when it issued its first detailed guidance, NACI’s Stage 1 category included residents and staff in congregate living settings for seniors, adults aged 70 and older, health care workers and Indigenous adults in at-risk communities. That left remaining health care workers, residents and staff in other congregate settings (homeless shelters, for example) and essential workers in its Stage 2 category.

But that guidance came before Canada suffered large disruptions in its vaccine shipments, which caused provinces to make hard choices as to who would get those first precious doses, focusing much of their efforts on long-term-care (LTC) residents and staff as well as front-line health care workers and high-risk Indigenous communities. Left in the cold: seniors 70 and older who don’t live in long-term care homes.

Now, with many in the highest risk populations in the process of being vaccinated, NACI is focusing on the next stages of the “equitable, ethical, and efficient allocation of authorized COVID-19 vaccines in the context of staggered arrival of vaccine supply.” As Dr. Howard Njoo, Canada’s deputy chief public health officer, explained on Feb. 18, “The rationale for this guidance is clear: protecting large groups of individuals who are at a higher risk will help all people in Canada by reducing hospitalizations and death.”

In its recent changes, NACI left its Stage 1 category untouched, aside from explicitly stating that health care workers meant those on the frontlines. But it has completely reworked that Stage 2 category, using new evidence regarding the effect of COVID-19 on specific populations within Canada, and has listed key adult populations in order of priority:

The biggest change is the specific inclusion of racialized and marginalized communities in Stage 2. That’s because of a growing body of evidence that shows how those communities have been disproportionately affected when it comes to the rate of infection, hospitalization and death. NACI points out that “neighbourhoods with the highest proportion of visible minorities (of at least 25 per cent) had a mortality rate twice as high as those with the lowest proportion of visible minorities.” In Ottawa, the Black community “makes up seven per cent of the general population, but accounts for 37 per cent of COVID-19 cases.”

Provinces are encouraged to align their own vaccination plans to those developed by NACI, but they are free to do what they like. Every province has its own terminology and each slots different groups in different stages (or phases) of its rollout, providing different timelines for each stage.

The differences between provinces can be seen most clearly when comparing how seniors living outside LTC settings are categorized. From the start, NACI has recommended that all seniors 70 and older be vaccinated in Stage 1 because of their high risk of hospitalization and deaths. Yet, many provinces have pushed those age cohorts down their lists, below the highest-risk category. For instance, Prince Edward Island’s vaccination plan has adults 80 and older in its current Phase 1, but those 70 and older are in Phase 2, due to start receiving vaccinations in April. British Columbia, which is in its Phase 1, has adults 80 and older in Phase 2, while those 70 and older are in Phase 3, due to begin in April and May. On Feb. 16, Dr. Deena Hinshaw, Alberta’s chief medical officer of health, said that the province was about to initiate Phase 1B, which includes all seniors 75 and older as well as all Indigenous adults 65 and older, in “coming weeks.” (Hinshaw also said that no final decisions had been made as to who would be in Phase 2, due to start in April.) Only a few provinces have seniors 60 and older in their second phase of vaccinations as NACI recommends.

As well, provinces are shuffling their priorities. In its Jan. 13 vaccine plan, Ontario had placed adults 65 years and older in its mass delivery Phase 2, officially due to start in April, along with teachers, construction workers and other essential workers. In recent weeks, more evidence has emerged that seniors are at highest risk for hospitalization and death due to COVID-19. Last week, the Registered Nurses Association of Ontario told the government that it was “extremely concerned” about what it described as the relatively low prioritization of seniors in the community, saying “this must be corrected urgently.”

On Feb. 14, Ontario updated its vaccine guidance and shifted seniors 80s years and older into Phase 1, putting them next in line for vaccines after LTC and other retirement homes. Now, they will be “vaccinated in parallel” with Indigenous adults, adult recipients of chronic home care, and “high priority” health care workers. Seniors younger than 80 remain in Phase 2.

On Feb. 9, Ontario ranked four categories for health care workers, with the lowest being “moderate priority” (those who work remotely or don’t need PPE). In the new Feb. 14 guidance, the “moderate priority” category is no longer in Phase 1; their new spot in the plan hasn’t been announced.

More vaccines are coming. In recent days, Prime Minister Justin Trudeau and other federal officials revealed more details regarding the Pfizer and Moderna vaccine deliveries expected in the spring and summer. In addition to the six million doses expected by the end of March, another 23 million doses of the vaccines are expected in the second quarter, from April to the end of June. By the end of September, the cumulative total will be 84 million doses, and that doesn’t include deliveries from other pharmaceutical firms whose vaccines may be approved in the coming months.

Those larger shipments of doses should allow for more opportunity to vaccinate more priority groups faster. Right on the heels of those in NACI’s Stage 2 is another huge group in Stage 3, including, in order, all adults with underlying medical conditions that put them at high risk of severe COVID-19 as well as their primary caregivers; adults in their 50s; and then non-frontline health care and essential workers.