Jessamyn Stanley talks to Chatelaine about making room for all body types in a spiritual practice that has nothing to do with money, mats and leggings. 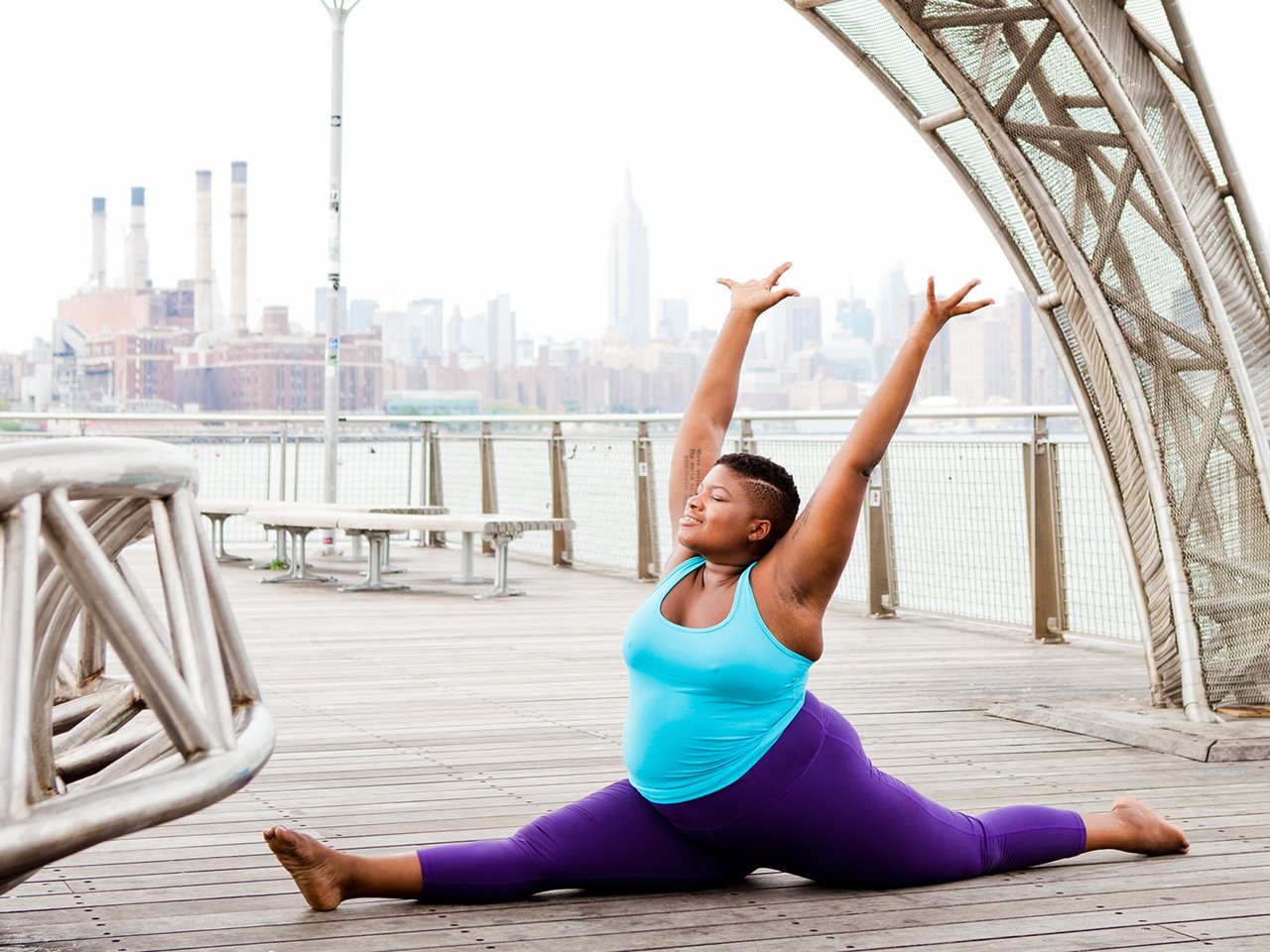 Jessamyn Stanley couldn’t care less what you think of her body. “I don’t respect people who have time to sit on the Internet, talking sh-t,” she says. It’s this confident, no-nonsense, self-respecting attitude that has made so many people fall in love with Stanley, now 29, since she started posting photos of herself on Instagram in 2012. The celebrated yoga instructor from Durham, N.C., is challenging what we see in fitness magazines and clothing ads, which would have us believe that yoga is the domain of young, slender, well-heeled, white women. But step into the average class and it’s clear people from every corner of society, age group, body type and fitness level are practising yoga.

Her new book, Every Body Yoga, Stanley breaks down common beginners’ fears, including questions like, “What if I’m the fattest person in the class?” and “I’m in a wheelchair. Where do I start?” Chatelaine talked to Stanley about the “yoga industrial complex” and how she works to stay true to her practice.

Related: Why 2017 will be the year I stop trash-talking my body

When did you start practising yoga?

“I started six years ago. I tried once in high school, but it was a really unpleasant experience and I never wanted to go back. It wasn’t until graduate school, when one of my classmates insisted I’d love it, that I gave it another chance. I was going through a period of depression and I needed a space to understand myself. It didn’t start as an exercise program for me. It was just, ‘I have to keep doing this, because I feel like sh-t if I don’t.’ It was like medicine.”

I think a lot of people start going to yoga for its physical benefits, not so much the self-actualization benefits.

“Most people get into yoga as an exercise program because fitness culture was how yoga was introduced to the West. People have difficulty seeing beyond the physical; many people are afraid of spirituality as a concept. It’s interesting because I feel like there’s no other thing that will happen if you are really practising. Even if you don’t understand it, [the spiritual aspect is] always happening. That’s why people become so addicted to yoga and that’s why it’s so different from other kinds physical activity.

When people say, ‘I have yoga classes that are just about the physical stuff, not about the spiritual stuff,’ I’m just like, ‘What are you even talking about? That’s like an oxymoron.’ ” 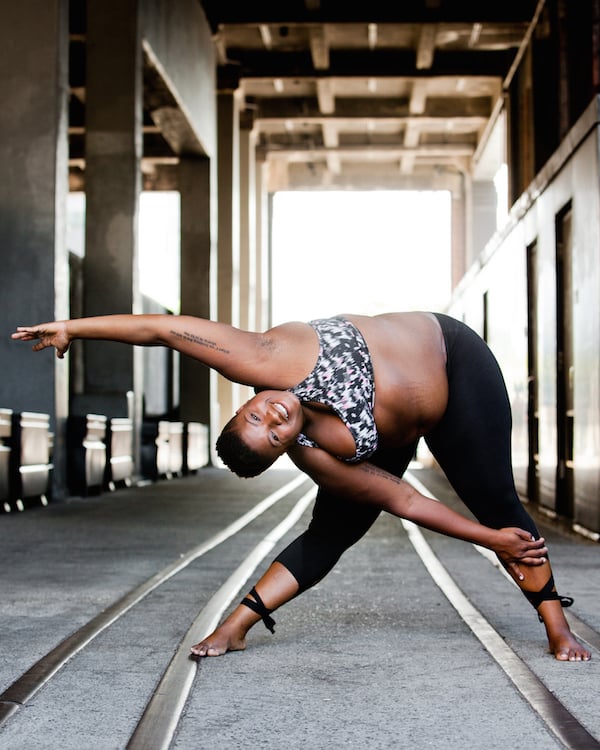 It’s ironic that a practice that’s meant to be freeing can lead to such self-conscious feelings. Sometimes a yoga class can feel like breeding grounds for comparing ourselves with others.

“That competitive energy is the attitude we carry in our work lives, and even in our personal lives, things we learn from when we’re young. You feel like you need to have the exact same clothes, the right kind of mat, and all your things need to be in some kind of formation. What is this, Mean Girls? That has nothing to do with yoga.

One of the reasons that I’m able to see that is because through elementary, middle and high school, those were the people making fun of me. I wish there was a way to inject everyone with a ‘who cares’ attitude because that’s the only attitude to rock with.”

Related: ‘I don’t own a scale.’ Misty Copeland on getting a Ballerina Body

Why did you decide to post on social media?

“When I first started practising yoga at home, I was looking up different poses on Instagram and Tumblr.  At the time, in 2012, yoga on Instagram was not that popular. It was all very serious practitioners and teachers who would post photos of their practices so that they could get feedback from one another. I was embarrassed to post my pictures, because I was like, I don’t know what I’m doing, I’m just learning. But then the feedback I got was so awesome, so I just kept posting.

I realized over time, the response was less feedback, and more people being like, “Wow, I didn’t know fat people could do yoga!” There really were not that many people showing their bodies and definitely not showing advanced asanas. So that was a bit of added motivation.

I also owe it to Valerie Sagun. I first came across her on Tumblr back in the day, and had I not seen her, I would not have posted photos of my practice. I remember the exact picture. She had been hiking, and she was on a cliff doing a mermaid pose and had long, dark hair that was flowing in the wind. I saw that and I was just like, ‘Who is this Chicana b-tch doing yoga on a cliff and why are we not friends?!’

But I also have mixed feelings about social media mixing with yoga because it can really trivialize the practice. I try to only post if I have something on my mind or on my spirit.” 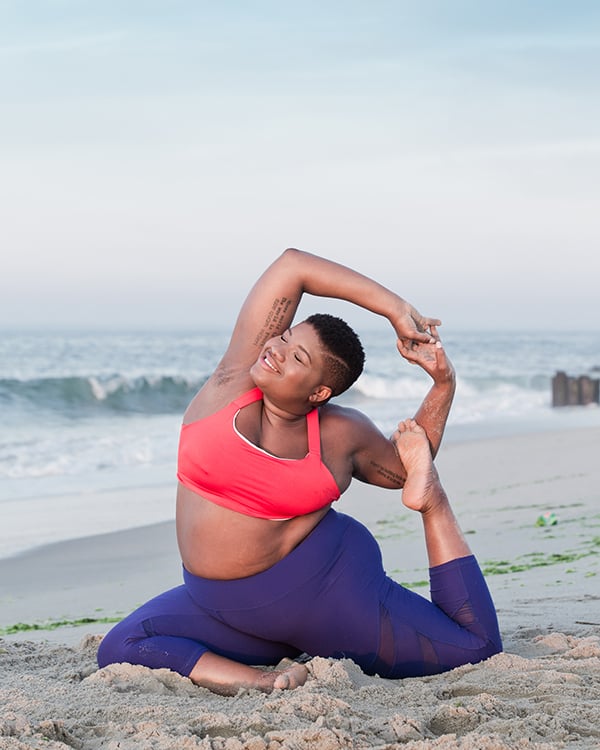 What challenges have you faced since you started practising and teaching?

I’ve had students who don’t know about me from the internet come into my class and say, ‘Are you teaching the class?’ They’re usually the person after class who is like, ‘Oh my God, that was such a great experience,’ or halfway through they can’t catch their breath. Everybody is going to come to the conclusion that they need to come to, that’s why it doesn’t really get to me.”

So, no real challenges then?

“I think my biggest challenge is just trying to keep my head in my practice and not succumb to the mechanisms of the yoga-industrial complex. That’s what I call it: this machine that is bloodlust-y for money, leggings, mats and all that. I try not to fall prey to that and stay in my practice at all times.

Aside from my really close friends, I’m reclusive. I travel constantly and I could meet new people all the time, but it’s enough for me to just go to class, have a beautiful interaction with the people I’m teaching, and then go home, and go to sleep and that’s it. All I want to do is live indoors, eat the food I want to eat, practise my yoga and hang out with my family and my cat and that is it. Keeping my head up through all of that is my biggest challenge.”

More:
Lost savings, downsizing and debt: The hidden costs of critical illness
20 million people are on the brink of starvation. Here’s how you can help
Subscribe to our newsletters