Yes, You Can Turn Down A Pelvic Exam 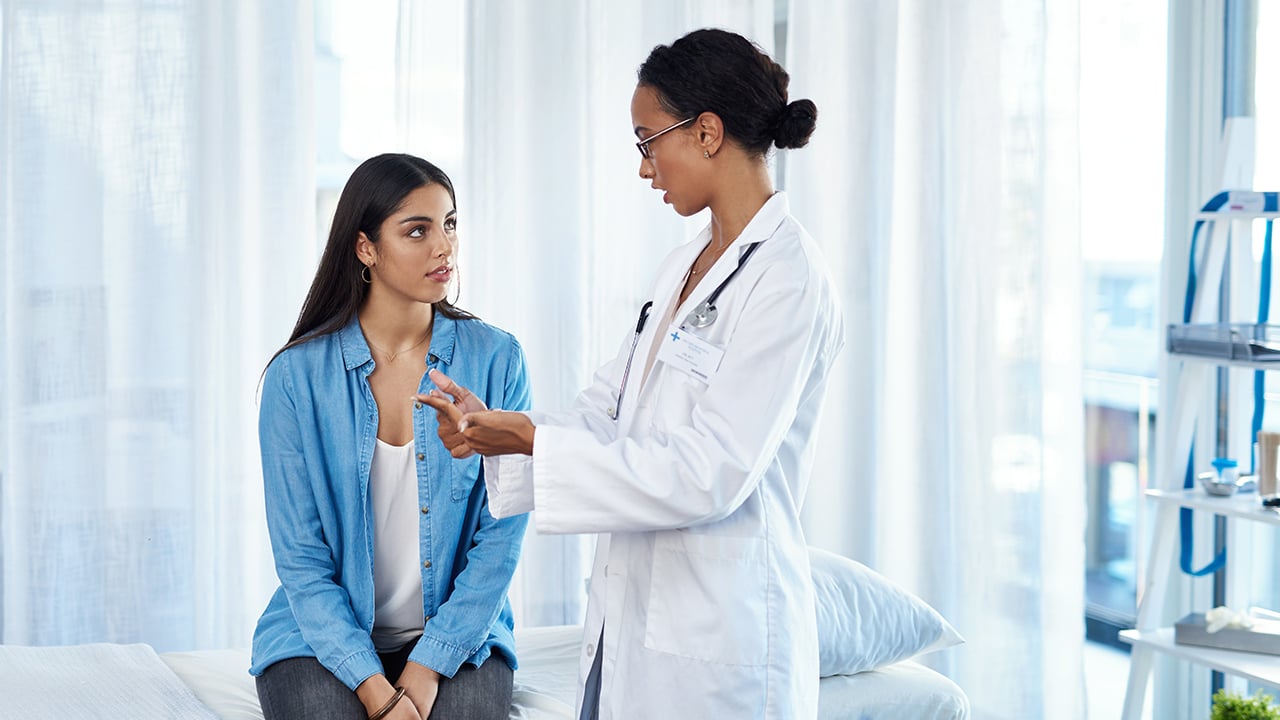 Six weeks after I gave birth to my first daughter, I walked into my midwife’s office, happy with the care that I received in the nine months I had been a patient there. That said, my daughter’s arrival had been traumatic and I was still grieving the birth experience that I had been yearning for. The midwife on duty that day strode into the room briskly and announced that she would be performing a vaginal exam. I hadn’t been informed that there would be one at that appointment, and she phrased this pronouncement as a requirement I was obligated to comply with rather than a request that I could choose to deny. Surprised, intimidated, and just wanting to get out of that room as quickly as possible, I endured the invasive exam. It wasn’t until I got in the car and drove away that I realized how disappointed I was that my midwife had ignored the basic tenets of informed consent, especially in the aftermath of a birth that had left me feeling confused and upset.

Informed consent, the permission that a patient gives a healthcare provider to conduct medical treatment only after they’ve received adequate information about why and how a procedure will be performed, should give patients agency over their care and their bodies. However, when care providers skip this step, especially during pelvic and vaginal exams, they can leave patients feeling violated and traumatized. Here’s everything you need to know about what informed consent means in gynecological care—and how you can exercise your rights in a medical setting.

Informed consent is mandatory and ongoing

The Canadian Medical Association Code of Ethics stipulates that physicians must “provide your patients with the information they need to make informed decisions about their medical care, and answer their questions to the best of your ability.” Nurses and midwives operate under similar guidelines. The British Columbia College of Nurses and Midwives, for instance, asserts that “the ethical obligations of nurses to recognize, respect and promote the client’s right to be informed and make informed choices, including to refuse or revoke permission.”

Dr. Doug Wilson, a representative from The Society of Obstetricians and Gynaecologists (SOGC), pointed me to this editorial written by SOGC chief executive officer, Dr. Jennifer Blake, which outlines the importance of consent in the care of pregnant people. Wilson adds that the SOGC hasn’t published any guidelines on informed consent in the realm of gynecology in several years. However, he did emphasize that patients can expect the majority of physicians in Canada to go over the risks, benefits and alternatives to any treatment before verbally obtaining consent, in addition to requiring that all patients sign a consent form for surgical procedures like a cesarean.

In addition to being something a health care provider obtains before a procedure, informed consent should be ongoing. For instance, if a labouring person consents to one cervical check, that doesn’t mean that an hour later their care provider can conduct another check without first asking. Signing a waiver during any medical appointment, not just in the gynecological care, is not ongoing consent; neither is being admitted to a hospital in general.

You can also stop an examination you no longer want to continue, such as a Pap smear or STI screening. Tell your care provider to stop or slow down; request a five-minute break; or reschedule the exam for another day.

If a patient feels coerced into agreeing to a procedure, it’s not true consent. This is especially relevant for people of marginalized identities, says Laura Hochban, who runs a doula practice called Womb of One’s Own in Ottawa. An important part of her job involves advocating for people in most stages of reproductive care, including abortion, pregnancy and labour. “Duress, manipulation, threats, including threats involving the courts or child protective services,” she says, “[can be used] to motivate people toward a specific clinical decision.”

What informed consent looks like during a gynecological appointment

“Gynecologists recognize that the pelvic exam can be a source of fear, anxiety, embarrassment and discomfort for many patients,” says Dr. Stephen Kaye, co-president of the Society of Obstetricians and Gynecologists of British Columbia.

According to Kaye, a conscientious care provider will put their patients at ease by explaining “what the examination or procedure entails, why they feel an examination is required, what information might be obtained [by the exam], and what the patient might expect.” If a patient feels uncomfortable, Kaye says that they should be “offered the option of having a chaperone in the room during the examination.” However, he emphasizes that “a patient has every right to decline to undergo a physical or pelvic examination, just as patients do for any medical examination or procedure, and in that case the patient’s wishes are to be respected.”

In her former obstetrics practice, Dr. Brenda Wagner, who is now co-president of the Society of Obstetricians and Gynaecologists of BC and a clinical associate professor at UBC’s Department of Obstetrics and Gynaecology, used shared decision-making. For instance, if a patient expressed interest in an IUD, she explained the insertion process and the risks and benefits of the procedure, before the patient could consent. Ideally, Wagner tells me, this is the way that all physicians in Canada should operate, but that she is not sure that is always the case. Wagner recommends that you ask your referring physician to recommend specialists that they know incorporate shared decision-making into their practice.

She also practiced a concept she calls double consent: “If we need to do a pelvic exam, I explain why this would be helpful to making a diagnosis and then before I touch the vulva, I ask again, ‘Is it okay for me to touch’ [and] I try to remind them that they can withdraw consent at any time.”

If you do decline the procedure, Kaye notes that your doctor may also inform you of the potential ramifications: that it might not be possible for them to make a diagnosis, which could have negative health implications.

Why informed consent is sometimes difficult to uphold in medical settings

The power dynamic in a medical setting can prevent some patients from speaking up when they feel uncomfortable, particularly if that dynamic includes race or socioeconomic class. Patients can be made to feel guilty or that they are disappointing their provider if they decline an exam or question its necessity. Trans, queer and nonbinary people—particularly if they are people of colour—carry an even heavier burden. Often patients comply in order to not seem difficult or aggressive.

In a study published in the journal Reproductive Health in 2021 that included 1,540 written accounts from more than 1,000 women in British Columbia, researchers found that “almost one in three respondents said their care providers reacted with disrespect, tried to coerce them or disregarded their wishes,” when they declined “some kind of care or procedure.”

Dr. Kathrin Stoll, a reproductive health researcher at the University of British Columbia, and the lead author of the study, found that while standards are changing to emphasize the importance of power dynamics between health care providers (HCPs) and patients, they sometimes still fall short.

“Clients need to be given enough time to arrive at an informed decision, and this is very difficult when HCPs pressure clients to make decisions quickly,” Stoll says. “There is significant anecdotal and some empirical research that suggests that HCPs might skip full informed consent discussions, present partial information or use threatening language [or] veiled threats, to make it more likely that [patients] comply with their preferred course of action.”

What to do if your provider doesn’t obtain informed consent

So what should you do if you’ve had an experience like I did at my midwife’s office?

In my case, I never lodged a complaint or even broached my discomfort with the midwife; I didn’t want to come across as argumentative or sour a relationship that had been pleasant up until that point.

However, I did reclaim a little bit of agency when I returned to renew my birth control prescription: When the nurse pulled a paper gown out of a cabinet and announced I would (yet again) be receiving a pelvic exam, I raised my hand to stop her. I told her, firmly, though nervously, that I was not interested in a pelvic exam at that appointment. The nurse looked confused and hesitated to put the gown back in its place—but I stood firm. When the midwife entered the exam room a few moments later, she confirmed that I had declined the pelvic exam and continued the appointment without incident, but I never did confront her about the worrying lack of informed consent procedures in her office—once again, my self-consciousness about standing up to a medical professional got the better of me, and I stayed quiet.

Ideally, says Wagner, you should speak directly with your provider as soon as possible after the incident. If you’re not comfortable doing so, she recommends seeking out the patient care complaint office if the hospital where you were treated offers one.

If you do feel comfortable speaking directly to your doctor about a violation of consent, Wagner recommends trying to keep the conversation non-confrontational, stating first that you were uncomfortable, then asking questions like, “Why was that procedure necessary?” “Is that your usual practice?” and “Can you explain more about why that happened?”

An easy way to initiate the consent conversation

Even if you are feeling intimidated or insecure about ensuring that your care provider asks for informed consent, there are simple steps you can take to ensure they do. The best tool to take into an exam room is BRAIN—an acronym to remind patients to ask about the benefits, risks and alternatives to a procedure; to use your intuition about what feels comfortable and safe for you; and to ask the consequences of doing nothing, instead of moving forward with the provider’s recommendation. From there, the choice is yours.