How losing sleep can make you gain weight

A recent study that appeared in the American Journal of Clinical Nutrition showed that loss of sleep can lead to weight gain, partially due to a slowed metabolism. 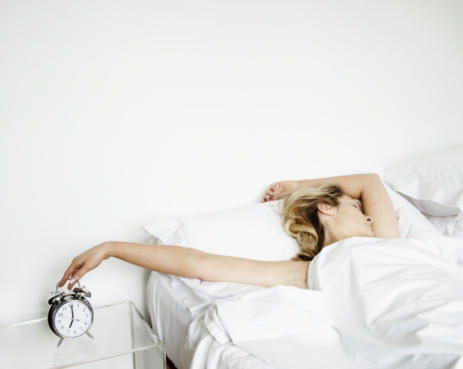 A recent study that appeared in the American Journal of Clinical Nutrition showed that loss of sleep can lead to weight gain, partially due to a slowed metabolism.

The really interesting part of the article is this one: “The team found that even a single night of missed sleep slowed the volunteers’ metabolisms the next morning, reducing their bodies’ energy expenditure for tasks like breathing and digestion by five to 20 percent, compared with the morning after a good night’s sleep.”

It used to be thought that missing out on sleep caused fewer calories to be burned simply because people were tired the next day and didn’t want to move around as much, but according to this admittedly small study, it’s decreasing the caloric burn of breathing and digestion. That’s not “just because I’m tired;” that’s a core metabolic decrease due to decreased sleep.

It’s interesting, and reinforces the importance of getting a good night’s sleep, but more on that in a moment. I think the real issue with not being properly rested and its effect on weight is the voluntary effect it has, rather than involuntary such as a somewhat-decreased metabolism. I mentioned that if you’re tired, you don’t want to move around much, and this can include things like skipping workouts. If you slept well and are bursting with energy, jobs get done, weights get lifting, paths get run on, and bicycles get ridden. Not so if you’re exhausted.

Even more important is the effect on ingestive behavior, meaning what you eat. Focusing on healthy eating requires using your brain and your will to make the right choices. If you’re tired, you’re more likely to make bad, calorically dense food choices.

And here is an interesting thing about sleep that might help lower your stress: it’s okay for it to be broken up. It turns out that broken sleep is the norm, but we’ve somehow got the idea that we’re supposed to be sleeping eight hours straight every night. If we wake up in the middle of the night, it stresses us out and we can’t fall back asleep, and that is a problem.

However, knowing that a brief waking period after a few hours of sleep is perfectly normal can help lower your stress about it and prevent your brain going into overdrive with thoughts of “why can’t I sleep? What’s wrong with me?”

So the next time you wake up in the middle of the night try thinking, This is totally normal; I do it. I’ll fall back asleep soon. And it will increase the likelihood that you do.