How do you feel about your "size"?

I recently noticed that the sizes in my closet run the full gamut, from extra small to large, in shirts, skirts, dresses and jackets. And I also noticed recently — while shopping for summer shoes and so, of course, also pausing to try on a wide variety of dresses — that it makes me happy when I fit into a four or six or some equally small size. 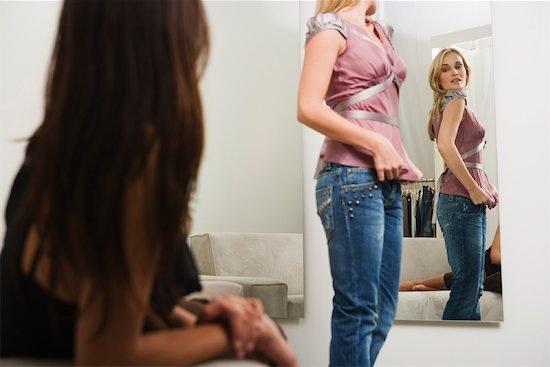 I recently noticed that the sizes in my closet run the full gamut, from extra small to large, in shirts, skirts, dresses and jackets. And I also noticed recently — while shopping for summer shoes and so, of course, also pausing to try on a wide variety of dresses — that it makes me happy when I fit into a four or six or some equally small size. In fact, if I’m trying to decide between two sizes and figure that the best fit is really somewhere in between, I’ll almost always opt for the smaller one.

Even though I’m not particularly wrapped up in my appearance, and I’m the kind of girl who’s never on a diet, and I long ago made peace with the fact that my hips are here to stay, I am clearly not immune to the idea that a smaller woman is a better woman, and that fitting into a smaller size is a form of accomplishment.

It’s a weird place to derive happiness, of course — not from anything I’ve really experience but simply because some designer is probably trying to flatter me with “vanity sizing.” If this was 10 years ago, I’d probably be trying on an eight or 10. But now 10s are sixes, and sixes are twos, and fours have disappeared entirely into zeros. (Which is just awful. A zero. The idea that women should strive towards a vanishing act.)

A recent story by Trish Crawford in the Toronto Star — “Why your size is totally irrelevant, and what people are doing about it” — is a reminder of just how invested we are in a particular “size”. She writes about women walking around with buttons straining on their chest and pants pulling at the hips because women refuse to give up on the idea that they’re a four or a six. Unlike men’s clothes, which are pegged to chest, neck and arm dimensions, women’s sizing is fair more subjective. It’s the reason you have to buy an extra small in Old Navy, a medium in American Apparel, and a large in anything you really can’t afford.

(Plus, I bet men are spared the inane suggestions women are always exposed to when they try on anything and are made to parade what they’re wearing in front of a salesgirl and communal mirror. When I bought a dress the other day, the salesgirl suggested that I just needed to pair it with a cute pair of wedges for the perfect look for a garden party! I almost barfed — not for my lack of garden parties to attend.)

Anyway, now that I’m aware of this tendency on my part, I’m going to try to work a little harder to avoid the trap. After all, once I’ve taken something home and removed the tag, I rarely give another thought to the size I bought. What makes me happy after that is something that flatters in both shape and colour, something that isn’t too baggy or too body conscious (which, I’ve learned, just makes me extra body conscious and makes it harder for me to relax in social situations), and something that just feels good on.

Sometimes, we something has been so drilled into your subconscious — i.e., women need to be thin — you have to make a conscious effort to think your way out of it. It takes a little more work, but can make you much happier in the long run — especially if it helps you realize that the eight really does fit much better.