My husband’s been on a tear around the house lately. I woke up Sunday morning to his brave proclamation that, despite having decided on a colour or doing any prep, today we were painting the front porch. Today! 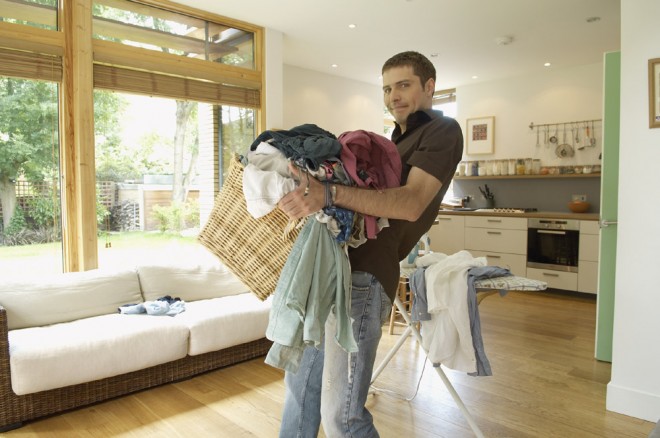 My husband’s been on a tear around the house lately. I woke up Sunday morning to his brave proclamation that, despite having decided on a colour or doing any prep, today we were painting the front porch. Today! And then there was two weeks ago when I found him scrubbing out the scary area under our sink and behind our garbage cans. That same weekend, he was out giving those very cans a much-needed washing out.

What gives I wondered? Turns out his long work hours are leaving him feeling a touch unaccomplished around our house — he feels like he’s running behind on the home maintenance and isn’t a happy man for it. Me, while those items weren’t necessarily top of my to-do list, I certainly appreciated him tackling them.

So maybe that’s why this study from Cambridge University jumped out at me this week. Reported by The Telegraph, the study notes that men are happiest at home when they’re doing domestic chores (say what!?) because (unsurprisingly) arguments and nagging over chores goes down. While that premise sounded right to me, I still wanted to chat about it with some coupled-up men to find out whether its on the mark. Is personal happiness an incentive for men to keep up with household duties?

Toronto-based Dave Pearce agrees, “If you mutually agree on tasks to get done, and both of you accomplish those tasks without the other person asking, then, yes, you will be happier.” Pearce, whose household responsibilities include cleaning the bathrooms, washing out the kitty litter box and basically anything gross continues, “Sure it sucks being the one to take out the garbage, but it sucks more being constantly harangued to take the damn garbage out.”

Part of it also involves fulfilling expectations around chores he notes, “Make sure you’ve had a conversation about your expectations before Sunday morning when you’re thinking about sleeping in and your wife has a list of chores as long as your arm to do. Set the expectations, and deliver. Just like you do on the job.”

“I’m not sure men are actually happiest while physically doing the work but having completed the work and having that accomplishment done is when the happiness begins,” adds Rich Maddox, a Thorold, Ont.-based father and firefighter. “Housework is mundane! I’m never very happy doing housework but when I get a pat on the backside for how great the house looks, that, I like.”

As for my house, while my porch isn’t fully painted, it is in the process of being prepped. And my husband’s finished the necessary repair work needed before it begins. So it’s happiness all around — he feels a sense of accomplishment having started a major project, and me, well, I’m happy not to be tripping up my porch anymore.