Why you might want to try the frozen food aisle

Here’s a fresh take on canned and frozen foods — they’re quick, convenient and more nutritious than you think. 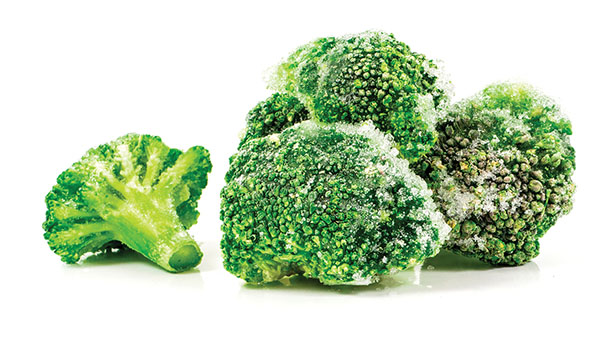 Exposure to heat and light depletes broccoli’s vitamin C as it sits in the produce aisle, says Lindsay Jang, a registered dietitian in Vancouver. “Frozen broccoli may contain higher levels of vitamin C, especially if the fresh stuff has been imported.”

Use it in: broccomole — a healthy twist on traditional guac. Steam it (instead of boiling) to preserve water-soluble vitamins, then blend it with avocado.

Heat from the canning process doubles the amount of lycopene, an antioxidant that may reduce the risk of heart disease and prostate cancer.

Use them in: soups and sauces, or drain and roast for a quick side dish. Look for cans of yellow tomatoes — they’re high in potassium and folate.

Three-quarters of a cup contains as much protein as half a chicken breast, as well as half your recommended daily amount of fibre. Unlike dried chickpeas, they don’t need to be soaked overnight.

Use them in: breads and muffins to boost fibre and protein. Jang also suggests mashing them (instead of potatoes) or roasting them for a crunchy snack.

Use them in: pasta sauces or stuff them with mushrooms and goat cheese for an elegant appetizer. “You can also use them as edible cups for your favourite dipping sauces.”

“Canned asparagus has higher levels of iron than fresh, boiled stalks and is an excellent source of folate,” Séguin says.

Use it in: omelettes (asparagus pairs especially well with eggs), or purée for velvety soups.

“Betanin, the pigment that gives them their colour, may help reduce yourrisk of skin, lung and liver cancer,” says Séguin.

Use them in: juice or baked goods like brownies. A 2014 study by researchers at the University of Western Australia discovered that the nitrates in beet juice enhance athletic performance.

“It’s rich in manganese and contains bromelain, an enzyme that helps blood circulation and digestion and reduces the risk for cardiovascular disease,” Séguin says.

Use it in: healthy desserts. Add to yogurt, or blend 2 cups with a cup of water and the juice of two limes for a quick, sugar-free twist on sorbet.

Use them in: salsa for grilled fish. Defrost berries under cold water, then mix with chopped peppers, red onions, habaneros, lime juice and cilantro.