The practice has been linked to lower blood pressure, heart rate and cortisol levels. 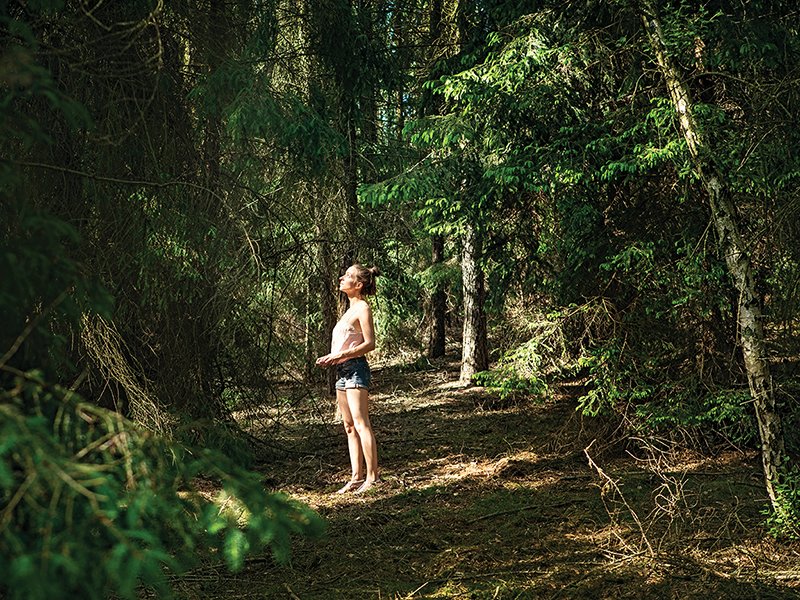 Roughly 81 percent of Canadians live in cities, but we would really benefit from a little more tree time. Consider the Japanese practice of shinrin-yoku (literally “forest bathing”). It’s essentially a walk in the woods, but with a strong meditative component. The practice has been linked to lower blood pressure, heart rate and cortisol levels. And, in a series of studies from Japan, researchers also discovered that people who spent two days walking in a forest (two hours in the morning on the first day, and two hours both in the morning and afternoon on the second day) showed an increase in natural killer cells, part of the bodies’ frontline defense system against tumours and infections.

If stepping into the woods makes you feel at home, biologically speaking, that’s because you are. Yoshifumi Miyazaki, a leading researcher of “forest therapy” in Japan, argues that the human body is designed to adapt to nature. After all, it wasn’t until 200 years ago that humans began migrating to cities en masse — that’s less than one percent of human history that we’ve been living in urban areas.

Related: How nature can benefit your health and happiness

“Nature isn’t always beneficial, struggling to survive in the wilderness can be very stressful. But it is restorative,” says Jiaying Zhao, Canada Research Chair in Behavioural Sustainability. “It gives you a sense of escape and retreat and it is beneficial to get away from the urban space.” Though she adds that experts are unsure what it is exactly about the forest that we respond to. “There are theories that it could be the oxygen and clean air, the colour green or the fractal patterns in nature, which are less sharp than those of cities.”

If you need more evidence it’s time to take a break from the urban jungle, consider this: a study published last year in the aptly-named journal Nature found that adding 10 more trees per block in Toronto was equivalent to an individual’s health as raising their annual income by $10,000 or being seven years younger.

How to get started

What’s the difference between forest therapy and, well, a hike? Hilary Leighton, a Victoria-based ecopsychologist and forest therapy instructor, explains.

Most importantly, refrain from talking, eating and looking at your phone. “This isn’t a walk in the park with your dog,” says Leighton. “Put away the coffee cup and listen to the natural world. Allow the silence to bathe all your senses.”

Be silent and move toward whatever attracts you, whether it’s a stream, a bush or a tree. Approach it and reflect on its presence. If you’re feeling daring, try going barefoot on the soil — just watch out for jagged rocks and roots.

Related:
How solitude pulled one woman out of grief and heartache
What Ben Mulroney learned from climbing Mount Kilimanjaro
How nature can benefit your health and happiness