Happiness and the benefit of an emergency tea party

Like me, it's possible that you have never heard of Indian bodybuilder and former Mr. Universe, Manohar Aich - at least, I had never heard of him until earlier this week, when he turned 100 and offered some wise words about life and happiness. 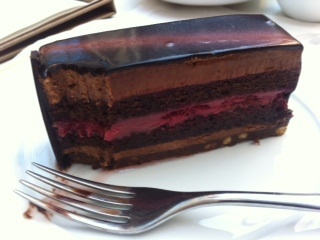 Like me, it’s possible that you have never heard of Indian bodybuilder and former Mr. Universe, Manohar Aich – at least, I had never heard of him until earlier this week, when he turned 100 and offered some wise words about life and happiness. While the former Mr. Universe clearly spent a lot of time sweating, he wasn’t sweating the small stuff. He claims that his secret to longevity has been the ability to avoid tensions and maintain happiness. Aich, who overcame both tremendous poverty and a stint in prison, says that he has always been able to remain positive and inject even serious trials with levity. “I never allow any sort of tension to grip me. I had to struggle to earn money since my young days, but whatever the situation, I remained happy,” Aich said to the Associated Press.

Aich’s sage words remind me of something that happened recently. I found myself steeped in delicate luxury at the beautiful new Mandarin Oriental, Paris and I was finding it hard to relax. I was overloaded with deadlines, I was thinking about tax season, I was worried about a family member who was ill, and I couldn’t initially bring myself to appreciate the moment. I was rushing from place to place, rarely even bothering to look up; I became slightly dismayed when I realized that I had passed by the magnificent Place de la Concorde, the intersection of the Jardin de Tuileries and Champs Elysees and the Obelisk, one of my favourite landmarks in Paris, without even stopping.

I went back to my hotel and I put down my computer and my notebooks. I went down to the courtyard garden of the Mandarin Oriental, an oasis of manicured trees, fresh white flowers and crisp beige linens, and I ordered a glass of Champagne, which I sipped slowly. Then I had a pot of green tea and a delectable patisserie from the hotel’s in-house Cake Shop: L’Esperanza, a perfect combination of praline and hazelnut crust, chocolate biscuit, chocolate and raspberry mousses, and a smattering of perfect, fresh raspberries. Then, later, as the sun was setting, I went back to Place de la Concorde and I slowly walked across the bridge to the Left Bank as the sun was setting just behind the Eiffel Tower. I allowed myself to tap into the magic of that moment and felt a slight lump in my throat, as I have so many times while wandering the streets of Paris.

I get to travel a lot for my work, and it’s a privilege. But, like all things that become commonplace, it can be too easy for the novelty to wear off. The idea that I could become immune to Paris’ charms, that walking its gilded streets could become mundane, was somewhat terrifying. It’s too easy to become so wrapped up in just getting through the grind that we forget to notice the charming little details that colour daily life, whether at home or when on the road. To slow down, to recognize that the world will not end if things do not go perfectly, and to remember to indulge ourselves when it comes to the small things that make us happy – these are the things that 100-year-old Manohar Aich knows and that I am trying my best to remember.