The science of gut health could radically change modern medicine

Within one year, you’ll be able to have  the bacteria that live in your digestive tract  analyzed. Within 10, your grocery list could be tailored to those results. 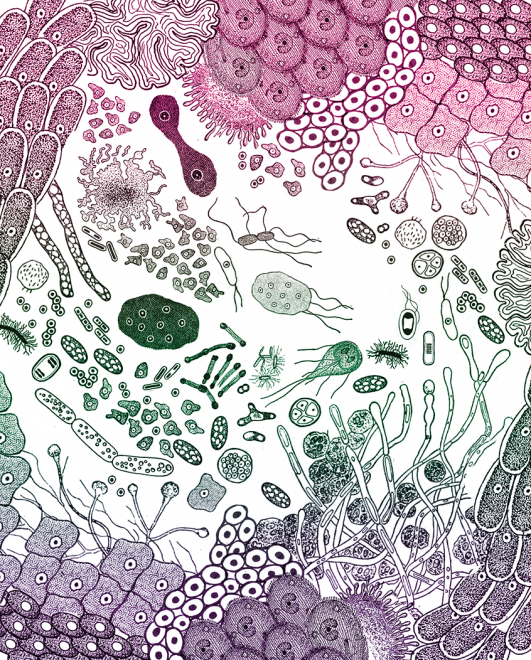 This story was originally published January 2016 and has been updated.

Chances are you don’t routinely think about the forces roiling in your gut. But all too often, there’s a complicated turf war being waged in there — think of it as an intestinal Game of Thrones.

You might have strange, hard-to-diagnose symptoms of feeling subpar, like bloating, cramps or a persistent brain fog. Or maybe you get every cold that comes around, have chronic sinus infections or suffer from an autoimmune disorder. Power-hungry microbes are likely to blame.

The typical North American gut is home to some 100 trillion representatives of anywhere from 300 to 1,200 different species of bacteria — all vying for real estate. When they work in harmony, these microbes build peaceful kingdoms. In return for their room and board, they happily coax nutrients out of dietary fibre, make vitamins, produce hormones, fend off disease-causing pathogens, regulate our metabolism and fine-tune our immune system. They even influence our moods and affect our behaviour. As Erica Sonnenburg writes in The Good Gut, “These bacteria are paramount to our health and well-being.”

Related: Why am I so gassy?

Each species has its own predilections, food preferences and appetites. If they don’t get what they want, it can get pretty nasty. Without the food they need, the starving microbes turn on us. And that has implications for the development of inflammatory bowel disease, type 2 diabetes, obesity, eczema, asthma, autism, Alzheimer’s and Parkinson’s. Basically, when things go wrong in the gut microbiota, something goes wrong with us.

Although scientists have been studying the microbiota for years, DNA sequencing technology has rapidly accelerated their research. Every month, another study comes out with startling discoveries about this microscopic universe: how four key bacteria species can ward off the development of asthma in infants, how a microbial imbalance can lead to celiac disease, how certain microbes affect rheumatoid arthritis and so on. Much of this research indicates that these microbial communities are a major factor in the skyrocketing rates of allergies, autoimmune disorders and obesity. As Sonnenburg, a senior research scientist at the Stanford University School of Medicine, says, “I think there’s something fundamental about our microbiota that’s making us sick.”

Understanding how this diverse cast of characters behaves and interacts could lead to new treatments, create preventive measures and radically change the way we view modern medicine. And we are on the cusp of this change: Within the year, the average gastrically curious person in Canada will be able to have their microbiota analyzed. Within 10 years, we might be able to shop for food that’s tailored to the particular needs of our microbial community and prevent asthma with a prebiotic cocktail. While the research is still nascent, this field has the potential to solve some of the most prevalent ailments of the modern age. If we can fix our microbiota, the thinking goes, we can transform our health.

Books like Sonnenburg’s, Robynne Chutkan’s Gutbliss and Giulia Enders’ Gut: The Inside Story of Our Body’s Most Underrated Organ are bringing our bowels — and all their attendant bacteria — into the mainstream consciousness. We are more aware than ever of the importance of a healthy digestive system. (And we are willing to share the intimate details; at the checkout with Enders’ utterly charming book, I learned all about the cashier’s brother’s intestinal troubles.) For a culture that has bathed itself in hand sanitizer, this embrace of bacteria is a profound shift. The irony is that our obsession with cleanliness helped us get into this mess.

Safe drinking water, treatments for bacterial infections, food that doesn’t spoil quickly — these are all fantastic and important innovations, but they may have an inadvertent side effect. As Brett Finlay, a microbiologist at the University of British Columbia, explains, “It’s the disappearing microbiota hypothesis: With each generation, as we clean up, we’re decreasing the potential microbial pool that we can tap into. Everyone is becoming very similar, and we don’t have that kind of diversity.”

If your microbiota isn’t populated by many kinds of tiny creatures, for instance, it becomes harder for it to spring back after a dose of antibiotics, an illness or a case of food poisoning. And because your gut is essentially the control centre of your immune system, if it’s depleted, you’re likely to get sick more often.

In studying stool samples from around the world, scientists have found that hunter-gatherer tribes in Africa, the Amazon and the South Pacific harbour many more — in some cases, hundreds more — species of bacteria, proteins and yeasts in their guts than Westerners. “These groups separated by oceans have microbiota that actually look fairly similar,” says Sonnenburg. “There’s a lot of evidence that these microbes that [Westerners] are missing appear to be beneficial.”

Just how robust our microbiotas become is largely determined by the way we’re delivered as babies, what we’re fed and how much dirt we come in contact with. In utero, we float in a pretty much germ-free environment, but as soon as we’re born, we’re rapidly colonized by microbes, and that means everyone’s microbiota is unique. (Even identical twins can have vastly different microbiotas.) And it turns out that exposure to dust and bugs and germs, “the very entities that the immune system must monitor, is critical, especially early in life, for proper immune-system development,” says Sonnenburg, pointing to all the modern practices — C-sections, formula, overly clean houses, processed foods — that limit that exposure.

This strange yet powerful kingdom is essentially built by the time we’re three to five years old. How well it thrives is largely determined by our diet, and in particular how much dietary fibre we eat. Microbes rely on complex carbohydrates found in plant material, legumes, whole grains, fruits and vegetables. “If you starve yourself of dietary fibre, the microbes in your gut don’t have any food to eat, so they turn to their only other option, which is the mucus lining of your GI tract,” says Sonnenburg. “And that starts an antagonistic relationship between our human selves and our microbes.” Since the body doesn’t want microbes getting too close, this sets off an inflammatory response, which, depending on your genetic makeup and other factors, can lead to a variety of diseases.

The other key factor is how often we take antibiotics. “With antibiotics you’re carpet-bombing the microbes,” says Finlay. “And each time you assault your microbiota, it doesn’t come back quite the way it was, and you get further and further away from where you were.” A study from the University of Manitoba linked taking four courses of antibiotics in the first year of life to a greater risk of developing asthma. Another study from the Johns Hopkins Bloomberg School of Public Health has associated antibiotic use in kids with obesity.

It’s clear that we have a very complex relationship with the bugs in our gut, but there is still a lot that needs to be teased out about how these microscopic characters operate and how that, in turn, affects our health. As Rob Knight, director of the Microbiome Initiative at the University of California, San Diego, says, “It’s very difficult to tell if microbial differences you see associated with diseases are causes or consequences.” In other words, it’s hard to know whether someone’s gut microbiota has changed because they have diabetes or if their gut played a role in the development of the disease. To make things trickier, scientists have found that microbes act differently in different situations. A certain species will behave in a beneficial way in one person, but in someone else, it could become more pathogenic.

How bacteria behave is something Emma Allen-Vercoe is trying to untangle with a contraption of flasks, tubes and monitors she has built in her lab at the University of Guelph. The gurgling and rather fragrant Robogut is a kind of life-support system for microbes that allows her team to cultivate and study the behaviour of organisms that can’t typically survive outside the gut. Currently, it houses about 200 species.

It’s tempting to think that there could be an easy fix — a strain of bacteria or a dietary supplement — that could repair an imbalanced microbiota. Allen-Vercoe says preliminary research shows that “there is no one-size-fits-all diet,” pointing out that the amount of calories your body extracts from a granola bar, say, or a piece of toast depends in large part on, you guessed it, your microbiota. And once more research is correlated, perhaps within the next decade, we might be able to buy certain food products that are tailored to our microbes’ health. “You would get your microbiota tested, and based on that we will let you know the profile of the sorts of food best suited to your digestive needs,” she says. “If you’ve been told you are a type 3, then you can go buy bread that is baked with ingredients tailored to type 3 microbiota, so you get more benefit out of it.” It wouldn’t be a cure, but it might help.

She’s analyzed her own microbiota (she has robust populations of Adlercreutzia equolifaciens and Akkermansia muciniphila — though she doesn’t yet know if they are friend or foe). And Microbiome Insights, a Canadian company that analyzes samples for academic and industry clients, is working toward expanding its service to the public by this summer, so that for $100, you too can have your microbes classified.

This marks an interesting juncture in the research. We know enough to see the importance of the microbiota, and the tremendous potential of future development, but we don’t yet have a newfangled solution to the problems caused by one that’s out of whack. “You can go and get your microbiome analyzed so you know whether you’re at risk for Parkinson’s, Alzheimer’s, autism — we know that microbes affect these. The problem is, what do you do about it?” asks Finlay. “We don’t have the tools yet.”

At this point, the best advice for a healthier microbiota is frustratingly anticlimactic. “While we figure out the mechanisms… it boils down to eating a healthy plant-based diet,” says Sonnenburg.

She tries to follow her own advice, especially when cooking for her two young daughters. “Because of the rates of Western diseases rising so rapidly, especially among children, I feel like we don’t have the 20 years we’re going to need to wait,” she says. At that point, there’s going to be generations of people whose health is a disaster. We need to — with the knowledge that we have — make changes now.”

Microbiome: The collective genome — the DNA — of all the microbes that live inside and on the human body.

Gut microbiota: The collection of micro-organisms (bacteria, fungi, protozoa and viruses) that live in the digestive tract, mostly in the large intestine.

Prebiotics: Essentially, these are types of food for microbes. They can be made of different sugars or plant fibres that we can’t digest but that microbes can.

Probiotics: These are live micro-organisms that we consume, often in dairy products. While more research is needed to determine which ones are best for which diagnosis, probiotics have been shown to have a positive impact on our health.

Related:
10 simple ways to improve your digestion
We’re pooping wrong, and more lessons from the book Gut
Do you listen to your gut?