Time to shape up! Exercise can help prevent everything from cancer to creaky joints. Bonus: You'll look as good as you feel 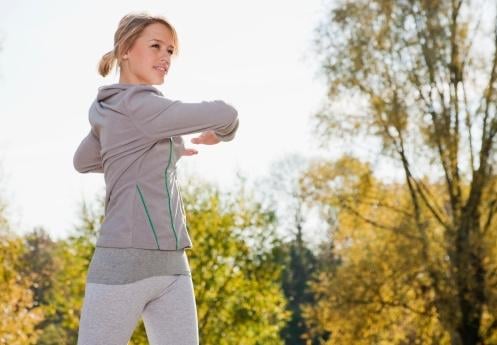 Never mind fitting into skinny jeans: True health means feeling as good as you look. Walking about 150 minutes a week (in other words, just 20 a day) can help you sidestep many common diseases. That’s because regular exercise helps to:

According to the Canadian Cancer Society, a third of all cancers can be prevented by eating nutritious foods, being active and maintaining a healthy weight. Doing moderate to high-intensity exercise for 30 to 60 minutes a day cuts your risk of breast cancer, according to the National Cancer Institute in Maryland; a 2008 meta-study in the British Journal of Cancer found that regular exercisers were 24 percent less likely to get colon cancer. As well, working out helps you manage your weight, which reduces your risk of breast, bladder, esophageal, kidney, liver, pancreatic and uterine cancers.

Even people who already have the disease can benefit: Over the past decade, exercise has gone from being considered dangerous to an activity encouraged by most oncologists (especially walking). Researchers are studying its energy- and strength-boosting effects on people living with cancer. Since 2006, Roanne Segal, a medical oncologist with the Ottawa Regional Cancer Centre, has been running a clinical trial where breast-cancer patients perform 30 minutes of aerobic activity and strength training three times a week. The women are becoming enthusiastic, devoted exercisers, Segal says. “They really are showing an improvement in their quality of life.”

Taking a walk lifts your spirits, but that feeling might go deeper than you thought: Getting active actually helps beat down depression and other mood disorders. “Large epidemiological studies suggest physical activity has a preventive function in mental health problems,” says Guy Faulkner, associate professor at the University of Toronto and editor of Mental Health and Physical Activity. Exercise is recommended by mental-health experts and should be prescribed more often than it is now, says a meta-analysis presented at the Anxiety Disorders Association of America in Baltimore last year. Research even suggests that for some people, working out can be as beneficial as medication and other therapies in treating depression. Lucy Gallson, a former Curves circuit trainer from Corbeil, Ont., has helped many people manage depression with exercise. “A lot of women say it clears their minds, relaxes their bodies and re-energizes them,” says Gallson. She herself began running nearly 30 years ago to help with her own depression, and she now power walks 3 to 5 km every morning. “Without that, I would be in a lot of trouble,” she says.

“Regular brisk walking can reduce your risk of heart disease by lowering blood pressure, cholesterol and blood sugar, helping you maintain a healthy weight and reducing inflammation,” says Beth Abramson, a cardiologist based in Toronto and spokesperson for the Heart & Stroke Foundation. Having her third heart surgery at 31 forced Wendy Carr to realize that she needed to exercise to stay alive. “You have to make sure that you push yourself and do things so that you can live a strong and healthy life,” says the 35-year-old from Milton, Ont. She works out every day, taking hour-long walks outside in warmer months and jogging on her treadmill. She also uses Nintendo Wii Fit and workout videos. “I always have my heart monitor on so I stay inside my target heart rate,” she says.

Although many people with arthritis are worried exercising will hurt their knees, they shouldn’t be: The American College of Sports Medicine recently released a review of studies that found exercise has more benefits for knee health than drawbacks. In fact, numerous studies show exercise helps reduce stress on weight-bearing joints by making cartilage healthier and stronger, says Kam Shojania, head of rheumatology at the University of British Columbia. When his patients — mostly women in their 40s — step into his Vancouver office with arthritis pain, he tells them to start working out.

In addition to strengthening your joints, exercise can help you lose weight, which reduces the load on your knees. It also boosts bone health, helping to fend off osteoarthritis. While combatting a predisposition to osteoarthritis and rheumatoid arthritis can be tough, regular exercise is half the battle, Shojania says. His wife goes to the gym four times a week to help her avoid getting the arthritis her mother has. “She’s fighting her genetics and she’s doing well, because she’s avoiding obesity and keeping fit.”

Clip on your pedometer: Walking 10,000 steps every day combined with modest weight loss reduces your risk of type 2 diabetes — even if you’re pre-diabetic. A 2011 Australian study found that people who went from 3,000 to 10,000 daily steps five days a week improved their sensitivity to insulin threefold, significantly cutting their risk of type 2 diabetes. And if you have diabetes, vigorous walking is an excellent blood-sugar buster, lowering levels for many hours after a workout, says Jon McGavock, exercise physiologist and University of Manitoba assistant professor, who works with kids with diabetes. He says exercise can even help them need less medicine. “The benefits are really long-lasting.”

Stacey Mortenson knows that firsthand; the 36-year-old Saskatoon music teacher has always been fit, but after being diagnosed with type 1 diabetes at 33, she knew it was more important than ever to work out. “As a single parent, I was running, and I felt guilty sometimes for the time I was putting into it,” she says. “As soon as I got diabetes, the guilt disappeared, because by working out, I’m going to be around longer for my daughter.”