The truth about boosting your metabolism

Is it possible to burn hundreds of calories while resting? Find out what it really takes to rev your metabolism and lose weight. 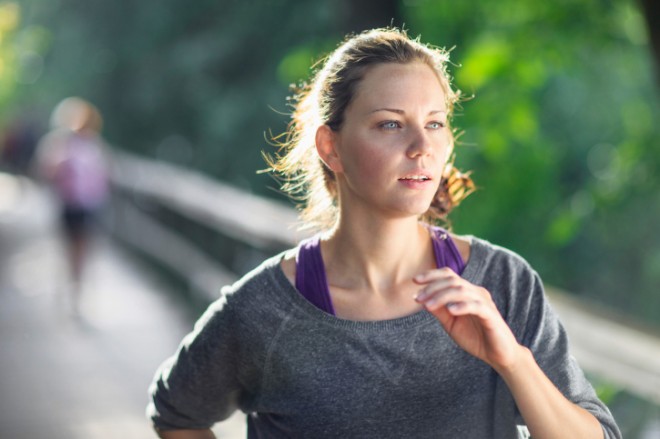 Google “boost metabolism” and you’ll find words like “magic” and “miracle” in the results. I’m here to dispel these findings, and let you know that when it comes to your metabolism, there is no magical solution.

Most “secrets” for boosting your metabolism are related to your resting metabolic rate (RMR), or how many calories you burn at rest. An easy way for women to figure out their daily RMR is take your body weight (in pounds) and multiple it by nine. To figure it out per hour take that number and divide it by 24.

The more you move and the more intensely, the more calories you burn during the activity. However, most of the tips and tricks are about boosting metabolism purport to boost RMR. In other words, they have a miracle method to make you burn extra calories at rest. And none of them work. I’ve taken a look at a few of the most popular myths to add a little perspective on how much they really boost your RMR:

Myth 1: Adding muscle boosts metabolism
I wish. I often hear people say that each pound of muscle you add boosts resting metabolism by 50 calories per day. By this math, if you train hard and add 10 pounds of muscle you’ll burn 500 extra calories each day. Wrong.

I spoke with obesity researcher Claude Bouchard of the Pennington Biomedical Research Center who says, “Skeletal muscle only accounts for 20 to 25 percent of resting metabolic rate.” He explains that muscle has a low resting metabolic rate. Each extra pound of muscle only burns six extra calories a day, not 50. What’s more, he explains that a pound of body fat burns two calories per day at rest.

If you gain 10 pounds of muscle you’ll burn 60 extra calories per day while resting. If you lose 30 pounds of fat, you’ve lost the same 60 RMR calories. They cancel each other out.

Myth 2: High intensity interval training revs up metabolism
Interval training is great for boosting physical performance. It’s punishing but it makes you faster and can even add some extra muscle. However, the belief that it boosts your RMR for several hours after you finish is not true.

A University of South Australia study found that after intense activity, the extra calories burned was between six and 15 percent. What’s more, the better shape you’re in, the lower the caloric burn post-workout. One small study found that men who were in optimal shape only burned five percent of the calories they did during the workout once it was over.

But what about intervals? In 2005, the University of Alberta did a study using male cyclists riding at intervals or a steady pace. They found no significant difference in caloric afterburn between the two groups. A similar study compared steady pace with interval runners and asserted that calorie afterburn is largely irrelevant and that the biggest contribution to weight loss is made during the exercise. Essentially, the same amount of work, whether at a steady pace or via intervals, makes no difference to the amount of calories burned post-workout.

A University of Limburg study also showed that weight-lifting does not boost your sleeping metabolic rate either.

Myth 3: Getting in shape boosts metabolism
Let’s look at the physics. If you lose 30 pounds, that’s fewer pounds you have to carry with you everywhere you go. You’ve dumped a 30 pound backpack for every mile walked, flight of stairs climbed, chair stood up from. It also means fewer calories burned doing all those things.

Think of a beginner running a mile — they burn lots of calories because they’re in terrible shape — their heart races, lungs burn and they may even feel sick. Six months later, when they’re in better shape, their body doesn’t have to work as hard and they’re more efficient. This is known as caloric fuel efficiency and it translates to every activity using less energy the more fit you become (even sleeping).

The amount of calories you burn on a lower-calorie diet also slows things down.

“The calorie deficit decreases after the first day because energy expenditure starts to slow down immediately in regards to this [a caloric] restriction,” says Eric Ravussin, director of the Nutrition Obesity Research Center at Pennington Biomedical Research Center. “What is a 500-calorie deficit on day one is less so on day two, and even less on day three, and so on.”

Early on, a significant portion of this is simply due to a reduced thermic effect (the extra calories you burn via digestion) of food Ravussin explains. When you eat less, your body burns fewer calories because its digestive system has less work to do. Also, “When you lose weight this is going to lower your resting metabolism during the entire day,” he says.

What you can do to maximize your efforts
Don’t take pills. The most popular ones are central nervous system stimulants that essentially make you jitter the weight away and some can cause psychiatric disorders. “The best supplements resulted in only two or three pounds of weight lost a year,” says Dr. Yoni Freedhoff, an obesity expert in Ottawa. They’re poorly regulated and potentially dangerous.

While you can’t control RMR, what you do have control over is how many calories you burn via activity. The more you move and the more intensely you do it, the more calories you burn each day. As endurance builds, and you find love for certain types of activity, you can go harder and longer. Don’t only focus on the number of calories burned, focus on being good at something physical. Then do it a lot.

James S. Fell, MBA, is a certified strength and conditioning specialist with the National Strength and Conditioning Association. His book Lose it Right is available from Random House Canada April 1. Visit his site for a free metabolism report.