Adidas used motion-capture cameras and went through more than 100 prototypes to perfect this beauty. 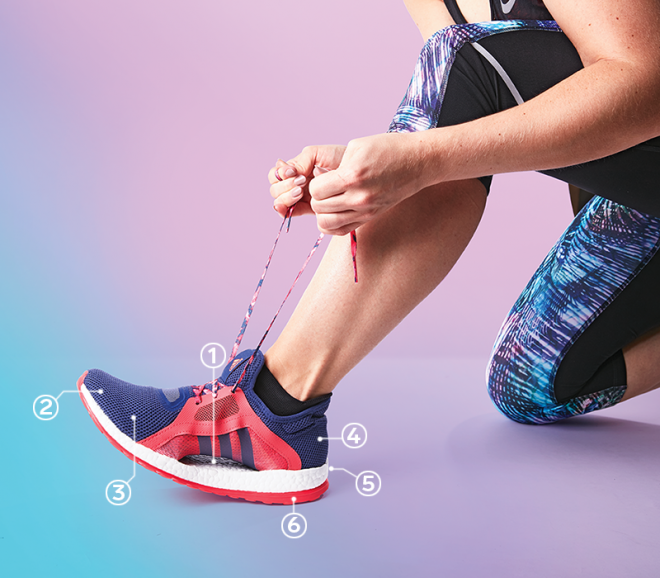 Fifty years ago, women weren’t allowed in the Boston Marathon — it took a 20-year-old track star named Kathrine Switzer, signing up with her initials, to prove that women have every business running alongside men. Now we actually outnumber them in races, representing 57 percent of the field (and in half-marathons, we climb to 61 percent). But we tend to hit the asphalt in shoes first made for men, then shrunk down for us. At Adidas, the prototypes are technically unisex, but they’re also all a men’s 9.5, so few women get to try out the new kicks. Not so with the new Pure Boost X, the first Adidas running shoe designed specifically for and on women. Here’s how it came together.

The shoe’s most distinctive feature — its floating arch — caused designers a boatload of anxiety. “We tried 15 prototypes before we even had something we could put on people’s feet,” says Angus Wardlaw, a director of the company’s Future Running division. Women tend to have higher arches than men do, which are harder to accommodate when the shoe is locked into position; when the arch is released, it moves when you do.

“We wanted to build a running tight for your foot,” Wardlaw says. That means stretchy mesh material that can hug and adapt to a variety of feet.

The front of the shoe looks fairly wide, but Wardlaw says that’s because of the narrow arch. Since our toes and metatarsus expand when we run, the stretchy fabric in the forefoot should help prevent bunions.

Women on the run have a lot of movement in the Achilles area around the heel. The shoe is a little harder on the sides for support, but there’s a soft notch in the middle to reduce pressure and the likelihood of blisters.

In order to provide a stable platform for the foot, Adidas increased the width of the spongy foam (or, as the company calls it, the Pure Boost).

The bottom of the shoe is ridiculously bendy. Says Wardlaw, “It’s like a web, so it doesn’t matter where the foot wants to flex — the shoe will flex.”

Related:
Everything you need to know about running shoes
Shoe-shopping tips from the pros
The best running shoes, sneakers and cross-trainers