How tough is tough mudder? Find out what it's really like

“Am I ever going to make it to the finish?” Alison Dunn asks herself as she takes on the challenge of the latest fitness craze — which includes the likes of crawling through mud, running through live wires and jumping over pits of fire. 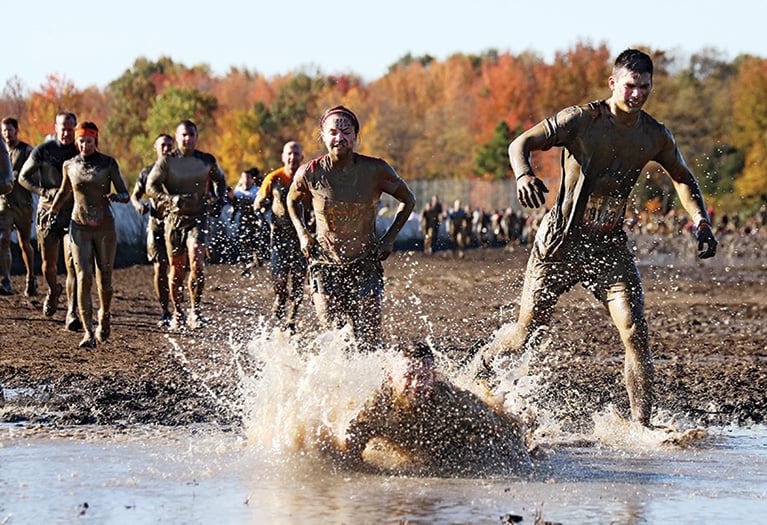 To my tired, waterlogged eyes, the wall looming above me looked taller than a mountain. It was, in fact, even called Everest, a 15-foot curved quarter pipe that I was expected to run up and climb over. Standing at the bottom, bruised, dirty and out of breath, all I could think was, “What am I doing here?”

“Here” was a 16-km extreme obstacle course designed by Tough Mudder, a company co-founded in 2010 by a former British anti-terrorism agent. The event (there are now 53 in five countries) is part of a growing trend as runners abandon road races in favour of facing obstacles, from scaling walls and crawling through mud to jumping into ice water en route to the finish line. More than one million people have tackled Tough Mudder, earning the coveted orange headband and collecting $5.6 million for the Wounded Warrior Project, a charity for veterans in the United States and Canada.

“It’s very different from other running events,” says Alex Patterson, Tough Mudder’s chief culture officer. “It’s not just a three-mile fun run. It’s seriously gruelling.” So how did I, an almost 40-year-old hockey mom from the burbs, wind up facing down Everest on a cold day at Mount St. Louis Moonstone ski resort near Barrie, Ont.?

It actually started a few years ago, when I joined a fitness group filled with like-minded fitness fanatics. After finishing two marathons, I was getting tired of running in a straight line. When our group leader told us about Tough Mudder, it seemed like just the challenge I needed. I wasn’t the only one — 30 of my workout buddies joined forces to train and compete together.

Our Tough Mudder training plan started in January and included belly crawling through snow, running up muddy hills, doing intense hot yoga-CrossFit sessions and performing burpees on the beach — hundreds and hundreds of burpees. The training was critical to making it through the course and we took it very seriously. So seriously, in fact, that one exhausted friend broke her wrist in two places after tripping on rough terrain. 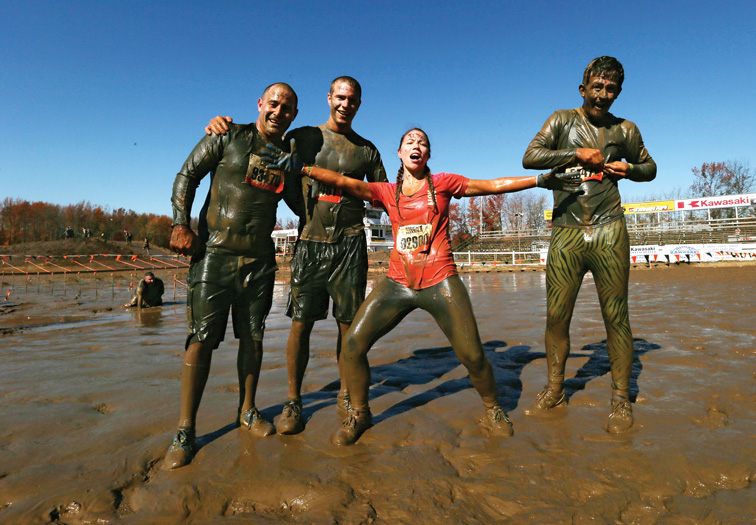 When the big day finally arrived, we were in great spirits as we headed to the start line, but before we got there, we found ourselves faced with an eight-foot wall. We gamely scaled it only to discover it wasn’t an obstacle at all — just a hurdle before the starting line. It was Tough Mudder’s way of reminding us this was no ordinary running race.

Off we went. One of the first obstacles was the Arctic Enema, a Dumpster filled with ice water so cold my muscles seized up and I could barely pull myself out. And that was just the beginning. We spent the next four hours trekking up and down the resort’s ski hills and gritting our teeth through mud and freezing water. There were a total of 22 obstacles, including monkey bars (with a drop into icy water if you couldn’t make it across), a mile of mud hills, tunnels and barbed wire, as well as pits of fire to leap over and fields of live wires (10,000 volts!) to sprint through.

There were a few war wounds. One of my teammates bashed her head on the Arctic Enema and completed the course with blood trickling down her forehead. Another twisted her ankle on the Dirty Ballerina, a series of five-foot-wide mud pits you had to jump over in quick succession, and she limped up and down the ski hills leaning on teammates.

But somehow, we made it through to the base of Everest. Could I scale it? I took a deep breath and ran hard up that wall. Two burly men reached down and grabbed my arms. I hung from their hands, crying, “No, it’s okay, let me go!” (The surface of the wall is coated with mud and grease, in case anyone thought it would be too easy.) “No way!” they replied — all Mudders swear an oath to help their fellow participants from other teams — and hauled me over the top. I waved wildly to my cheering teammates below.

Elated, we crossed the finish line and received our coveted orange headbands. It’s an entirely different feeling from finishing a marathon. Both are tough, physically and mentally, but Tough Mudder requires an extra ounce of courage.

I proved to myself that I am both mentally and physically tough enough to overcome my fears, clear all obstacles and make it to the end. Yes, now I know for sure that I am one Tough Mudder.

Before any Tough Miuddler event, participants gather to swear this oath:

As a Tough Muddler I pledge that:

I put teamwork and camaraderie before my course time.

I help my fellow Mudders complete the course.

I do not whine — kids whine.

I overcome all fears.

I understand the Tough Mudder is not a race but a challenge.

Tell us in the comment section below, have you ever run a Tough Mudder? And click here if you’re curious about that 10,000 volts situation.