Can you get a good workout from fitness games?

What you should know about this new high-tech exercise trend 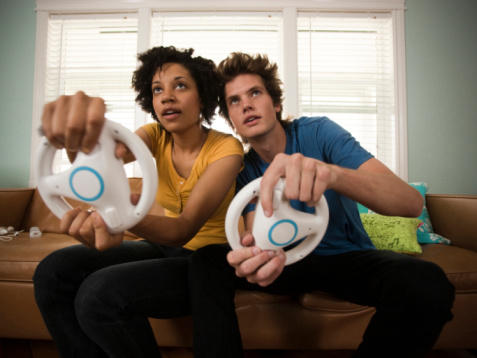 Ever since Nintendo’s Wii took over millions of living rooms four years ago, gaming has been getting up off the couch. Just this fall, both Sony PlayStation and Microsoft Xbox launched active systems, aptly titled Move and Kinect, respectively. Gaming today is touted as more active, social and, well, healthier than ever before. And it’s not just kids gaming companies are after: They’re taking aim at adult women, and a growing genre of products is focused on fitness. The technology is impressive. But is it making our workouts any smarter?

Manufacturers are pretty quick to describe exergames — yes, that’s what they’re called in the gaming industry — as a revolutionary approach to getting in shape. But working out in front of the TV is nothing new. After all, Jane Fonda and Richard Simmons had people sweatin’ to the oldies when video games were still in their infancy. The main difference is that TV fitness 2.0 has the ability to give you instant feedback on your technique, provide more specific encouragement, help you set goals and make suggestions for mixing things up. (And if you find your digital trainer too chirpy, you can switch to another.)

So how do exergames measure up — and are they worth cancelling your gym membership for? A growing body of scientific literature suggests that exergames may have some unique benefits. Darren Warburton, director of the Cardiovascular Physiology and Rehabilitation Lab at the University of British Columbia, has found video games do more than help people work out harder and more often: Players really enjoy themselves, which overcomes a major hurdle most people face when getting active. “Typically, within six weeks of starting a new exercise program, there’s a marked drop-off in participation — close to 50 percent. But in our research, people in the interactive-video-game program attended 30 percent more classes than the group who were doing traditional exercise training.”In one of Warburton’s studies, participants who used a fitness video game burned over 25 percent more calories than those who performed the same activity with no game component. The clincher: They didn’t notice they were working harder.

But some experts are skeptical that gaming is enough — or good enough — exercise on its own. “I’ve played them. They’re a lot of fun and they do get you off the couch,” says Angela Pereira, president of First Line Kinesiologists. “But I wouldn’t say that they replace going to a gym or working with a personal trainer.” Pereira notes that, all the hype aside, exercise games have both benefits, like continual positive reinforcement, and drawbacks, like the lack of one-on-one, qualified supervision. Of course, not all active games are going to give you a good workout. Even the game makers agree it’s unlikely that you’re going to get enough exercise from these games to make them your only source of physical activity. That said, video-game fitness is making serious strides toward becoming real exercise. Games can definitely help make your fitness routine less, well, routine. And if you’re not a gym-goer, they’re a great way to get moving. Take that, Ms. Pac-Man.

Exercise has never been more portable. Here are the ones that we think are worth talking about:

1. Nike+ GPS ($2) This brand-new app from Nike uses the GPS in your phone to map your route, recording pace and distance. It also features inspirational messages from such athletes as Serena Williams and Lance Armstrong.

2. Couch to 5K ($3) A series of 30-minute interval workouts designed to get you from a minimal fitness level to the ability to run 5 km non-stop. The complete program takes only nine weeks!

4. iTreadmill ($1) Turn your iPhone into a pedometer as iTreadmill tracks steps, distance and average speed while in your hand or your pocket. Calibrate your stride and add your weight, and the app will track how many calories you burn.

5. iMapMyRide (free) This free cycling app is incredibly simple to use: Start it, slip it into your pocket and check it out when you hop o your bike. It records metrics such as duration, distance, pace, speed and elevation. You can also buy iMapMyHike, iMapMyRun and iMap MyWalk apps.