Does having a sister make you happier?

A story in The New York Times - Why Sisterly Chats Make People Happier - explores a recent study that found that adolescents who have a sister are less likely to report such feelings as "I am unhappy, sad or depressed" and "I feel like no one loves me." 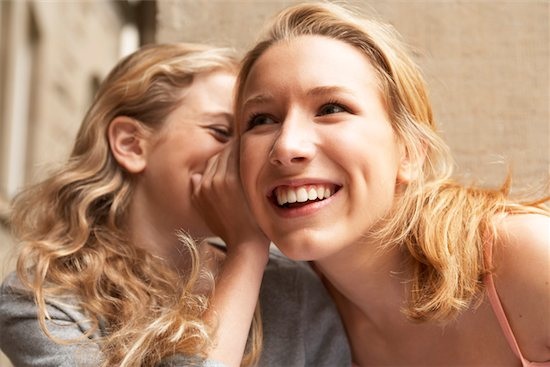 A story in The New York Times – Why Sisterly Chats Make People Happier – explores a recent study that found that adolescents who have a sister are less likely to report such feelings as “I am unhappy, sad or depressed” and “I feel like no one loves me.” But why would having a sister be more happy making than having a brother? The author, Deborah Tannen (also a professor of linguistics at Georgetown University who wrote a book about sisters: You Were Always Mom’s Favorite! Sisters in Conversation Throughout Their Lives), posits that it isn’t simply a matter of differing communication styles and women being more likely to express their feelings.

Instead, Tannen suggest that another element is at play: “I interviewed more than 100 women about their sisters, but if they also had brothers, I asked them to compare. Most said they talked to their sisters more often, at greater length and, yes, about more personal topics. This often meant that they felt closer to their sisters, but not always.” Tannen believes that the fact that sisters are more likely to talk – rather than what they talk about – in comparison to brothers is what makes their siblings happier. “If men, like women, talk more often to their sisters than to their brothers, that could explain why sisters make them happier,” she says.

Tannen uses the example of Colleen who was very close to the unmarried sister who moved in with her and her husband. Every morning, after her husband had gotten out of bed to make coffee, Colleen’s sister would crawl into bed next to her and just gab away about anything and nothing. The fact that they were talking – and not just about feelings – was the key part. And, no doubt, it buoys your spirits when you really feel like someone is listening to you.

It may be that sisters are more likely to both talk and listen to their siblings, but, in my experience, the gender of a sibling isn’t necessarily relevant. I have a brother, older by six years, to whom I am extremely close, and he is one of very few people who can read the precise meaning of my eye roll across a dinner table. And I do spend hours on the phone with him, discussing everything from what we had for dinner the night before to the nuances of our family’s dynamic. What makes me happy is having someone who knows exactly where I come from, accepts everything about me, and believes my generally lovely family is nuts in all of the same ways. My brother is all the sister I’ll ever need.