The breast cancer magazine every woman should see

When Sylvia Soo was diagnosed with breast cancer at 25, she took to journaling. The result is the must-read Cancer Fabulous Diaries — part memoir, part practical handbook. 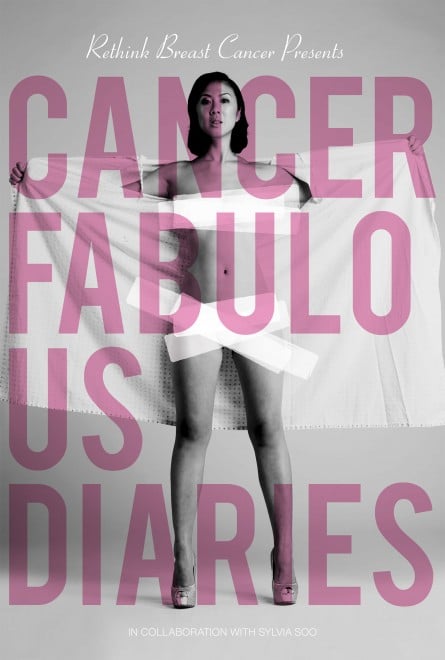 On March 26, 2009, a 25-year-old Sylvia Soo was driving with her dad when she got a call from her doctor. The results from her biopsy were in. Sylvia braced herself as she waited for the next three words that travelled through the receiver: “We found something.” Later that day, Sylvia wrote in her journal:

I feel like I’ve just been slammed into a brick wall. I can’t talk to the doctor. I ask her to call me back. My heart beats faster but I appear to be calm. I say nothing to my dad and we continue the drive to my brother’s house. A thousand thoughts race through my mind.

Sylvia documented her entire breast cancer journey through journaling, photos and videos, and began to share her experiences on a private Facebook page, and eventually, on her blog, Cancer Fabulous.

Now, in collaboration with Rethink Breast Cancer, a hip Canadian charity dedicated to bringing resources, support, funding and community to the “under-40 crowd,” Sylvia’s diaries have been compiled into a stunning publication: Cancer Fabulous Diaries. The 100-page “zine” reads like an trendy lifestyle magazine, with beautiful type and imagery laid out on cardstock-style paper. Interspersed between Sylvia’s intimate diary entries are Q&As with healthcare professionals (including Sylvia’s own surgeon, Dr. Kelly Dabbs), tips and tricks on things like chemo prep, questions to ask your treatment team and eight Survivor Stories, which provide a glimpse into the breast cancer experiences of other young women. In addition to being available online, hard copies will be in patient libraries and waiting rooms across the country. 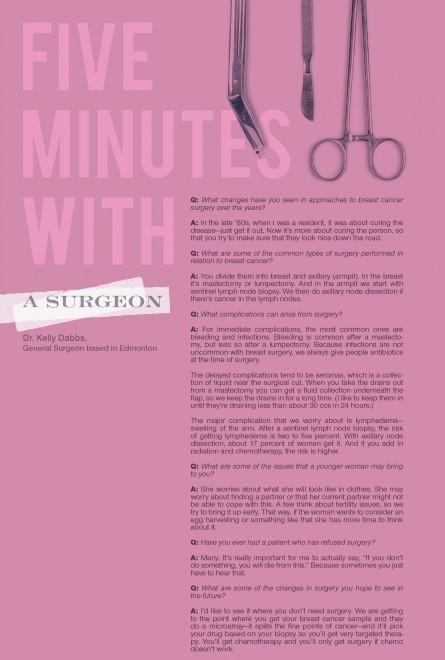 “I see it as part inspirational memoir, part practical handbook,” says MJ DeCoteau, founder and executive director of Rethink Breast Cancer. “Our philosophy is to make breast cancer information relevant to young women. Why should a breast cancer pamphlet have to look ugly and drab? We met Sylvia shortly after she was diagnosed and loved what she was doing in terms of sharing her really personal, really raw experience. We knew there had to be a way to bring it all together and create a new resource for young women.”

For MJ and Rethink Breast Cancer, it’s all about rallying around the more than 1,000 women between the ages of 20-39 that are diagnosed with breast cancer each year, to make sure they feel supported and represented. This month they’ve also launched a new YouTube channel, BoobTube: The Digital Breast Cancer Channel for Young Women, where they’re releasing stylish, well-produced and informative content for breast cancer patients, by breast cancer survivors.

“When a woman like Sylvia is diagnosed at 25 she is going to a support group where there are women a generation or two older than her, and then on top of that you’re bald and you’ve lost body parts, and these young women can suddenly feel like older women. We don’t want that. Yes, your life does go through a radical change and there’s a lot of uncertainty, but the women we work with still like the same music, food, fashion; they’re still the same person they were before cancer in many ways. They don’t necessarily want to be shoved into a new breast cancer box.”

Sylvia’s own journey and access to resources were a part of what inspired the zine. When she was diagnosed, her surgeon put her in touch with another woman her age in her hometown of Edmonton, but other than that one connection and a breast cancer support group where it was assumed she was there to support her mother, there wasn’t much in the way of a community that reflected what she was going through at the age of  25. “It’s very isolating, and the information is geared towards an older population, ” she says. Some of the questions she had, specifically about how her cancer would affect her ability to reproduce, were difficult to find answers to. “All of the questions and tips and tricks we have in the zine are exactly what I thought as I was going through each step,” says Sylvia. “Hopefully it will help somebody else along the way.” 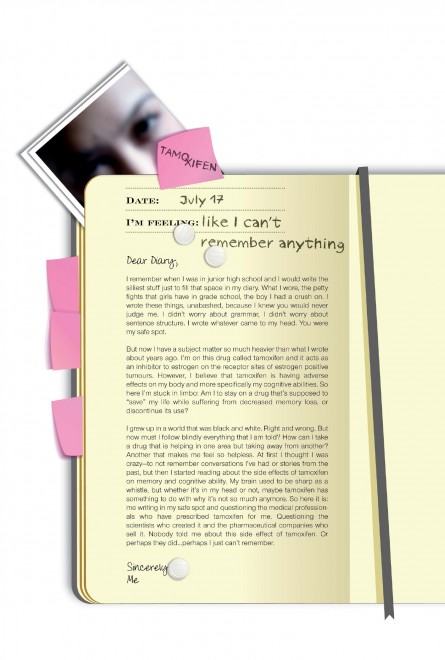 The zine takes the reader on a journey from diagnosis all the way to post-treatment and recovery, with every step covered in between, from surgery and chemo to reconstruction and body image. The last chapter, “Moving On,” was especially important for Sylvia to include. “When you’re done treatment the misconception is that everything’s ok, that everything’s going to go back to normal. But there’s no going back to normal. It’s more about finding a new normal, “ says Sylvia. “I think a lot of breast cancer patients and survivors feel a little abandoned after their treatment. It’s like, what do I do now?”

Even once you come to the end of the zine, you can keep up with Sylvia on her website, where she continues to share. She had a reoccurrence last year, which isn’t covered in the zine, but she documented it on her site.  How is she now? “I’ve been given a clean bill of health, but if there are any updates you’ll find them on cancerfabulous.com.”