7 health benefits of salmon to improve your vitality

From heart health to brain development find out why you should up your salmon intake this summer. 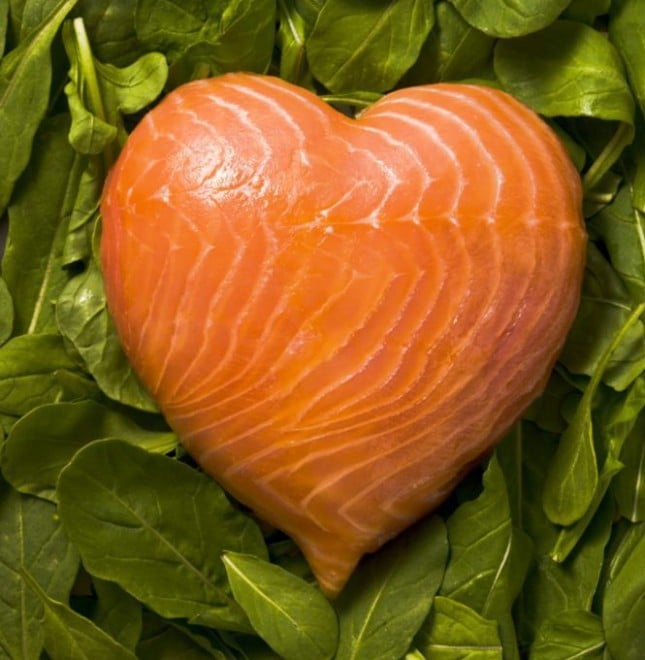 This post was originally published in June 2014 and has been updated.

Canadians are wild about their salmon. In fact, Canada is one of the largest salmon exporters in the world! Wild salmon is loaded with protein and the two blockbuster omega 3s — DHA and EPA — that helps with brain, nerve and eye development. As the body can’t make omega-3 fatty acids, the best way to obtain them is through the food we eat.

Certain types of salmon are sustainable. The non-profit organization Sea Choice states that a sustainable source is, “A species whose biology is capable of withstanding fishing pressure, where the status of the stock is well understood, and where the fishing methods do not adversely impact other species or habitat.” I recommend eating it at least twice a week, but be sure you’re getting it from a sustainable source. There are so many questions around what kind of fish is best, read on for some clarity:

Q: Should I be concerned about the mercury in fish?
A: Large fish that consume smaller fish have higher levels of mercury because it accumulates inside them, this process is called biomagnification. Species such as shark, tuna, tilefish (like golden snapper or golden bass) and swordfish are best to be avoided completely because of this. Salmon are very low in mercury as they’re small in size and eat plants.

Q: Should I avoid farmed salmon?
A:  Atlantic salmon you see in grocery stores are likely farmed as the wild Atlantic salmon population is struggling. Fish farmers often feed their stock soya- and corn-based food, which isn’t all that nutritious for the fish and can result is lower amounts of omega 3 for the consumer. Soya and corn are also heavily genetically modified and laden with pesticides that can affect the fish. To avoid the issues that come with overcrowding, fungicides are also used to treat the water the fish live in.

It’s also common for some salmon farms to use colour to make the farmed pale fish look pink, the way wild salmon would look naturally. The dye, canthaxanthin, is present in the fish food and is transferred into the flesh, yet many consumers are unaware of this as supermarkets sell this coloured fish without listing it on the label.

Your best bet is to consume wild or organically farmed fish to avoid any additional pesticides, fungicides and excessive omega-6 consumption (which leads to inflammation) found in conventionally farmed fish.

Q: How do vegetarian sources of omega-3 compare to fish sources?
A: Vegetarian sources of omega-3 fatty acids such as flaxseed, flaxseed oil, walnuts, chia and hemp seeds are great, but it’s easier for the body to utilize the omega 3s from fish sources. Plant sources need to undergo an enzymatic conversion in the body that requires co-factors such as vitamin B6, zinc and magnesium. If you’re low in nutrients, the conversion may not happen, increasing your risk for inflammatory conditions. So, if possible, try and stick with the real purest source to gain the highest amount of health benefits.

1. Eating salmon is beneficial in the treatment of osteoarthritis and other inflammatory joint conditions. Salmon contains small proteins called bioactive peptides. One in particular, called calcitonin, has been shown to increase, regulate and stabilize collagen synthesis in human osteoarthritic cartilage. This salmon-found protein also improves bone density and strength.

2. Eating salmon reduces risk of depression. The brain is 60 percent fat and most of that is the omega-3 fatty acid DHA, which is critical it is for brain function and a healthy nervous system. Eating salmon regularly has been associated with reducing the risk and incidence of depression, hostility in young adults and cognitive decline in the elderly.

3. Eating salmon increases your cardiovascular health. As noted, salmon contains high levels of the omega-3 fats, EPA and DHA. These fats are responsible for many cardiovascular benefits such as reducing inflammation. When eaten two to three times per week, salmon can protect you from problems such as heart attack, stroke, arrhythmia, high blood pressure and high triglycerides.

4. Salmon helps build children’s brains. Eating salmon while pregnant and nursing can boost learning capability and academic performance in children. Salmon contains high levels of DHA (decosahexaenoic acid) which is the main structural fatty acid in the central nervous system and retina. Feeding salmon to preschool children also aids in the prevention of ADHD and can even boost academic performance.

5. Salmon’s an excellent source of vitamin D. Sufficient vitamin D is crucial to maintaining optimal health. A deficiency of this essential vitamin has been linked to an increased risk of cancer, cardiovascular disease, multiple sclerosis, rheumatoid arthritis and type-1 diabetes. One can of salmon, for example, contains a day’s worth of vitamin D.

6. Salmon brings out the best in fresh greens. The proteins, B vitamins and omega 3 fatty acids in salmon complement the antioxidants and vitamin C in greens such as spinach and kale.

7. It can help prevent cell damage. Along with its many vitamins and high protein content, salmon is an excellent source of selenium, a mineral is that works as an antioxidant in the body. It is associated with decreased risk of joint inflammation, keeps the immune system and thyroid working well, and can help to keep tissues healthy by preventing cell damage.

Try this delicious summer recipe to ensure you’re getting your intake of omega 3s. 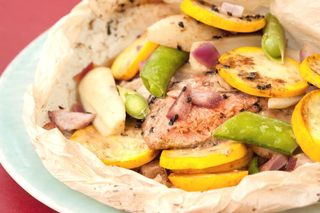 2. Preheat oven to 375 F (190 C). Cut 4-24 in (60 cm) pieces of parchment paper and fold in half crosswise. Draw a half moon, and then cut out the shape to make a full circle. Open it up and place salmon on one side fairly close to the crease. Top salmon with vegetables and drizzle leftover marinade on top.

3. Starting at the top, seal the packet by folding edges together in a series of small, tight folds. Twist the tip of the packet and tuck it underneath. Place packets on baking sheet and cook for 15 minutes.

4. Allow packets to rest for 5 minutes before carefully opening.

Julie Daniluk hosts Healthy Gourmet, a reality cooking show that highlights the ongoing battle between taste and nutrition. Her book, Meals That Heal Inflammation helps people enjoy allergy-free foods that taste great and assist the body in the healing process.