Five reasons radish is great for detoxing the liver

See the five healthiest reasons to add radishes to your diet and get a yummy radish recipe too! 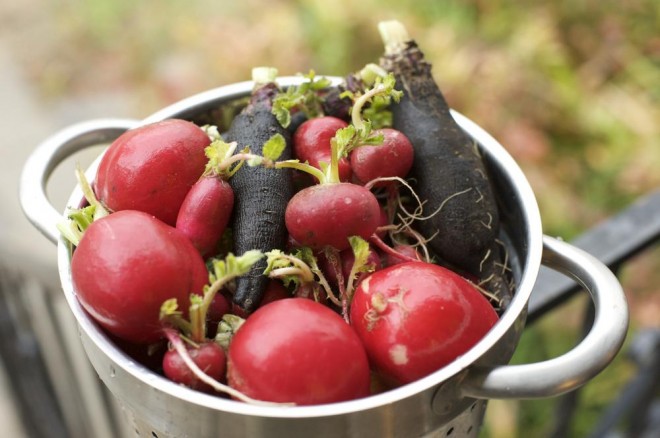 I used to hate radishes until I discovered the ones by the friendly farmers Vicki Emlaw and Tim Noxon. It seems that many radishes are only as good as the farmer who grows them. Commercially grown ones can have a musty/woody flavour in the centre, but the organic beauties that I had the chance to enjoy from the farmers’ market this week were as sweet, crunchy and juicy as a crisp local apple.

While at the market, I also picked up some black radishes because they’re even healthier. Keep in mind they pack a punch similar to horseradish so it’s a good idea to use them in smaller amounts to keep a dish’s flavours balanced.

Five reasons why you should fall in love with radishes
1. A radish’s red colour comes from the red plant pigment, anthocyanin. This pigment doesn’t just give these veggies a pretty colour, but also acts as a powerful antioxidant in the body that prevents cardiovascular disease by protecting our cells from damage.

2. Radishes are part of the cruciferous family that provides a unique molecule called indol-3-carbinol (I3C). I3C reduces inflammatory intermediates in the blood. These intermediates are what signal increased blood flow to an injured area, causing inflammatory symptoms.

3. Radishes are an excellent source of potassium. This mineral supports proper fluid balance in the body by acting as a diuretic in opposition to sodium. The symptoms of a sodium/potassium imbalance include swollen ankles or fingers, extreme thirst and irregular heartbeat to name a few. A long-term fluid imbalance like this can contribute to high blood pressure.

4. Radishes contain a special compound known as RsPHGPx that acts as an antioxidant in the phase 2 liver detoxification pathways. This detox pathway disarms harmful chemicals such as pain relievers, nicotine, insecticides and other cancer-causing molecules.

5. It turns out that black radishes do the best job of assisting the liver with its job of detoxification. In The Way of Ayurvedic Herbs, Karta Purkh Sing Khalsa and Michael Tierra explain the traditional universal use of radishes to stimulate bile synthesis in the liver. Bile carries toxins into the gallbladder then on into the small intestine so they can be excreted.

Pressed radish salad recipe
This salad is almost like making a fresh pickle. Pressing veggies with some vinegar and salt has the same effect as cooking. It makes the dish more digestible yet preserves the active living enzymes in the plants.

2. Place another bowl over the vegetables and press down. Weigh the bowl down with a jug of water or other heavy object.

4. Top with chopped basil and Gomasio

Nutritionist Julie Daniluk hosts the Healthy Gourmet, a reality cooking show that looks at the ongoing battle between taste and nutrition. Her first book, Meals That Heal Inflammation, advises on allergy-free foods that both taste great and assist the body in the healing process.