How to lose those last five pounds

From counting calories to avoiding foods that will sabotage your diet, we've got the top expert tips for losing those last stubborn pounds. 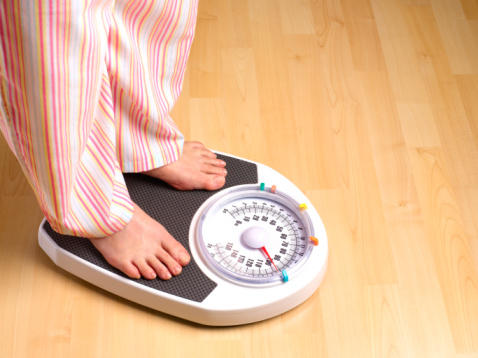 1. Do the math
“There’s no magical pill for getting down to your ideal weight,” says Barbie Casselman, a Toronto-based nutritionist known for whittling the waists of high-powered executives. It all comes down to math. “It’s kind of simple — calories in versus calories out,” she says. If you decrease your caloric intake by 500 calories a day, by the end of the week you would have a deficit of 3,500 calories or one pound of fat, she explains. And when you gain 10 pounds in a year it could be from something as simple as eating 100 extra calories a day. Grab your calculator and start crunching the numbers (instead of that mid-afternoon bag of potato chips).

2. Fruitless calorie-cutting
You don’t have to be noshing on cookies and candy every day to pack on the pounds, says Casselman. Seemingly healthy fare like fruits and juices are full of sugar and calories even though they also have vitamins. An 8 oz glass of orange juice has 120 calories — or six teaspoons of sugar— the equivalent to a can of pop and your body doesn’t know the difference between them, Casselman explains. Ditch the juice and eat high-fibre fruits in moderation, she advises.

3. Go green
Salad is the ultimate go-to food for dieting fiends. But just because it has lettuce, does not mean it’s low-calorie, says Casselman. Salads are often loaded with not-so-innocent add-ons like cranberries, walnuts, and bacon bits that pack more calories than if you’d opted for a burger. Salad dressing is another diet killer, says Casselman. Two tablespoons of olive oil are equivalent in calories to eating two pieces of bread. Eat a green salad, says Casselman, get the dressing on the side and have it with soup or a piece of bread. Make sure to include a low-fat source of protein in each meal — it will digest slowly, keeping you full longer.

4. Don’t drink up
On your way to the office you grab a latté. To unwind from work you sip on a glass of wine. And there you have it – 600 hidden calories. “Calories consumed in liquid are the most underestimated,” says Casselman. It doesn’t mean you can’t enjoy a relaxing beverage but stick with an herbal tea or wine spritzer to nix calories.

5. Write it down and calm down
Keep a food diary, says Casselman. By writing down everything you eat you can catch a pattern in your food consumption. And don’t forget to take a breather. If you’ve been on a hard-core weight-loss regimen and you’re almost down to your ideal weight reassess whether it’s necessary to drop those last five pounds. You’ve already gotten the health benefits so the rest is just aesthetics, says Casselman. Give your body the break it needs, watch your diet through a food journal and those last five pounds will come off in no time.

Follow the jump for more great tips on how to drop unwanted pounds.