How to juice the smart way: Health experts on the benefits of juicing

Whether it's an early-morning fruit-juice fix or pulverized carrots and kale for lunch, many of us are taking meals in liquid form. But do the health claims justify giving juicing a whirl? 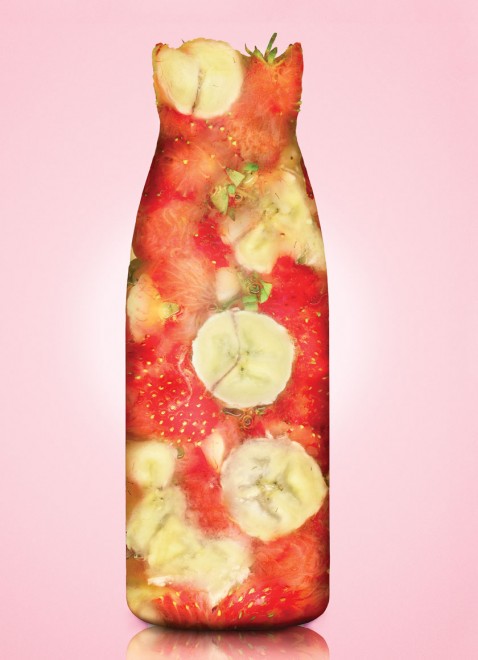 You can’t walk down the street these days without seeing someone sipping juice. From trendsetting celebs like Gwyneth, Jennifer and Beyoncé to health gurus like Dr. Oz and Oprah, it seems everyone is enjoying their salads through a straw. And while they’re slugging back their five a day in 500 mL or less, they’re also making some pretty big claims about the benefits.

Juicing, they say, can help you turn back the clock, shed unwanted pounds fast and even fight a whole host of diseases. And there’s a growing industry ($5 billion and change) ready to quench our collective thirst for health in a glass. Chances are a hip juice bar has already staked out territory in your neighbourhood.

But should we be toasting this hot new trend just yet? Chatelaine spoke to leading health experts and juicing proponents to put the claims to the test.

Jonesing for juiceE
Everyone knows someone who’s tried a juice cleanse. Usually it’s a gal pal trying to make up for a weekend of overindulgence with a quick juice detox. But then there’s Joe Cross. In 2007 the Australian businessman found himself 100 pounds overweight, pre-diabetic and heading toward a heart attack. “I was spiralling out of control,” he says. “Instead of taking ownership of my health, I was outsourcing it to other people, depending on doctors and medications to get through each day.”

At his heaviest, Joe weighed 310 pounds. After years of failed yo-yo dieting, he decided enough was enough. “I knew that I needed to eat more fruit and vegetables, and although I liked fruit, vegetables have never been a strong point of mine. But I thought if I juiced them, I might like them more.”

So Joe embarked on what would become an enlightening journey into the world of juicing, subsisting on nothing but liquefied fruits and vegetables for 60 days straight. “I wanted to trick my body into survival mode,” he says. He knew it wouldn’t be easy, but he believed that in order to overhaul his diet, he needed to shock his system with nothing but nutrient-dense juices.

He consulted his doctor and designed a plan that would make juicing the mainstay of his diet. Joe started each day with one big glass of juice (his favourite: watermelon, pineapple and ginger), and every snack and meal thereafter was also taken in liquid form.

Was it easy? “Absolutely not,” says Joe. The highs and lows of his 60-day juice-fast were documented in the film Fat, Sick & Nearly Dead. For the first few days, Joe felt exhausted, moody and light-headed. Later, he struggled with intense cravings and boredom, missing the sensation of chewing food.

“I remember sitting in a restaurant parking lot at one point during filming while the documentary crew ate dinner inside. I felt miserable because I couldn’t join in,” says Joe. “Juicing takes willpower. But I’ve found if you continue to feed your body the right kind of energy, it’s amazing how quickly your cravings will change.”

Behind the hype
Although Joe’s approach to juicing was extreme, he did get the results he’d hoped for, dropping nearly 100 pounds. He was also able to stop taking the medications he once thought he could never live without.

That said, doctors, dietitians and nutritionists are divided as to whether juice cleanses have all the detoxing, diet-transforming and disease-fighting properties their advocates so fervently profess. From a medical standpoint, doctors say our bodies (specifically the kidneys and liver) are equipped to naturally remove toxins from our systems. “When juicing proponents say their juices ‘detox’ the body, I wonder what toxins they’re talking about,” says Dr. Donald Hensrud, a nutrition specialist at the Mayo Clinic. “What exactly are we meant to be cleaning?”

If there are any benefits to juicing (Hensrud says there currently isn’t any supporting research), he believes they may be only temporary: “You may feel lighter if you reduce the calories you take in, and even mentally better too, but those are short-term effects. I’m not aware of any long-term benefits.”

One thing most experts can agree on is that juicing in moderation (think a glass a day as opposed to a meal replacement) can supplement an already decent diet or help jump-start a range of healthy behaviours, such as more mindful eating in general. When it comes to overall diet, Dr. Michael Roizen, chair of the Wellness Institute at the Cleveland Clinic, does prefer that his patients eat a well-balanced diet with plenty of fruits and vegetables, skin and all. “There’s nothing wrong with juicing in moderation, but it’s best to eat most of your fruits and vegetables whole,” he says. “Tossing fruits and veggies into a juicer means you’re removing a lot of the fibre. The bottom line? It’s fine to occasionally drink your fruits and veggies as long as you eat them often too.”

Whole or pulverized, fruits and vegetables are essential to a healthy diet, so if it takes a glass of juice to help you get more of them, then that’s not entirely a bad thing, says Mary Bamford, a Toronto-based dietitian. Juicing is also an easy way to broaden your exposure to different fruits and vegetables. We can all benefit from adding a few more colours to our plates (or glasses), says Bamford. “I encourage everyone to play with different combinations.” She suggests experimenting with ingredients, like ginger for energy, or antioxidant-rich beets, which are also high in folate, to help protect your heart.

Mastering the “cleanse”
Although Joe stuck to his juice fast for 60 days, he’s back to eating whole foods and now treats juices as a daily complement to his new healthy lifestyle.

“I never thought I could get my body excited about drinking juices or eating massive salads,” he says. “But a strong commitment to eating well changed that for me.”

Now Joe gets enough fruits and vegetables, but he still gives in to his cravings from time to time. “I’ve found if you can up your intake of fruit and veggies by 35, 40 or even 50 percent of your daily calories, that still leaves plenty of room for a chocolate milkshake, which is always fun,” he says.

We’ll toast to that!

Amy, food editor
A juice cleanse struck me as a good way to give my body a break from the everyday (coffee, cookies, chips), so I signed up for a local juice delivery service. Although my jeans did feel looser, my love affair with carrot-ginger juice quickly waned. So who wants to go for coffee?

Lora, assistant editor
I just couldn’t do it. I couldn’t convince myself that a three-day cleanse would overhaul my diet. I do, however, love fresh juice. But could I live on it and nothing else? No. I love food too much! For me, it’s all about balance, and juicing is a great complement to an already (mostly) healthy diet.

FILED UNDER: cleanse How to do everything better juice juicing