A little help from my friends: My triathlon challenge

In a month and a half, when I find myself trembling at the starting line of my first triathlon, I'll be on my own. But I won't be alone. All of the friends who have helped me during training will be swimming, cycling, and running alongside, too, invisible to everyone but me. 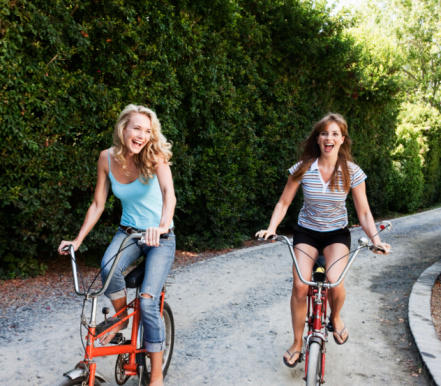 In a month and a half, when I find myself trembling at the starting line of my first triathlon, I’ll be on my own. But I won’t be alone. All of the friends who have helped me during training will be swimming, cycling, and running alongside, too, invisible to everyone but me.

At first, when the idea of completing a triathlon presented itself as a real goal, I was hesitant to tell people. The idea seemed presumptuous in that “Who does she think she is?” kind of way. Besides, I knew who I wasn’t: I wasn’t an athlete, and my life’s trajectory had given little indication that I ever would be.

But my husband wasn’t the least bit hesitant. He believed in me, and was excited to share the news. My initial response was deep embarrassment: “Stop telling people! What if it turns out I can’t even do it?” But the funny thing was, friends didn’t respond with scepticism or critique, but with genuine interest. No one questioned my sanity, for which I remain truly appreciative. And some even had expertise to offer.

A mom from my neighbourhood playgroup had completed an Ironman triathlon before having kids — I never knew! She quickly became my go-to source for dumb questions. Another acquaintance races for a cycling team — again, this was news to me; I’d known him as a quiet librarian. He helped tinker with the fit of my bicycle, and was a patient sounding board when I decided to upgrade. And when my massage therapist turned out to be a former triathlete, and offered to loan me her wetsuit for the race, it seemed almost too good to be true. (She tempered the loan with hair-raising tales about fighting for space in the water, and aggressive men trying to swim over top of her on race day. “But you’ll be fine! Don’t worry! Swim wide!”).

Fast-forward to now: I’ve got a running friend, a swimming friend, and some spin and cycling friends. What began as a seemingly solitary and individual project has become something of a team effort. Our goals might not be the same — I’m the only one training for a triathlon — but the web of support has been mutually motivating. Knowing you’re meeting someone is a good reason to crawl out of bed, and there have been many chilly or rainy or snowy mornings when I needed a good reason.

For those you mulling the idea of training for a race, too, I would never advise against seeking out expert help. Finding a trainer would simplify the process, and offer motivation. But I’d also encourage you talk to the people you already know. Get brave, and go public with your dream, no matter how far-fetched you think it sounds.

You might surprised by the response you get. It’s your journey, but you don’t have to go it alone.