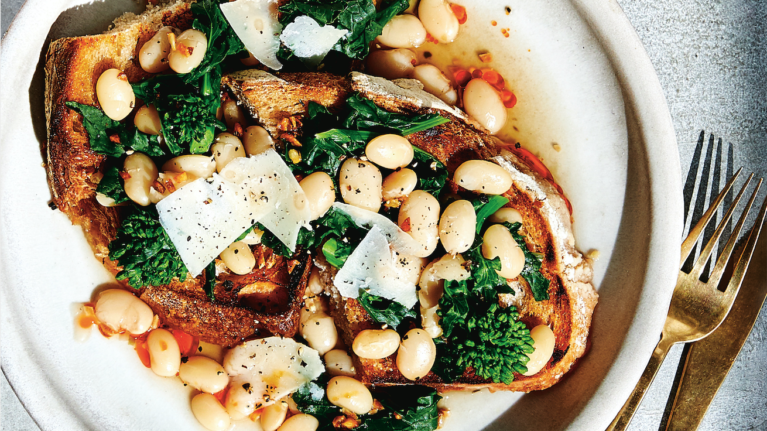 When Washington Post food editor Joe Yonan first set out to write a cookbook about beans, he didn’t think he’d be writing about what ended up becoming the top pantry staple during a global pandemic. Within a month of its publication earlier this year, nearly every type of legume, from dried to canned, was picked off the shelves. Specialty growers had a hard time keeping their heirloom beans in stock. It’s likely more than a few panicked shoppers at the time ended up buying more beans than they knew what to do with—or at least thought they did.

“People are even that much more anxious, or eager for recipes that demonstrate the variety of things you can do with beans,” says Yonan. His book, Cool Beans, more than delivers on this front. In the last two months I’ve been cooking from it, I’ve picked up shortcuts on dried bean preparation (you don’t always have to soak), delicious ways to reuse the cooking liquid from beans in new dishes (the broth from black beans makes an incredible black rice), and ways to turn beans into something other than cold-weather soups or stews. From pizza to savoury galettes and even chocolate mousse, this book has delicious preparations for plenty of light and summery dishes in ways that don’t feel forced. One of my favourites, though, is solidly in stew territory: ewa riro, a Nigerian dish of black-eyed peas cooked with blended tomatoes, red pepper and hot chilies.

I spoke to Yonan about publishing this book at the start of quarantine life, which beans you’re better off buying canned, and a special ingredient that helps with beans’ more…musical qualities.

You spend some time in the introduction talking about the “fusty” reputation beans once had in North America. What do you think is behind it?

Up until fairly recently—and I’ll take the pandemic out of the equation for a minute—people have really associated beans with something obligatory, an old-fashioned way of thinking about health food and plant-based eating. Memories of three-bean chilies from their past and the dusty vegetarian cafes.

You note that they were also seen as a budget meal.

People just thought sure, maybe they’re a good way to stretch a dollar if you have to. But certainly as soon as you could afford to, you’d eat more interesting things. As I write in the book, I think that in America and media and food coverage, we often pay attention to, or have historically, looked to the cooking of higher end, or the aspirational. And I think that’s been changing a lot with more influence of immigrant cuisines on America. And our food culture is so affected by immigrants, and every immigrant community has these recipes that they love that use beans. I don’t think Italians, who are among the top bean eaters in the world, think of them as a poverty food.

Lately people have started seeing in restaurants, higher-end restaurants, creative uses in beans and beans treated like an important and even interesting ingredient. And I don’t think that has been the case for quite a while.

And then, with the growing interest in plant-based cooking and eating, it becomes clear that beans are a really great way to eat less meat—and still eat interesting food. We started having this bean moment before the pandemic. The Instant Pot proved you could think about dried beans on any given weeknight rather than plan it beforehand.

There are a lot of techniques in this book people wouldn’t think twice about if applied to meat: salt brines, marinades, etc.

I think that’s true with so many vegetables. And beans are no exception. The most sophisticated plant-based cooks and chefs understand that learning particular techniques for particular vegetables can really help you and make really delicious food. That is starting to happen more.

It’s so true that people who need their pork belly slow-cooked for 36 hours but have no idea how to cook a mushroom or a bean or a carrot in any way other than roasted with olive oil and pepper—which is totally fine. People are realizing that all sorts of foods can benefit from particular techniques.

But having said that, when you get dried beans, and get them from specialty stores, they really provide so much flavour.

The broth you get from cooking dried beans: what’s so special about it?

It really is my favorite thing about cooking beans from dried. Or maybe the bigger one is that you have access to varieties you just can’t get canned—but the close second is that liquid gold. It carries all of this flavour, and you can use it to store beans in the fridge or freezer. And it protects them—if I drain beans and put them in an airtight container, they’d still start to go bad a lot sooner than if they’re submerged in their cooking liquid.

The liquid also has body. Beans are starchy, so it can add a silkiness to sauces and soups and stews, and behave like pasta water in bringing sauces together. So in that way it’s also like a stock. A meat stock has body in a way that vegetable stock doesn’t—but beans do.

Are there certain types of beans that are simply not worth getting canned?

I’m not a fan of canned lentils. I find the texture too mushy. Otherwise, most canned beans I really like. And canned beans are so convenient! They’re right up there with canned tomatoes in terms of quality and usefulness. My favourite is the chickpea. I like using that liquid from the can in things, and because chickpeas really hold their shape well when canned.

There’s one ingredient I didn’t expect to see in this book: kombu [dried kelp, often found in East Asian grocery stores]. It’s in a lot of your recipes! Why?

I first got the idea from one of my sisters, who’s a former hippie and cooked according to macrobiotic principles in the seventies. So I did it every now and then. [Editor’s note: to use it, add a 10 cm strip of kombu to beans while they’re cooking.] I always liked it, but I wasn’t really sure what was going on. It turns out that a few things are happening: kombu has been shown to soften the beans as much as soaking does. There’s something about the exchange of minerals there that helps the beans get soft, and it apparently helps with the flatulence issue. There’s an enzyme in kombu [alpha-galactosidase] that we lack that causes us to be able to not digest the oligosaccharides.