My nana’s love and care often came in the form of eight-ounce jars of chutney. Since we’ve stopped speaking, I’ve had to learn to make them myself. 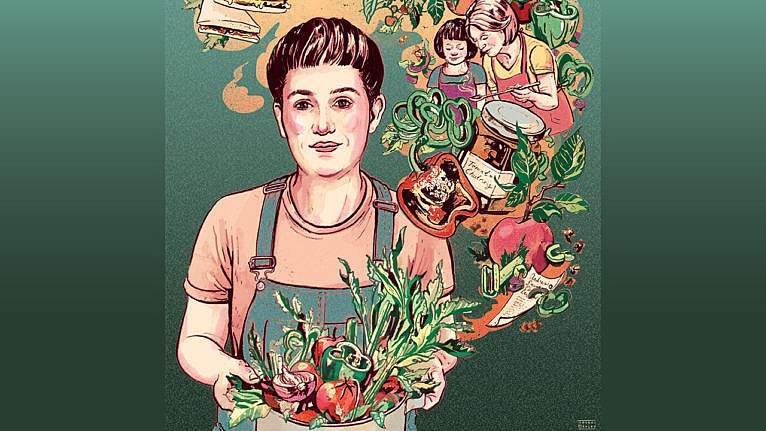 Last September, I harvested two green bell peppers and a bunch of celery—twisting it at the base so that its leftover roots could feed the soil. Then I gathered Roma tomatoes, gala apples, red bell peppers and onions from the grocery store and made my nana’s chutney recipe for the first time ever, by myself.

My nana is in her 90s and lives in a retirement home in small-town Ontario. When my now-toddler was born, Nana still lived in the house where my brother and I often spent summers with her and my granddad. My childhood home was chaotic: My parents fought, my mother drank and I rarely felt at ease. At my grandparents’, my granddad gardened, made compost and taught us how to rewire a lamp. My nana taught us how to play a card game called clock solitaire, gave us old hardcover Nancy Drews to read in the sunroom and turned produce my granddad harvested into dinner and preserves.

My nana’s attention made me feel loved—and that attention often crystallized in the form of eight-ounce jars of chutney, made and set aside especially for me. My favourite way to eat it was on cheese-and-chutney sandwiches (cut on a diagonal), the sweet, tart, slightly crunchy red chutney contrasting with the crumbly, pungent orange cheddar.

When I was 26, my mother disowned me. She’d stumbled across an essay I’d written about our strained relationship, one I’d never meant for her to see, and, after this, my relationships with the rest of my maternal family became tenser and sadder.

When I became a parent, my nana didn’t answer my calls. I found out she didn’t want to see the baby unless I rekindled a relationship with my mother, to whom I hadn’t spoken for years. Perhaps she felt it would be a betrayal to meet my child if my mother most likely never would—but the silence felt like a betrayal to me, too. Like my own belonging to the family was conditional and not as primary as my mother’s. Like I would need to fend for myself again, the way I had as a child, fearing my mother’s alcoholism and anger and her desire, above all, to keep up appearances.

My nana’s chutney recipe calls for 24 ripe tomatoes, six apples, one bunch of celery, three medium onions, two green peppers, two red peppers, sugar, vinegar, salt, mustard seeds, cloves and ginger. The tomatoes must be skinned after a boiling-water bath, and everything is chopped finely. The tomatoes, onions and celery sit in a colander overnight to drain off excess water. The next day, when everything is in the pot and begins to warm, the house fills with the chutney’s smell—a smell that, until last fall, I hadn’t experienced in years. It’s a smell I can identify, now that I’m an adult, as the result of the recipe’s unique combination of green pepper, tomatoes and cloves.

The recipe I have is in my nana’s hand. She wrote a letter to go alongside it, sent several years before the maternal side of the family stopped talking to me. I can’t even remember what city I was living in at the time. Guelph? Vancouver? Montreal? Her letter says I should call if I have any questions. And the recipe bears my name: Andrea’s Favourite Tomato Chutney.

After the chutney has cooled, I spoon some onto a piece of cheddar. It is the taste of being in my grandparents’ kitchen at lunchtime. It is the clock ticking, the radio turned down but still broadcasting the news. It is the precise feeling of being safe, loved and cared for. My toddler tries the chutney with cheese and crackers; she likes it, and I feel grateful to be able to share something of my nana with her.

Once, when I was nine, we visited my grandparents in Florida for Christmas. I remember getting into the car to go home and not being able to say goodbye because I was crying and didn’t want to leave. That temporary parting contained the kernel of the larger parting that, even as a child, I understood was to come, so I began to hoard time with them.

My granddad died more than a decade ago, when he was 87, of cancer. But I always felt my nana would live into her 90s, that she’d be alive alongside me when I was 35, or maybe even 40. I just never realized I could lose her earlier, in another way.

As the distance between us grew, I craved her chutney more fiercely. Until I found the recipe folded into the pages of an old book, I thought I’d never taste it again.

Having made it, I miss her more fiercely, too. I wish I could call her and tell her that I didn’t have all the right tools, so when I introduced my Mason jars into the canning bath, I ended up creating a geyser of boiling water. I’d also tell her that my chutney was a success: It tastes just like hers. And that I grew much of the produce myself, as my granddad used to. And that I love her, and I’m sorry, but not sorry enough to accept my mother’s abuse as a condition of belonging to the family. I’d tell her that it was her early love, in fact, that helped make me strong enough to say no.