How to make healthier versions of your favourite Thanksgiving dishes

Here's the skinny on which dishes you can indulge in without the guilt, and which to avoid. 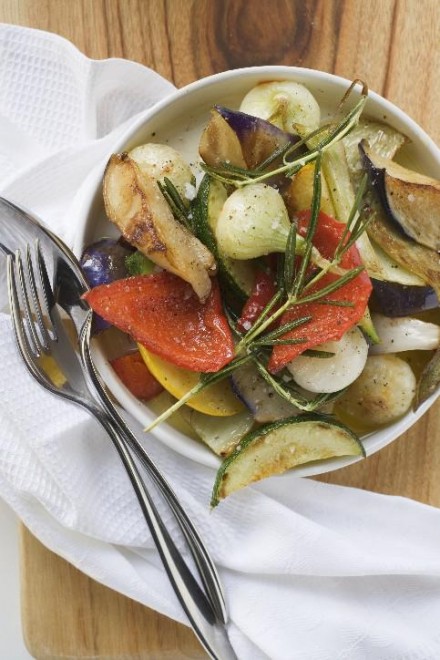 Turkey
Traditional dish: Turkey is a lean source of protein, chock full of iron and zinc. The skin, however, contains saturated fat, which clogs arteries and increases the risk of heart disease.

Stuffing
Traditional dish: “Sodium is the number one problem here,” warns Shauna Lindzon, a registered dietitian based in Toronto. Packaged stuffing seasoning mixes are loaded with salt. Additionally, stuffing is typically made with white bread, which is a low-fibre, low-nutrient choice.

Healthy alternative: Season with fresh herbs, such as thyme and basil, instead of using a packaged mix. Replace the white bread with a whole gain, such as bulgar or wheatberries, which are high in fibre, vitamin B and iron.

Roasted vegetables
Roasted fall vegetables, such as carrots, zucchini, winter pepper, eggplant, squash, parsnips, are an excellent dish in terms of nutrition. They are loaded with vitamins (C, A, E, K, etc.), folate and potassium. Brush the veggies with a little olive oil, which contains omega-3 fatty acids that help prevent heart disease and stroke. “Just use a pastry brush, so you’re not pouring lots of oil on top,” Chernoff says.

Mashed potatoes
Traditional dish: Potatoes are a great source of potassium and vitamin C, but mashed potatoes are often made with cream and butter, which increases the saturated fat. “Also, once you peel the potatoes, you lose a lot of the nutrition,” Lindzon says.

Healthy alternative: Swap in sweet potatoes for half of the white potatoes because they are a lot higher in beta-carotene, which your body turns into vitamin A. Wash the potatoes thoroughly but don’t peel them to retain the nutrients. Substitute milk for cream.

Pumpkin pie
Traditional dish: Pumpkin itself is high in vitamin A, but the other ingredients – sugar, cream, whipped cream and the crust (flour, sugar, butter) – can make it very unhealthy. “You’re basically having a ton of sugar with a bunch of saturated fat,” Chernoff says.

Healthy alternative: Make a fall-inspired fruit salad with fruits such as apples, kiwis, cantaloupes and cranberries. They’re packed with fibre, vitamin C and antioxidants, which protect our cells from free radicals. Then squeeze in some lemon and lime juice to add flavour and prevent browning.

1. Eat your regular breakfast, lunch and mid-afternoon snack and you will be less likely to overeat at the dinner party.

2. Wait 20 minutes before taking seconds. It takes 20 minutes for your brain to register that you’ve eaten. Then assess if you’re really hungry.

3. If there are appetizers, fill up on the water-based vegetable platter and avoid the dips.