I Stopped Wearing Makeup—And Started Seeing Beauty In My Scars

I appreciate what makeup does, but I really want to live in a world where even with scars, I can be seen as enough. 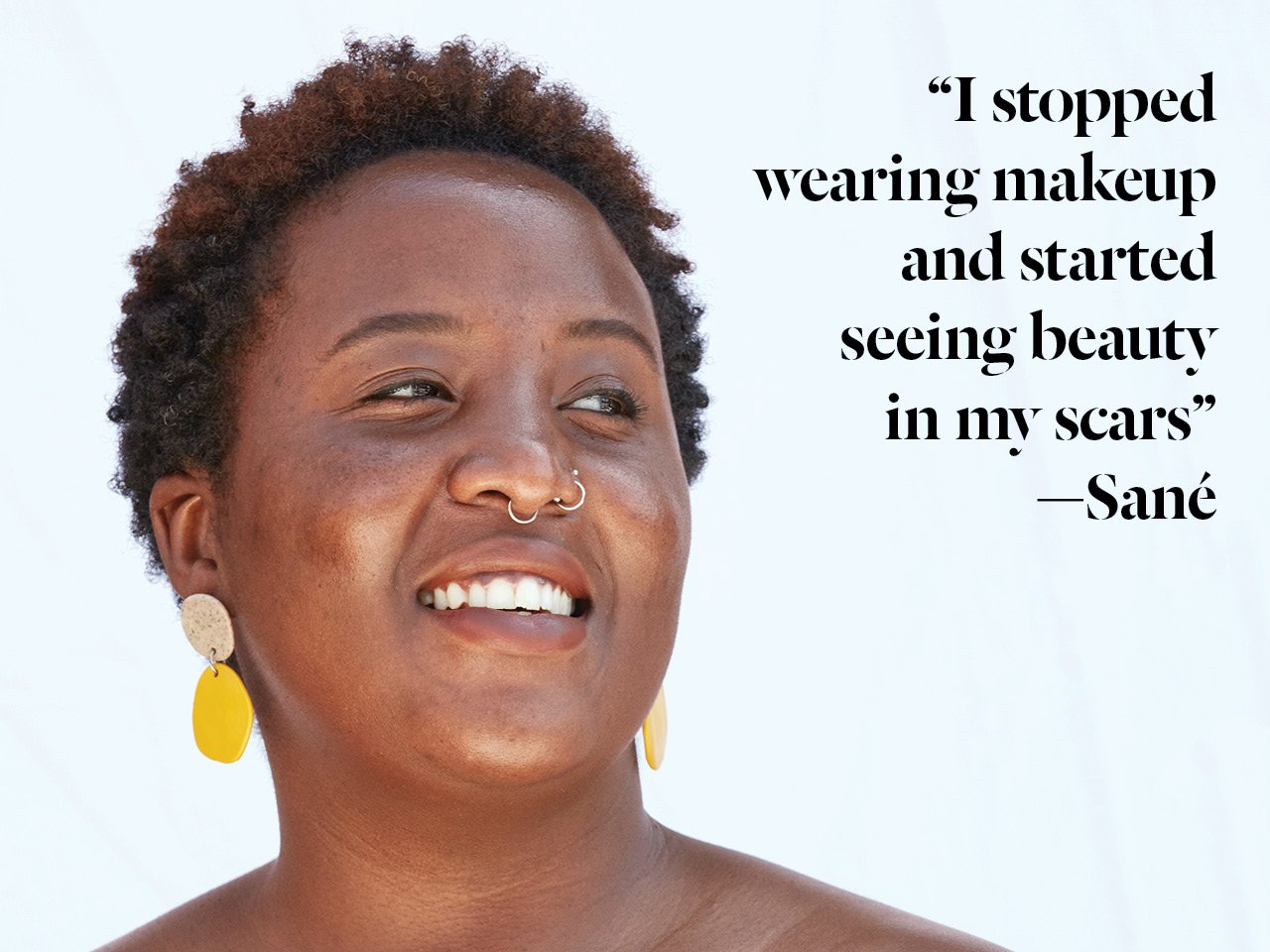 I started getting bad acne when I was a teenager, which led to scarring, and I continued to have acne into adulthood. It was expensive to treat, and being an immigrant (I moved to Canada from Zimbabwe for university), it always felt exorbitant to spend so much money on skincare when I could send it back home to my family.

Makeup had always been a way to make myself feel beautiful, and it was how I managed my insecurity around my scars. It also made things easier for me in certain environments. I’m a dark-skinned Black woman who is also fat, and my appearance is already policed in many public spaces. I often feel like I have to “have myself together” to be taken seriously when I’m in the world, if that makes sense. It seems like Black women are required to present in a certain way, and much of it is tied to notions of femininity and mainstream ideas of what is beautiful. Not to say that I’m only responding to external validation, but I’d be lying if I said the way I look doesn’t affect how I’m treated. The makeup made it easier, I felt, to deflect some of those dismissals.

Putting on my face became part of my day; but I realized that even on weekends, I was nervous about leaving the house without wearing makeup. I didn’t like how that felt. Overall, I think makeup is a beautiful form of self-expression for femme folks, and I don’t want to trivialize that. Eventually, though, it became something I didn’t enjoy anymore; it became a duty.

I stopped wearing makeup regularly about a year ago, because I wanted to be enough without it; to be able to move through the world even with my scars. I can’t remember the first time I actually went out without it, but what I can say is that, over time, I have felt more free than ever before.

When I’m in queer spaces, I have less fear of being policed about how I choose to present myself. But the shift to not wearing makeup was hard when it came to my job.

I work in health policy and I was worried that my colleagues might consider me to be less professional without makeup. But I kept going back to something Toni Morrison said, along the lines of “making yourself the centre and letting the world come to you.” Luckily, my anxieties didn’t become reality. And I know I am a professional, whether I conform to dominant ideals of beauty or not. I’ve found freedom in opening up that mental space for myself.

On a daily basis, I may still do my eyebrows and wear a bit of mascara, but that’s it. I really want to live in a world where even with scars, I can be seen as enough. I want to see beauty where the world tells us there is none. I appreciate what makeup does, but I want to reclaim some of that—to show that even for people with acne or acne scars, there’s beauty there.