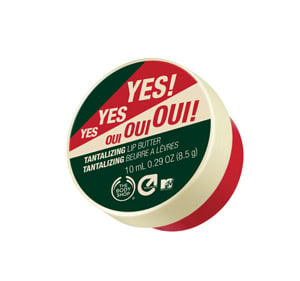 Tantalizing sounds a bit over the top, but it really smells amazing. And 100 percent of the money raised goes to the Staying Alive Foundation, a charity that empowers young people to protect themselves against HIV and AIDS. Nearly half of all new HIV/AIDS cases are among 15’24 year olds so they are launching this campaign with singer Kelly Rowlands to raise awareness among youth.

While some may criticize the practice of partnering charity with consumerism, I think if you are going to buy a lip balm or a T-shirt anyways it doesn’t hurt to contribute to a cause you also want to support. Plus, the lip butter is free of preservatives and includes great stuff like the exotic dragonfruit, organic beeswax and shea butter from Ghana sourced through The Body Shop’s Community Trade Program. So you’re supporting a community abroad at the same time.

Since 2007, MTV and The Body Shop have raised more than $1.6 million for the Staying Alive Foundation, providing grants for youth to influence their peer groups at a grass roots level.

There’s a special place in my heart for HIV/AIDS awareness and it doesn’t hurt that this lip butter feels and smells amazing.

Tantalizing Lip Butter, $8. In stores now.Check out this site to make a safe sex pledge and find out more about the campaign.www.yestosafesex.com