Splurge or save: The Union Jack

On the heels of the Queen’s Diamond Jubilee, we found it only fitting that we bring you a little British bling! 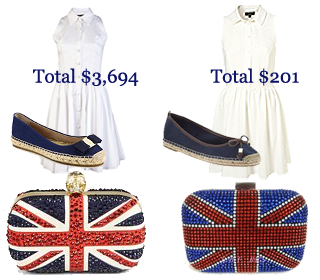 The trend: The Union Jack

It is no surprise that there has been a resurgence in the Union Jack of late. From home décor items to the fashion runways we are seeing this iconic symbol pop up everywhere. And on the heels of the Queen’s Diamond Jubilee, we found it only fitting that we bring you a little British bling. Don’t fret, we are not suggesting that you wear it from head-to-toe but rather try sporting it on one item only. Our pick: the hard clutch – the most coveted accessory of the season.

Shell out the big bucks for this bejeweled flag bag or save your shekels and sport it on the cheap. Pair the iconic clutch with a crisp white shirt dress and navy espadrilles for an elegant look even the Queen would covet!