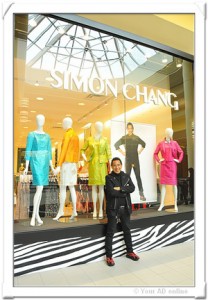 You couldn’t miss it – brightly adorned mannequins beamed out of the sleek white store, drawing in all sorts of shoppers to check out his wares.

Chang started designing in the 1970s with the idea of mixing European fashions with North American prices and he now oversees his business from Montreal.

His clothing for spring is bright, embellished and the line had unique suiting pieces as well as both long patterned chiffon maxi dresses and short numbers with fun necklines. He told me he wanted to create a line that was versatile with a bit of fantasy – work clothes for the way women are today.

“Don’t be a slave to fashion,” said Chang. He described a lot of the current clothing trends as “a sea of sameness” so he wanted to create a customized look for individual women so they could pair interesting separates and diversify their look.

When I asked him what his target age was, he said any age. He said that mothers and daughters shopped his collection together. I could see what he meant. The store stocked everything from fitted jackets to cutesy dresses.

Chang’s line also comes in accessible sizes, ranging from 4 to 16. “Designers should not discriminate body or sizes,” said Chang. Finally, someone is actually listening to the consumer!

Chang’s contributions are not limited to his designs. In 2008, he was presented with the Order of Canada by Governor General Michaelle Jean for not only building a reputable fashion house but also for his work on the Simon Chang & Phyllis Levine Foundation that he helped found in 1987.

The store is open now so check it out if you’re looking for something different and the opportunity to support Canadian designers.