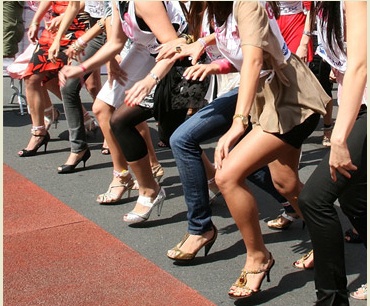 StyleSense not only has great shoe selection, but now they’re also giving you a run for your money. Coming up this Friday September 11th, you could win $10,000 just for running in your high heels. Sounds a bit insane doesn’t it? Well, if you’ve ever been to a sample sale or hell, even a normal sale you know that sprinting in heels is a bit precarious but often worth it. Besides, it will likely be hilarious for bystanders, though hopefully no one breaks anything (like their ankles). The first woman to cross the 100-metre race finish line in 3-inch heels will win the cash and walk (or hobble) away with bragging rights at the first ever Stiletto Sprint. And guess what? Guys can join the race too. There will be a separate race for males where they can win $1,000. So grab your hubby and encourage him to get practicing. No doubt your new running team will soon be the talk of the neighbourhood.

“We’re thrilled to be hosting this exciting event”, says Shannon Johnson of StyleSense. “Not only is the race a great opportunity for women who love shoes to showcase their dexterity in heels, but they will also be supporting a great cause in the process”.

Now for the even more fun part: All registration proceeds will go to Look Good Feel Better, a Canadian charity that helps women affected by cancer deal with the appearance-related effects of the disease.

Info for the event can be found on the StyleSense website. The race takes place at Ontario Place and the minimum $15 registration fee goes straight to Look Good Feel Better. Registration officially closes on Wednesday, August 26 but space is limited so if you want to do it go on their site asap. Even if you aren’t daring enough to compete you can check out City TV that will be broadcasting live the day of. And you can watch Breakfast Television’s Jennifer Valentyne don her best pair. I won’t be running myself  my knee probably couldn’t hack it – but I’ll definitely be watching this fun event unfold.