Of fabulous fragrance and frenchmen 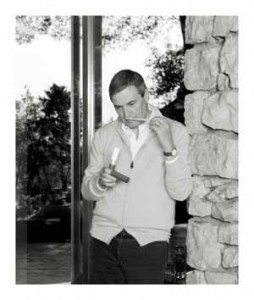 The house of Hermès, renowned for its celebrity-loving purses, makes amazing perfume. And although the handbags can cost as much as a car, the fragrances don’t.

I had the pleasure last week of having lunch with Jean-Claude Ellena, the Hermès perfumer. Well, actually, it wasn’t just him and I. We were joined by a small group of other journalists and hosted by the company’s Canadian president at her lovely home. The event was to mark the official launch of two new olfactory creations by Ellena, colognes actually: Pamplemousse Rose and Gentiane Blanche. Actually the event also marked the relaunching of sorts of Hermès’s sprightly Eau d’Orange Vert cologne.

Ellena has concocted some of my favourite Hermès scents since being named the official nose for Hermès in 2004: Kelly Caleche, Un Jardin Après La Mousson, and my absolute favourite, Terre d’ Hermès. (Strangers stop me routinely to ask what I’m wearing when I have it on. Note to self: Replace empty bottle.)

Ellena personifies my romantic notion of what a perfumer should be. He is elegant and well-dressed in a casual, classic way – white shirt, no tie, blazer, well pressed dress pants and good shoes; he has a slight tan but one you imagine was achieved wandering the far reaches of the world rather than lounging poolside on a chaise; he listens when you speak; he chooses his words carefully; he is a poet and a scientist; he is a husband and father, and he has a good laugh.

Sorry, I was talking about fragrances. Right.

Well, they’re colognes, so are meant to be splashed and rubbed on your skin. “Women are used to spritzing, it’s true,” says Ellena, “this is more intimate.”  He illustrates, caressing his arms as one would in the morning, mimicking the splashing and massaging on of a toilette onto freshly showered skin.

Pamplemousse Rose is a citrusy grapefruit splash made richer with the heady notes of the iconic garden bloom. The other fragrance, Gentiane Musk, is a deeper-smelling fragrance without cologne’s usual citrus kick. It’s got a creaminess to it that is different from vanilla but similarly milky without being sweet. It’s interesting, not my favourite, but sexy in an unexpected way.

The new scents don’t hit stores until May, but in the meantime, give yourself an hour and go on a perfume trip. Stop and smell the roses: Go check out some of the brand’s other toilettes. But first, do a little reading: Some of the beauty of perfume is the stories that lie behind their creation, and when you spritz it on, you have the ability to wear and carry with you that history and romance.