"No man would ever design this bra" 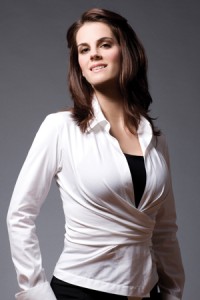 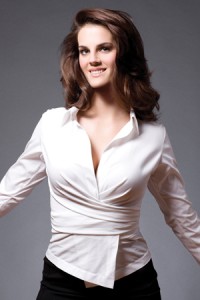 Andrea Clair has created a modesty bra called the 9to5. I had a good laugh when she said that “no man would ever design this bra.” How true. For years, bras have been created to enhance and push up any cleavage – generally to boost your boobs as much as possible. And now a bra has been created to conceal all of that.

And you know what? I wouldn’t say I’m that conservative and I think it’s a fabulous invention. Take this story for example.

During LG Fashion Week in Toronto I wore a black wrap dress out to some of the shows. Now I love a good wrap dress, whether it be from Diane Von Furstenberg or Joe Fresh, but they do have a tendency to be extremely low-cut. Halfway through socializing I realized that the top of my dress had slid down to expose part of my bra. How embarrassing. Luckily the event was almost entirely women, but really, no one wants their cleavage spilling out unnecessarily or inappropriately. Wearing a tank or tee under wrap dresses or gaping button-up shirts has always been my go-to solution but then they bunch up and add bulk to your middle. I’ve even tried double-sided tape but it can get messy.

And that’s why Clair started Wink Intimates. She wanted a work-appropriate bra top and after some sampling, designed the 9to5. It’s not made to minimize your bust.  There are soft padded cups and underwire underneath a layer of spandex and polyester that stretches across your chest. It’s really just to conceal cleavage and make some of your dinner party outfits a little more work appropriate. And it’s surprisingly not dowdy either.

This is clearly not me – but a great example of how much coverage the bra gives you.

Available online since early March, this bra costs $139, comes in black and white and can be worn under almost everything. Sizes 32B–38E.

It could just be that bra solution you’ve been looking for.