An entry-level job led December's Ms. Chatelaine to an unlikely career as a model and clothing designer. 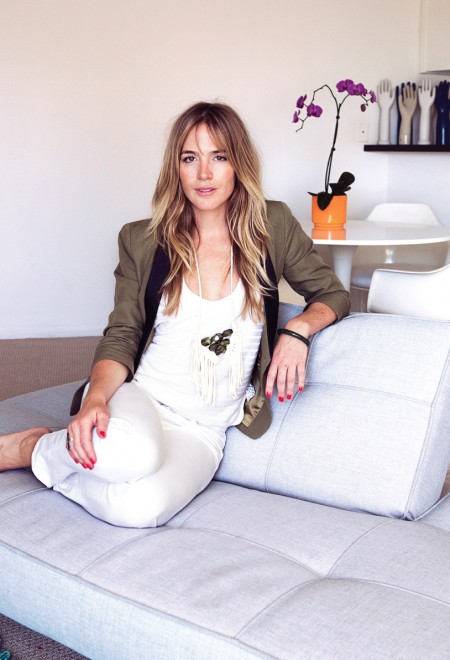 Lisa Priolo is not your average model. While five foot eight is considered short in the fashion industry, the petite beauty has come to represent one of Canada’s most successful labels. So how, with no modelling experience, did she land her sweet gig with Smythe, the brand famous for its stylish jackets that counts the Duchess of Cambridge among its fans?

In 2004, Lisa was assistant to the fashion director at Holt Renfrew’s corporate office in Toronto, where she became friends with buyer Andrea Lenczner. When Andrea left to start her own line with her partner Christie Smythe, their resources were limited, so they asked Lisa to pose for their lookbook (and to be paid in jackets). She happily obliged.

“I never think of myself as a model,” says Lisa, who now lives in the boho surf centre of L.A.’s Venice Beach and flies home for her shoots. “They like using me, because I look like a real person,” she says. (And she is: Eight years in, she still gets nervous before every photo shoot.) Snapped casually against a white wall, Lisa gave the lookbooks an unconventional and dynamic vibe that became synonymous with Smythe. “I get recognized all the time at showrooms,” she says.

Modelling’s not the only part of her career that was born out of a happy accident. Two years ago she launched a swimsuit line, Cali Dreaming, with her friend Carrie Jardine, another Canadian expat. “I was going on vacation and needed a simple bikini hat wouldn’t dig into my hips and booty,” she says. The savvy line includes a range of cuts and a nude palette to match skin tones and elongate the body, making it a big hit with women. And it scored with celebrities, too, worn by Rihanna, and by Kate Uptown on the cover of the 2012 Sports Illustrated Swimsuit Issue—the industry’s holy grail.

Lisa first discovered her affinity for fashion during her time at Holt Renfrew. In her role as assistant she began scouting new designers and collections. “I get an adrenaline rush when I find someone who is doing something differently… using a new clasp or an interesting fabric,” she says. That’s why in 2006 she moved to L.A. and started her own business sourcing lines for store buyers. She says the West Coast lifestyle has given her perspective on life balance. “The work hard, play hard thing is very real here,” she says.

Lisa was raised in Toronto by her mother, Carol, a single parent, whom she credits for her solid work ethic and drive. But when she’s not working, she seeks the thrill of the perfect find at thrift stores. “I’m obsessed with flea markets,” she says. Her two-storey apartment is a perfectly curated space where a piece of driftwood and her surfboard sit alongside a wall of macramé owls. When she’s back home, the first place she visits with her mom is the Kensington Market staple Courage My Love. “I know that if I go to a store like Barneys I can get Isabel Marant shoes, but there’s something about not knowing what I’ll find that really turns me on.”

My proudest moment was… receiving her first orders for Cali Dreaming.

I define downtime as… hanging out with my sister and girlfriends.

I wish I had more time to… see my family.

My favourite moment of the day is… waking up, feeling the sun and going for a run on the beach.

The biggest mistake I ever made was… There is no such thing as a mistake; we can only learn from any situation.

My guiltiest pleasure is… body scrubs at the Korean Spa.

My favourite pastime is… shopping at the Rose Bowl Flea Market.

1. Terax hair conditioner: “It’s a heavy conditioner from the ’70s that I use once a week for a boost.”

4. Bobbi Brown Shimmer Brick: “I’ve been using this forever. It gives skin a subtle glisten in lieu of blush.”

5. My Breville juicer: “I start every day with a green juice and a run on the beach before I hit my computer.”