Jane Birkin's Birkin up for auction

How much would you spend on the world’s most coveted handbag? If you’re a slave to fashion, or just simply love acquiring collectors’ items, then you may need to seriously consider this question as the “holy grail” of handbags is now available to the public. 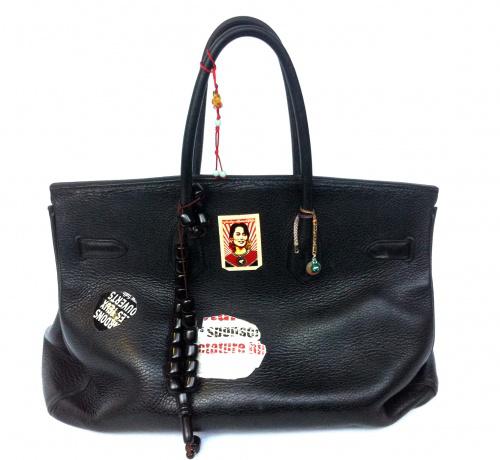 How much would you spend to acquire one the world’s most coveted handbag?

If you’re a slave to fashion, or just love getting your hands on collectors’ items, then you may need to seriously consider this question as the “holy grail” of handbags is now available to the public.

One of the original Hermès Birkin bags, signed and used by British style icon Jane Birkin herself, has been put up for auction on eBay to benefit Red Cross efforts in Japan.

Jane inspired the bag back in 1984 when she was sitting next to Jean-Louis Dumas (the Hermès President at the time), on a flight from Paris to London. After all the contents of her straw bag spilled from the overhead compartment, the two began talking about the perfect weekend bag, and the Hermès Birkin was born.

The bag has now become the ultimate status symbol (Samantha Jones had to drop Lucy Liu’s name on an episode of Sex and the City to avoid the dreaded wait-list for the bag), and is often seen on the arms of the fashion elite.

Out of the four Birkin bags Jane has owned, this is the third to be put up for auction. She revealed to Vogue.com that she refuses to pass down the iconic bags to her daughter Lou as she feels it is a “horrible thing to have a Birkin bag from your mother.”

But for those of you who lust over Victoria Beckham’s croc-skin, diamond hardware version, this Birkin may not be the bag for you.

The black bag has been used (and arguably, abused) for a good five years, and has traveled all over the world, including Haiti, where Jane sang for earthquake survivors. It’s covered in stickers and worry beads, as Jane does not like her bag “looking like everyone else’s.”

And those with cat allergies may opt not to bid for this bag either.

“There’s no fun in a bag if it’s not kicked around, so that it looks as if the cat’s been sitting on it – and it usually has,” she says. “The cat may even be in it!”

But, if you’re ever lacking an umbrella, Jane suggests using your Birkin as an alternative. “A Birkin bag is a very good rain hat; just put everything else in a plastic bag.”

The Birkin bag will be up for auction on eBay until April 15 at 2 p.m. EDT.