We Tried The New Dyson Hair Straightener On 5 Hair Types 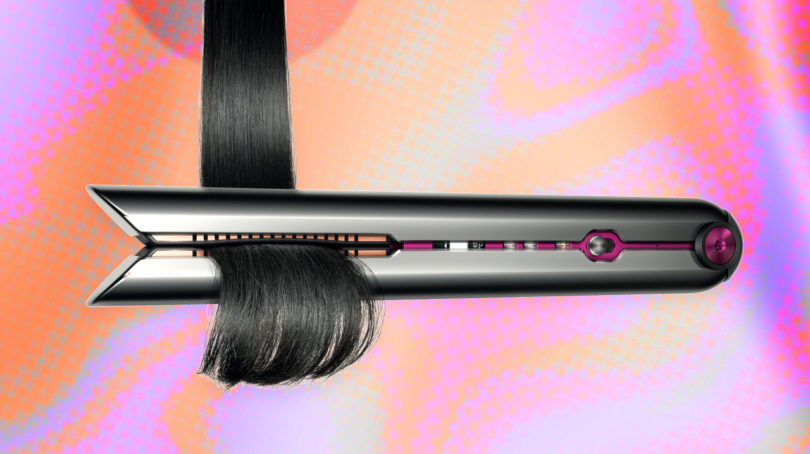 The beauty world was buzzing this week with the much-anticipated launch of Dyson’s newest hair tool: Meet the Corrale, a cordless hair straightener with seriously impressive specs—and an equally eyebrow-raising price tag.

Following the wild success of its revolutionary Supersonic hair dryer and Airwrap curling system, launched in 2016 and 2018 respectively, Dyson has completed the hair tool trifecta with its latest offering, which claims to straighten hair with 50% less damage than a conventional flat iron. It achieves this thanks to patented flexing plates that apply even heat and tension so that you only need one pass to achieve A+ results, whether you’re looking to get pin-straight hair or perfect flat-iron waves.

But at $650, is it really *that* much better than the straightener currently taking up tenancy under your bathroom sink? We tried it on five different hair types—from naturally straight-ish to 3B curls—to find out. Read on to see what our staff thought about the new Dyson Corrale hair straightener.

“Because I have fairly short hair that’s coloured (a.k.a. dry and damaged) my hair typically dries pretty quickly and doesn’t take long to style and straighten. I would say I could straighten my whole head—or add a natural wave with a flat iron—in about five minutes. With the Corrale, I was able to create a wave in my hair even quicker than usual. I didn’t have to repeatedly go over the same areas of my hair to achieve the style, just one pass through was enough.

After using the Corrale my hair was so smooth and shiny. Thanks to the design of the flexing plates, it allows you to turn down the heat, which is a big deal on hair as dry and damaged as mine. I often have an issue with flat irons leaving a dent in my hair when I try to create a wave and I didn’t get any dents with this one. It just gave a nice and smooth finish. Because it’s cordless and battery-powered, it did feel a tad heavy in my hand initially, but I adjusted to the weight quickly.” — Emily MacCulloch, freelance beauty writer

“I haven’t worn my hair stick-straight in years—most days, I spend about 20 minutes curling my thick, long-ish hair (or I hit the snooze button and go for the messy bun). I was curious to get my hands on the Dyson Corrale to see if I could use its promising flexing plate technology to recreate my signature glossy waves in less time than it typically takes with my curling wand.

On the medium heat setting, styling my whole head took about half the time it usually does. I loved the resulting effortless waves, and a colleague even noticed that my hair looked shinier, but I also had more fly-aways than usual. I think this would work even better on second-day hair.

The biggest selling point for me is the fact that it’s cordless. Not getting tangled as I worked on the back of my head was surprisingly freeing. I could definitely get used to styling my hair this quickly and effortlessly every day.” — Andréanne Dion, associate lifestyle editor, Chatelaine

“If I’m doing the whole shebang (wash, mask, blowout with a round brush, straighten), the straightening part of my normal routine takes about 15 minutes. With the Dyson, it took around six minutes. I really liked that you didn’t feel a lot of heat emanating from the iron itself, nor did my hair feel scalding to the touch after a pass of the straightener. (Who amongst us hasn’t gotten a mild contact burn from touching their torched hair after a particularly ferocious pass of the iron??)

Real talk: I found the Corrale very heavy compared to most flat irons I’ve used. It didn’t bother me, per se, but the heft was noticeable. At first, I was unmoved by the cordless aspect since I usually do my hair at home with a very convenient outlet, but realized it would be very handy for using on the go (read: in the office bathroom) and while travelling.” — Jennifer Berry, managing editor, FLARE

“Pin-straight hair was pretty much a social requirement for much of my high school years. I have a lot of bad memories of fried hair and the smell of burned hairspray, and haven’t used hair straighteners much since. I could get into this one, though. It’s cordless, lightweight and got through my whole head of bicep-length hair in about 10 minutes—a job that usually takes twice as long. (I’ve got a lot of hair!) It’s also just about the right circumference to make generously sized curls that don’t look like corkscrews. But does this justify the price? As someone who prefers air-dried, wavy hair and maybe the occasional pass with a blow dry and brush, I’m not so sure.” — Chantal Braganza, senior editor, Chatelaine

“I’ve only straightened my short hair once, when it was even shorter than it is now, and that took close to an hour because of how many small sections I had to divide it into. When my hair was longer, it would take upwards of two hours to get it all straightened. With the Dyson, on my current chin-length hair, it took about 45 minutes.

I tested each of the three heat settings to see what worked best for me, and the middle setting was enough to get most of my hair straightened in two passes. Because of the thickness of the tool, I did find it difficult to get really close to my roots and the nape of my neck where the shortest layers are, though. I’m not sure if it’s due to the straightener or me taking better care of my hair lately, but I noticed fewer fly-aways than usual.” – Elham Numan, freelance graphic designer