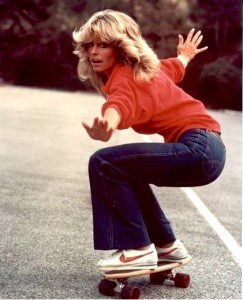 Our style intern Melissa gives the scoop on the latest:

I felt a deep sadness when I found out that Farrah Fawcett had passed away. Why just this past Saturday I sat in my hairdresser’s chair with three photos of her in my hands and the hopes of emulating her famous locks. The “Rachel”of the 70’s, every woman, no matter the colour or texture of her hair, had to have this look. Yet unlike the trendy Rachel, the Farrah is timeless.

I came home and opened my laptop to see her coming straight at me on a skateboard, arms splayed, mouth gaping open, her beautiful flowing ultra-feminine hair juxtaposed alongside her modest outfit of jeans, sweater and Nike running shoes. Sexy, yet practical. That is what I truly loved about Farrah.  The most inspiring women in my life share this look ‘ attention-grabbing tresses paired with a secretly smart, assertive attitude and casual attire.

Farrah had a presence about her, not only in teenage boys bedroom walls and fantasies, but as a confident yet likeable woman, someone you would want to have a coffee with and discuss the meaning of life. She will always be remembered for her role as Jill Munroe in Charlie’s Angels ‘ the sexy private investigator with the incredible hair and body, but she was more than just a sex symbol.

Farrah wanted to be taken seriously as an actress, having ditched her degree in microbiology to pursue her acting dream. Her resistance to pose nude in the 1970’s and 80’s at her peak popularity, then choosing to go for it in her late 40’s and early 50’s confirmed her sexual confidence.

Near the end of her life, she lost her trademark hair but kept her fighting attitude. Documenting her struggle with cancer as another way to demonstrate her realness, unlike the usual examination of pop-cultural icons. Farrah will be missed by many. I will personally keep her memory alive in the flips of my curly layers and the casual sexiness of my high-waisted jeans.