How Bright Hair, Multiple Tattoos And A Septum Piercing Helped Me Find Myself—At 35

My appearance is a visual representation of all the other things in life I have defied, like choosing not to get married or have kids. 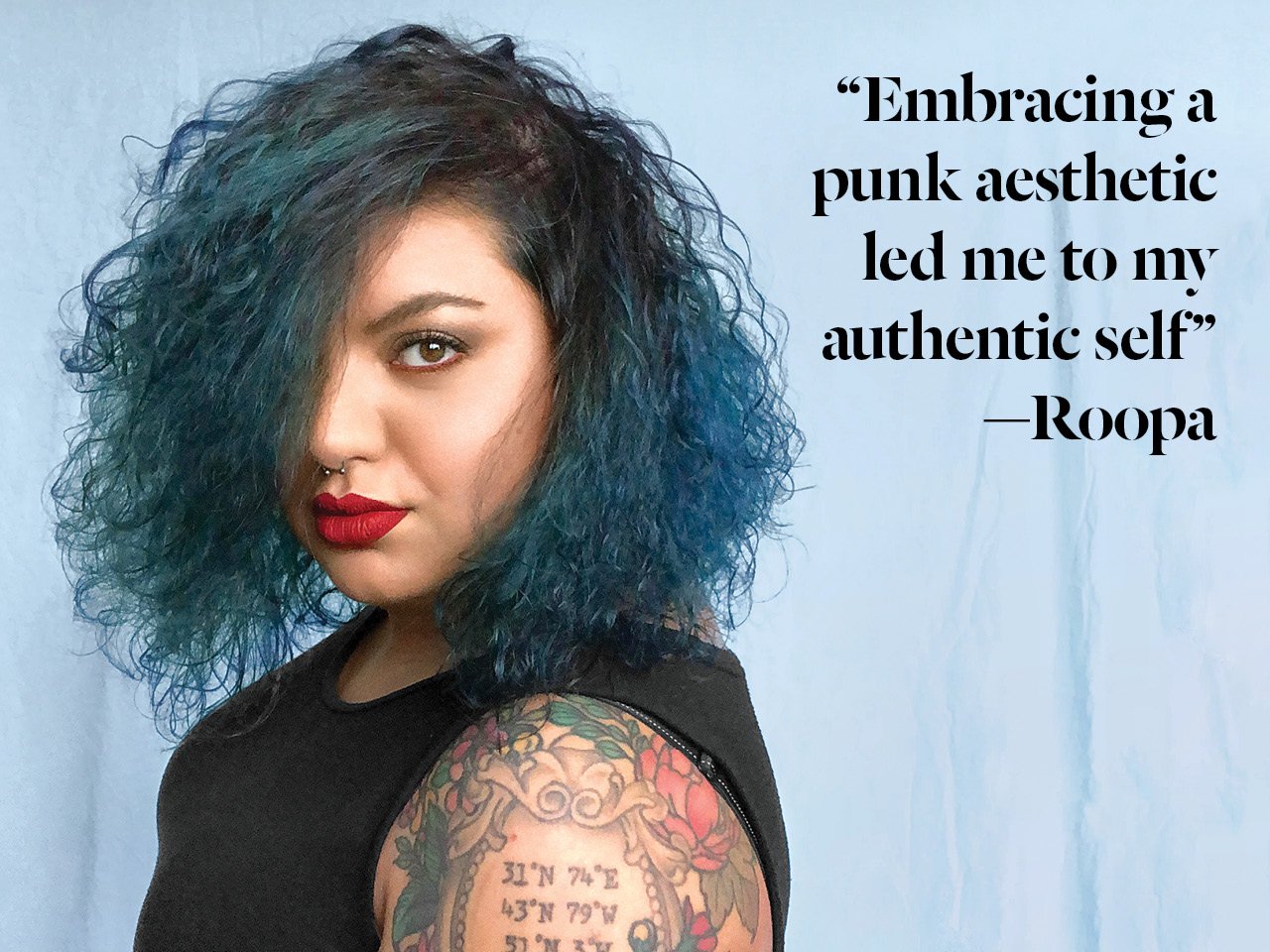 I was born in 1980 and started to come of age during the rock/punk/metal/grunge era. I was heavily influenced by that, and also by my eldest sister, who always wore bold lipstick and perfectly thick black eyeliner.

I started sneaking makeup to school in grade 7, even though my father said his daughters weren’t allowed to wear it until high school. (That was generous: In my culture, you’re actually not supposed to wear makeup until you’re married.)

By the time I was 17 or 18, I had bought my first tube of Ruby Woo—M.A.C’s iconic red lipstick—and my dad hated it. To him, I looked like a punk who was doing bad things. But I wasn’t; I was getting good grades and working at a part-time job like my friends. He would say things like, “Who’ll marry you looking like that?” But I know he didn’t say it to bring me down; instead, he was doing his due diligence as an Indian dad.

I just didn’t look the way my culture expected me to look. I think my appearance is a visual representation of all the other things in life I have defied, like choosing not to get married or have children. You don’t walk around looking like I do without having serious confidence. And there’s nothing some people despise more than a confident woman who has made different choices for herself.

There was a brief moment, when I completed teacher’s college and started my career, where I thought I had to “grow up”—so I took out my facial piercings and stopped putting bright streaks in my hair. But it didn’t feel right. Eventually I thought, “Why am I trying to be somebody I’m not?”

And so, I started to dye my hair again and push back against what a teacher in her 30s is “supposed” to look like. When I hit 35, it was full steam ahead in terms of getting back to my rocker-chick roots: I had my septum pierced and I got a bunch of tattoos (14 in total). I became a better teacher because I could be more authentically myself. I’m the most comfortable I’ve ever been with my appearance.

Now, I post selfies on Instagram and Twitter on a near-daily basis and encourage others—particularly other BIPOC folks—to do the same, using a hashtag I created, #DecolonialSelfies. I was inspired by a quote from a 20th-century Black psychiatrist and political philosopher named Frantz Fanon: “Since the Other was reluctant to recognize me, there was only one answer: to make myself known.”

The series is about challenging hegemonic notions of beauty and creating content that I didn’t see when I was growing up. I spent my childhood in a white town, and my look was an armour to protect me from the racism I saw my parents dealing with. Now, I’m trying to come back to my Punjabi and Sikh roots—but I’m not going to change to fit into anybody’s idea of what I should look like. Being a rocker chick doesn’t make me less Punjabi, and I want everyone to know that.

In 2016, when I was 36, my father died suddenly. Later, when my sisters and I were going through his stuff, we found his wallet. In the sleeve where most dads would store photos of their kids or grandkids, he had a picture of his damn self! We laughed so hard. It made me feel like my #DecolonialSelfies have a bit of his spirit in them.

I hope you enjoyed reading this article from Chatelaine. Our team is working hard to create quality content that informs and inspires during this challenging time.

But making a magazine—and the stories we put online—isn’t free. Chatelaine is built on the hard work and dedication of our writers, editors and production staff. If you can afford it, buying a subscription to our print magazine is a great way to support the work we do—and our team would truly appreciate it. Right now, there’s an amazing offer on: $5 for three issues.