How to spot a fashion trend 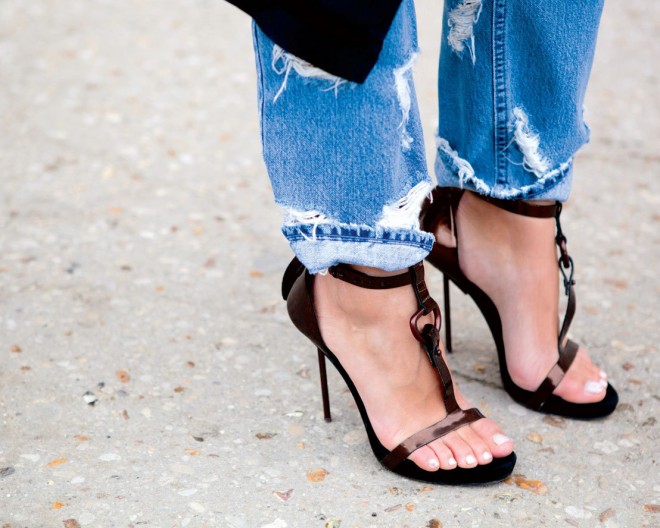 When do you know that what you are seeing really will influence a lot of people and is not just something that you like personally? A few tips:

Does it make you feel uncomfortable?
All the most powerful trends start small. Think skinny jeans. Five years ago they looked just plain wrong to Canadian women who were happy in their boot-cuts, thank you very much. The first time you noticed a pair of skinny jeans, did you think, “There’s no way you will ever see me in those”? That’s how most people reacted. The first women to wear them were in the music and fashion scene and chose them because they looked different. It took about three years for skinny jeans to become the norm—but now it’s difficult to spot a woman anywhere in the world who isn’t wearing a pair.

Are you bored?
If you see everyone wearing the same thing (except for skinny jeans—more on that later), it could be you’ve just spotted a gap in the market. Fashion abhors a vacuum; once a woman is bored by what she’s wearing, she’ll look for something different. So if you see too many florals this spring, the trend forecaster in you will be hankering for something more graphic. Watch that space; somewhere a designer will be thinking the same thing.

Stop and look around you.
We are all guilty of focusing on the next item on the to-do list and forgetting about the world around us. Trend trackers are paid to slow down and smell the roses. When you do, it’s amazing what you notice, whether it is a fascination with a particular colour or bloom, or the fact that everyone is talking about Canada’s Got Talent. Go for a walk and pay attention to the things you don’t normally, from the colour of a shop sign to the oversized sunglasses on the woman walking past you. You’ll arrive back home refreshed and thinking about fashion and style in a new way.

Trends can pop up anywhere.
In fact, street trends are called bubble-up trends because they literally bubble up out of nowhere. Music, film, TV shows and street fashion can all inspire a designer. If you look at the collections of the top designers, you’ll notice that just as often as they’re inspired by a trip to an exotic country, they’ll have been influenced by a street culture trend from the skate or indie music world.

Your world is bigger than you think.
Social media, Facebook, blogs and Twitter have all contributed to the creation of a tightly knit global fashion community. Thanks to our digital age, fashion trends can spread around the world in days and weeks rather than months or years as it was a decade ago. You could live in Winnipeg but see a street shot of a girl in Stockholm who has a style you love—it’s easy enough to replicate. Fashion is far more democratic than it has ever been. And for trend trackers, far more exciting.

Some trends never die.
Back to those skinny jeans. Designers have tried to get women to try anything but their skinnies — flared, bootcut, high-waisted jeans—but no one is budging! Sometimes a trend becomes a staple.

Juliet Warkentin is chief creative officer of Stylistpick.com, an online fashion site. She was content director for WGSN, the leading online trend analysis firm, and editor in chief of Marie Claire (U.K.) and Toronto Life Fashion.